The moon and Mercury – innermost planet of our solar system – had a great meeting these past hours. Here, Gianluca Masi of the Virtual Telescope Project presents some shots capturing this exclusive show, hanging over the skyline of Rome. 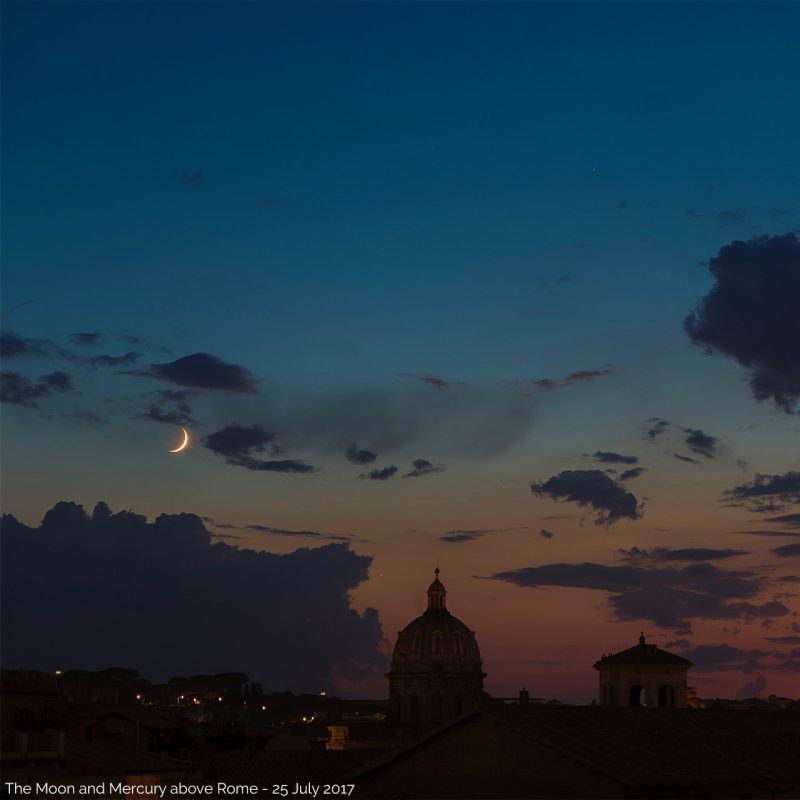 View larger, full image. | The moon and Mercury above the western horizon on July 25, 2017. Mercury is just to the left of the dome. Photo by Gianluca Masi/ Virtual Telescope Project. Used with permission.

This July 30, Mercury reaches its (eastern) greatest elongation of the year, shining soon after sunset. Everyone with some astronomical background knows that, being Mercury orbiting the sun much closer than us (its distance from our star is less than half that of the Earth), it never shows at night, but only at twilight, low on the horizon. This makes its observation not easy, to the point that you can spend your entire life without seeing it, if you do not explicitly look for it .

So, when a famous and easier object – like the moon – couples with it, we have a great opportunity to catch Mercury right away. 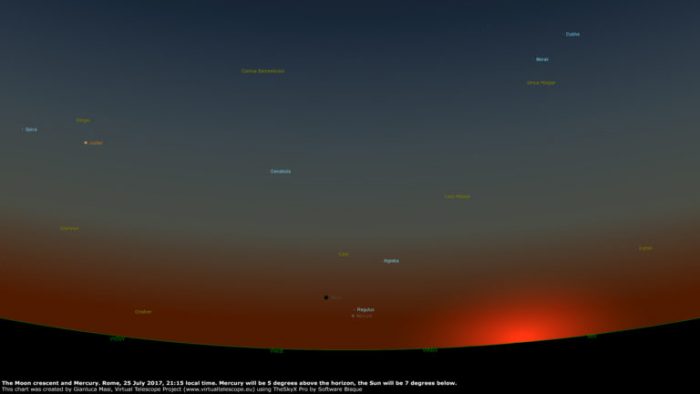 View larger. | Star chart showing the moon and Mercury at sunset, on 25 July 2017, via Gianluca Masi.

Such an opportunity was yesterday, when our satellite and Mercury had a nice, wide conjunction at sunset, with our satellite showing a sharp, young crescent. I have been admiring Mercury on regular basis, always choosing my observing site to include some spectacular panorama and so I did also this time. Being in Rome, I honestly have a number of great places, and I decided to reach the Capitoline Hill area, with my cameras, lenses and tripod.

When I arrived, there were quite a lot of clouds all around and it was not obvious I could do any observing or imaging at all. It was almost ready to rain, something not to blame, considering the lack of water in the area we are suffering this summer in Italy. But the conditions improved in a few minutes, offering a marvelous sunset, full of colors. I managed to mount my setup: two Canon 7D mark II DSLR bodies, with different lenses (EF 70-200mm f/2.8 L IS II USM and EF-S 17-55mm f/2.8 IS USM) and a sturdy tripod. 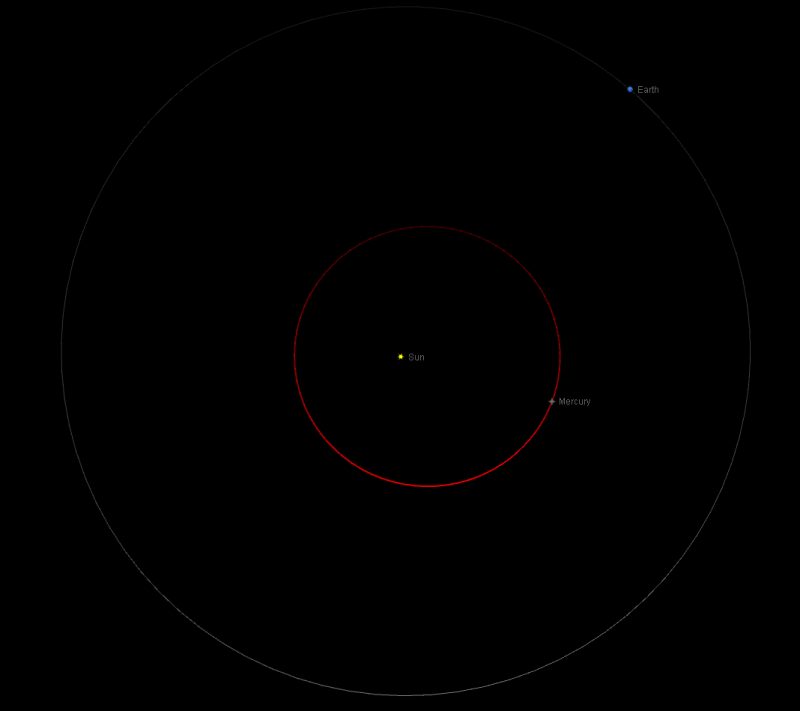 View larger. | Earth and Mercury as seen from above the solar system, via Gianluca Masi/ Virtual Telescope Project.

At some point, the moon popped out with its sharp crescent, gently playing with some light clouds. It really was a magnificent vision, making my hopes to spot Mercury real, but I still had to wait for some more darkness. 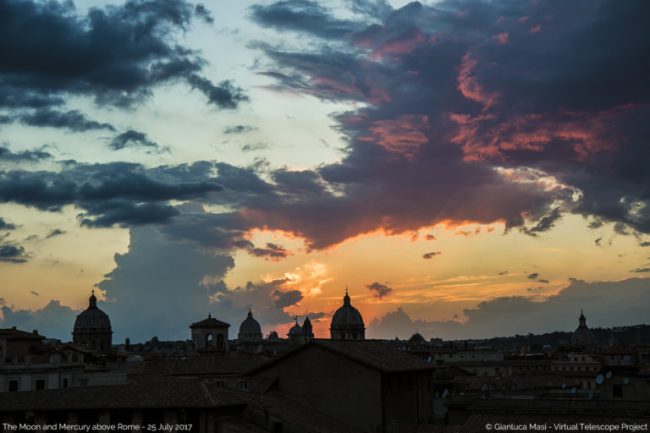 At sunset, plenty of amazing colors and scattered clouds, not sure to see Mercury. Photo by Gianluca Masi/ Virtual Telescope Project. Used with permission. 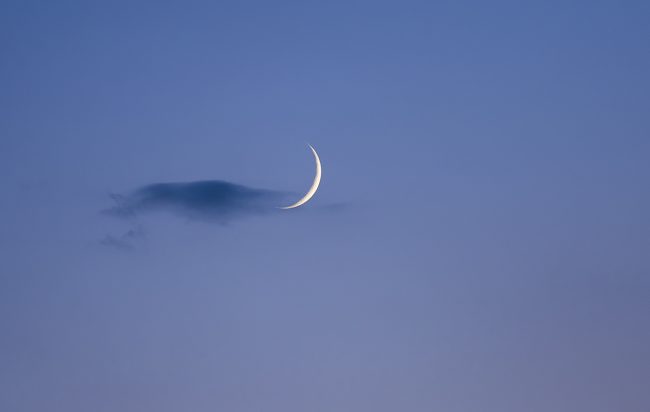 Minute after minute, the sky darkened and clouds dissolved, while some of them were still sitting on where Mercury was supposed to be. I decided to start imaging and a few seconds later I spotted Mercury! It was not easy to see it at the beginning, as the sky background we brighter because of some residual clouds… but what a wonderful sight! 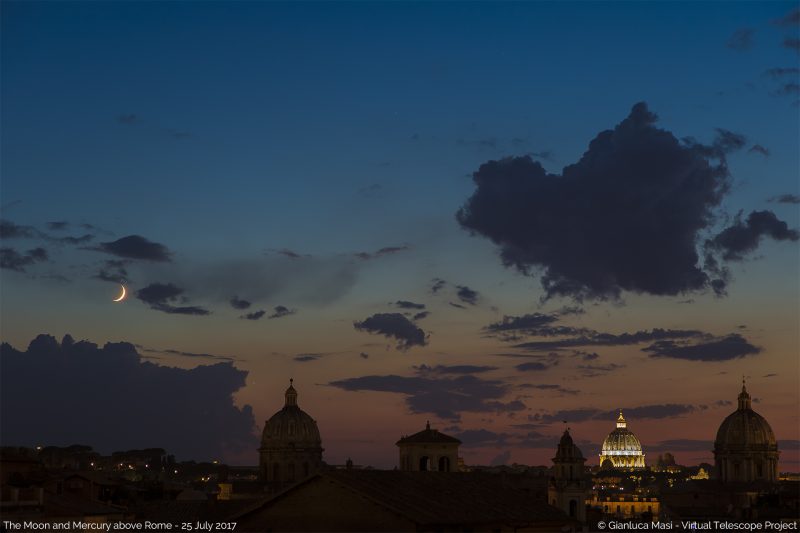 View larger. | The moon and Mercury above the western horizon, with the St. Peter’s Dome on the right. Photo by Gianluca Masi/ Virtual Telescope Project. Used with permission.

In the picture above, you can find mercury of the left of the leftmost dome. The star Regulus in close to Mercury, too, a bit higher in the sky than the planet. It was hard to move my eyes away from that vision and swap my cameras and lenses, but I succeeded capturing some frames really preserving the magic I could see. Imaging such a subject, with a continuously changing light/background is not easy, you really risk to miss something and destroy the atmosphere, this is where experience matters.

I worked to have a significant part of the skyline included and I hope the results are good enough to bring to you what I could see, being the only one there in that moment, enjoying all this. 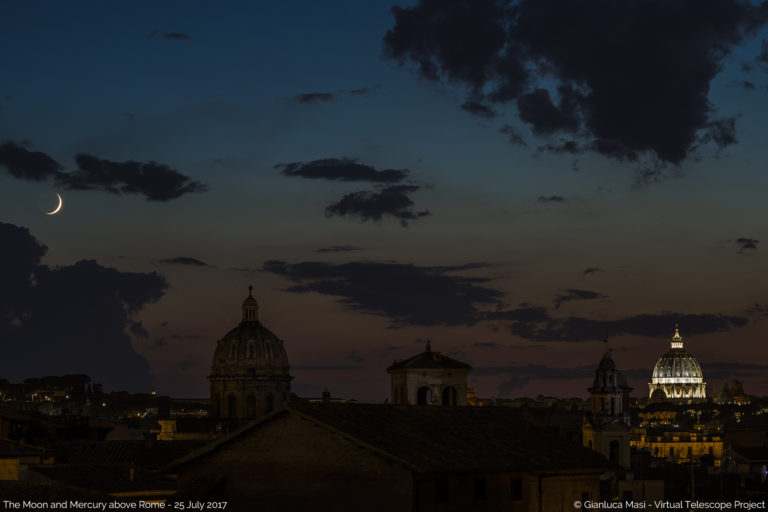 Soon, It was time to say goodbye. I could see a beautiful moon with a stunning Earthshine showing its full disk. Mercury was already gone. The sky was now almost clear on the west and it really offered me a unique experience. Thanks! 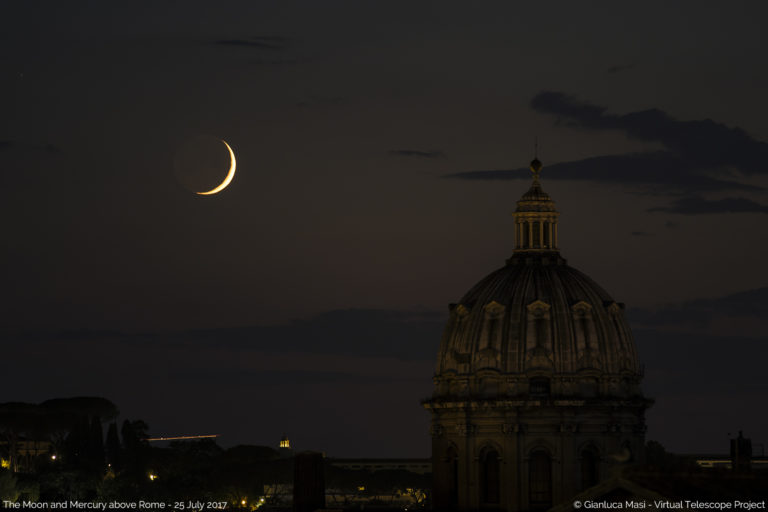 Goodbye Moon, thanks for the show. Photo by Gianluca Masi/ Virtual Telescope Project. Used with permission.

Bottom line: A capture of the moon and Mercury – and the star Regulus – after sunset on July 25, 2017, by Gianluca Masi of the Virtual Telescope Project in Rome.