Deep into the dark months of the year – 508 miles (817 km) from the North Pole – a photo of the moon and morning planets. 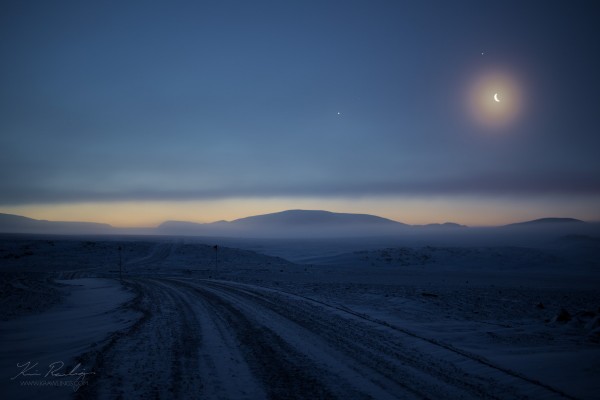 Kevin Rawlings submitted this photo of the moon and three planets – taken November 6, 2015 at 9:37 a.m. EST – from the northernmost permanently inhabited place in the world, Alert, in the territory of Nunavut in Canada. In this photo, Venus is the brightest planet, on the left. Much-fainter Mars is closely above and to the right of Venus; be sure to view larger and look closely because Venus outshines Mars by some 250 times. Jupiter is next to the moon. Kevin wrote:

This photo of the waning crescent moon in conjunction with Venus, Jupiter, and Mars was taken on my drive to work here at CFS Alert, Nunavut, Canada, the world’s northernmost inhabited place. We’re deep into the dark months of the year; the sun won’t rise again until early March, and each day the horizon gets dimmer. As the operator of the Global Atmosphere Watch observatory here in Alert, I am one of the lucky few people who gets away from the lights of the station to experience the polar darkness on a daily basis, a thrill that I doubt will ever wear off.

Taken in RAW, processed with Rawtherapee. Slight contrast and color enhancement, no cropping or other effects used.

Thank you, Kevin, for sharing a sight that few of us will ever experience.

Alert, by the way, is at latitude 82°30’05” north. It’s 508 miles (817 km) from the North Pole. The 2011 census reported its permanent population as zero, but military and science personnel do rotate in and out of the place. 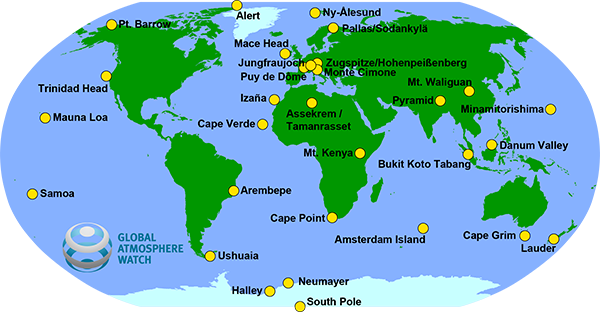 The organization Kevin Rawlings works for – the Global Atmospheric Watch of the World Meteorological Organization – coordinates activities and data from 30 stations around the world. On its website, it says its mission is to: “provide reliable scientific data and information on the chemical composition of the atmosphere, its natural and anthropogenic change, and help to improve the understanding of interactions between the atmosphere, the oceans and the biosphere.”