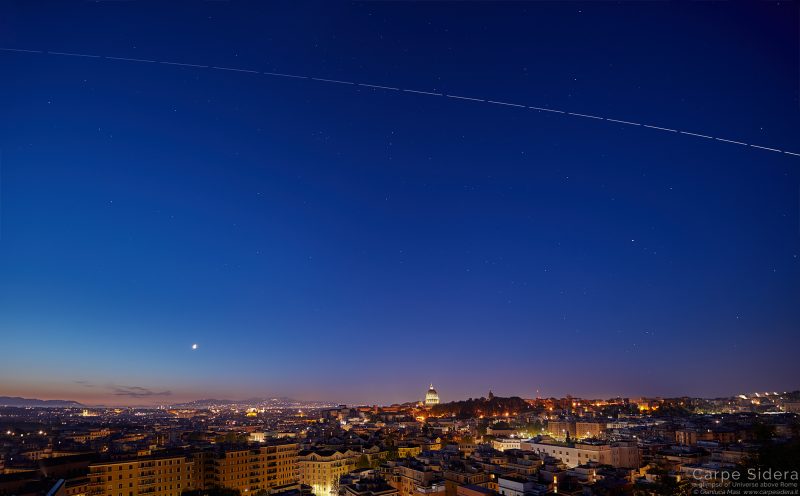 Bright pass of the International Space Station above Rome, Italy, on April 30, 2019, via Gianluca Masi of the Virtual Telescope Project. The bright object at the lower left, above the skyline, is the moon. Look below for Gianluca’s 2nd image, on which he’s identified constellations and planets.

Gianluca Masi captured the images on this page on April 30, 2019. He later wrote of the experience:

I set the clock to ring at 4:20 a.m., to have enough time to wake up, drink a strong coffee and reach the place. The outdoor temperature was quite cool for late April, but the sky was clear, though there were some unpredictable clouds all around.

In 20 minutes I reached the site I selected, in northern Rome, carefully setting up my imaging gear: a Canon 5D mIV body and the unique Canon EF 11-24 mm f/4L USM lens, the largest rectilinear zoom ever produced. This lens is simply outstanding to cover large areas of the sky, still producing a rectilinear perspective, before to go with a fish-eye lens.

I managed to put the imaging devices on a solid tripod, finally attaching to the camera an electronic timer, to capture the imaging sequence I had in mind. All was ready, I had to wait for 20 minutes or so for the International Space Station. I used those remaining minutes to carefully choose the imaging direction, to include a nice part of Rome and covering the most interesting portion of the transit. A sharp Moon crescent was also above the horizon, with planets Jupiter and Saturn joining the show.

Time run and the ISS made its apparition in the sky, so I started my imaging sequence. The camera did the entire job I programmed, so I could enjoy the pass with my own eyes, with the panorama I had in front of me: how superb it was!

During the pass, which lasted a few minutes, the light of dawn increased significantly, offering one of the best sight on the Eternal City I had recently. These events never fail to bring to me a sense of beauty, which is one of the reasons why I’m always ready to go outdoor for them, no matter the time …

I hope this experience will help people discovering that the night sky is such a wonderful, precious part of the natural world, inspiring them to preserve its immense cultural heritage and value against light pollution. Observing the stars from our cities, where we suffer the strong effects of light pollution, we can feel ourselves even more convinced to actively promote a less invasive, more smart way to use artificial lights, preserving the natural environment and eliminating the money wasted to send light up in the sky. I’m proud to be an ambassador of the Dark Skies for All program of the International Astronomical Union, sharing the same vision and goal. 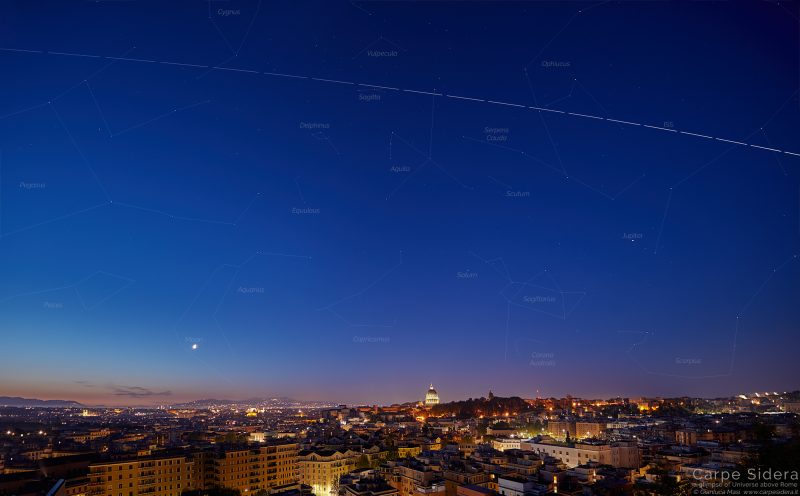 View larger. | The track of the International Space Station passing above Rome on April 30, 2019, via Gianluca Masi of the Virtual Telescope Project. He wrote: “I managed to draw the constellations’ figures, write their names and add the moon, Saturn and Jupiter labels, too.”

Bottom line: A bright pass of the International Space Station above Rome, the Eternal City.