Europe’s CryoSat satellite was used – over 7 years – to track 10,000 miles (16,000 km) of Antarctic coastline. It can be seen warm ocean water is eating away at Antarctica’s floating margins. 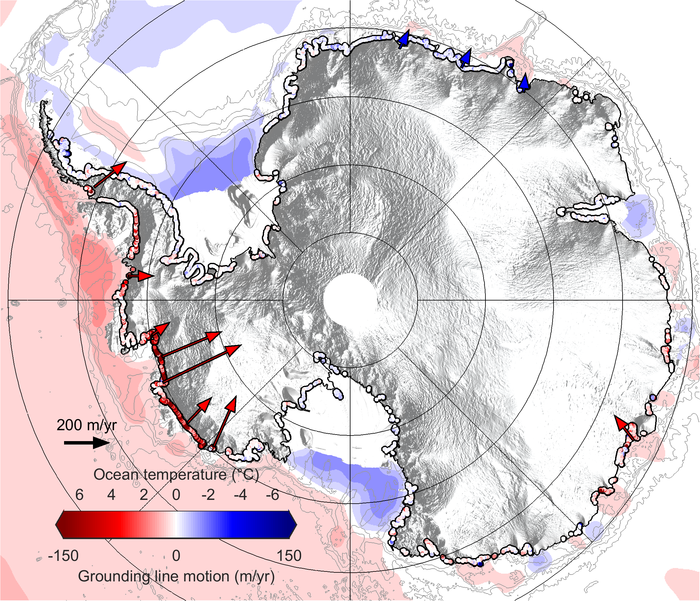 View larger. | Illustration of the rates of grounding line migration around Antarctica between 2010 and 2016, via ESA.

The European Space Agency said on April 3, 2018, that its CryoSat satellite mission has revealed a shifting inward of the grounding lines of ice sheets in Antarctica. Over the last seven years, according to ESA, Antarctica has lost an area of underwater ice nearly the size of Greater London (about 90 miles, or 140 km across, according to Britannica.com). ESA said the grounding lines – the place where the base of Antarctic ice sheets leave the seabed and begin to float – is shifting inward. ESA said:

… warm ocean water beneath the continent’s floating margins is eating away at the ice attached to the seabed.

ESA said that between 2010 and 2017, the Southern Ocean melted about 565 square miles (1463 sq km) of underwater ice. A paper describing these results is published in the peer-reviewed journal Nature Geoscience. The paper describes how CryoSat was used to map grounding-line motion along nearly 10,000 miles (16,000 km) of Antarctic coastline, over seven years.

Bottom line: Illustration of shifting grounding lines of Antarctic ice sheets, over the last seven years, with data provided by an ESA satellite.