If we could see Mars in ultraviolet …

We’d see how winds circulate at high altitudes, and how ozone amounts change over the seasons, and how afternoon clouds form over giant Martian volcanoes. Images here. 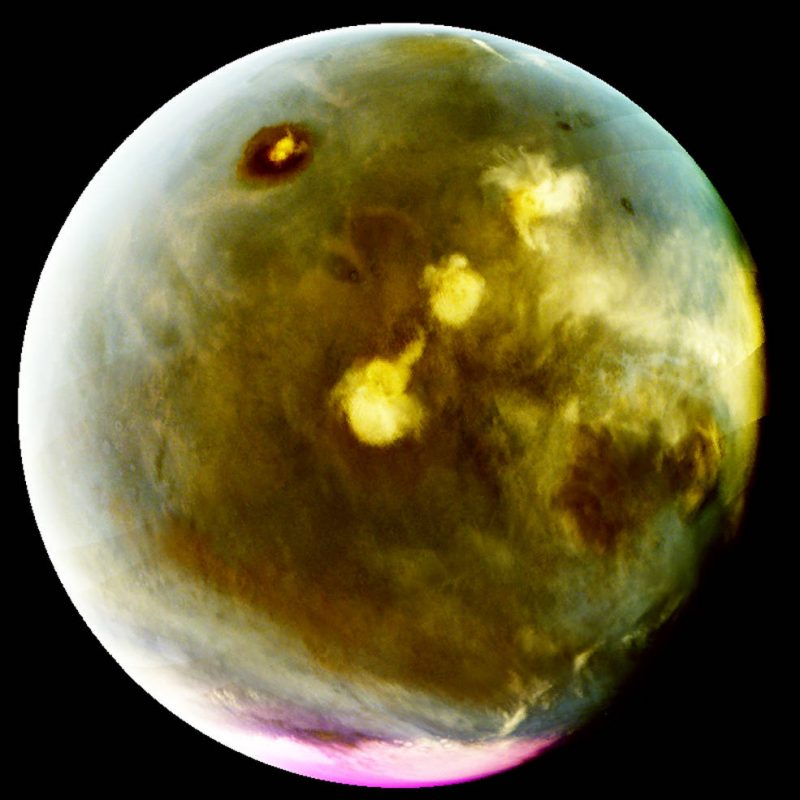 Notice the clouds, in yellow. The ultraviolet colors of the planet have been rendered in false color, to show what we would see with ultraviolet-sensitive eyes. Image via NASA/MAVEN/University of Colorado.

If we had superman eyes (of sorts) and could see in high-energy ultraviolet, we could gaze toward Mars and see what a camera on the MAVEN mission has been seeing. The MAVEN mission – which recently celebrated its first full year on Mars (a martian year is about two Earth-years long) – released new global images of Mars on October 17, 2016, including the first images of “nightglow” on the Red Planet (see below). The scientists say the MAVEN images that can be used to show how winds circulate at high altitudes on Mars, and how ozone amounts change over the seasons, and how afternoon clouds form over giant Martian volcanoes.

The Imaging UltraViolet Spectrograph (IUVS) on MAVEN (which stands for the Mars Atmosphere and Volatile Evolution) acquired the images, which you see on this page.

The one at the top of the page shows clouds on Mars on July 9-10, 2016. Mars’ tallest volcano, Olympus Mons is the prominent dark region near the top of the image. You can see a small white cloud at the summit that grows during the day.

Three more volcanoes appear in a diagonal row, with their cloud cover in yellow.

Like it? Then you’ll also enjoy the video below – also from July 9-10, 2016 – showing how the clouds rapid cloud formation on Mars. Look at those three diagonal yellow clouds again, and notice that they merge, spanning up to a thousand miles, by the end of the martian day..

Once again, the ultraviolet colors of the planet have been rendered in false color, to show what we would see with ultraviolet-sensitive eyes.

The movie uses four MAVEN images to show about 7 hours of Mars rotation during this period, and interleaves simulated views that would be seen between the four images. Mars’ day is similar to Earth’s, so the movie shows just over a quarter day. The left part of the planet is in morning and the right side in afternoon.

As in the image at the top of the page, notice Mars’ prominent volcanoes in the movie. They are topped with white clouds, which can be seen moving across the disk. Mars’ tallest volcano, Olympus Mons is the prominent dark region near the top of the images, with a small white cloud at the summit that grows during the day. Olympus Mons appears dark because the volcano rises up above much of the hazy atmosphere which makes the rest of the planet appear lighter.

Another view of MAVEN’s view of rapid cloud formation on Mars on July 9-10, 2016, via NASA/MAVEN/University of Colorado.

The scientists say these images are particularly interesting because they show how rapidly and extensively the clouds topping the volcanoes form in the afternoon. They said:

Similar processes occur at Earth, with the flow of winds over mountains creating clouds. Afternoon cloud formation is a common occurrence in the American West, especially during the summer.

This next image is a very cool one, showing Mars’ nightside in ultraviolet … 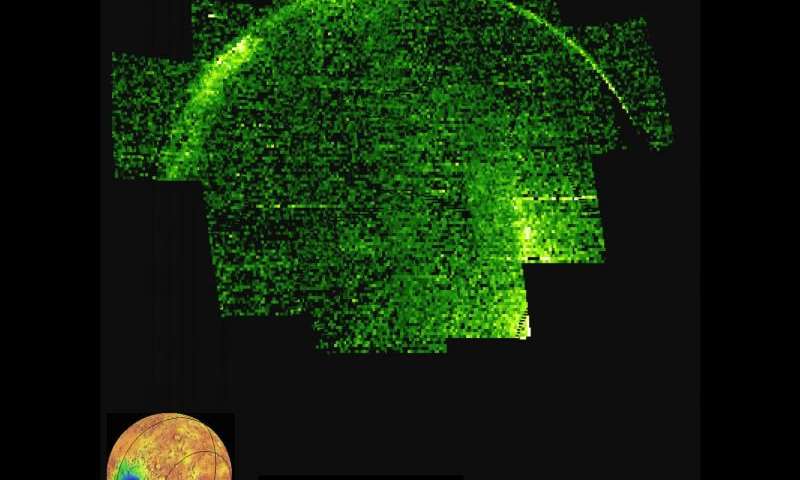 A false-color image of Mars’ nightside at ultraviolet wavelengths from the MAVEN spacecraft, acquired May 4, 2016 during late winter in Mars Southern Hemisphere. The inset shows the viewing geometry on the planet. Image via NASA/MAVEN/University of Colorado.

The image above is in false color with black as low emission values, green as medium, and white as high. MAVEN scientists say these emissions track the recombination of atomic nitrogen and oxygen produced on Mars’ dayside, and reveal the circulation patterns of the atmosphere.

The splotches, streaks and other irregularities in the image are indications that atmospheric patterns are extremely variable on Mars’ nightside. 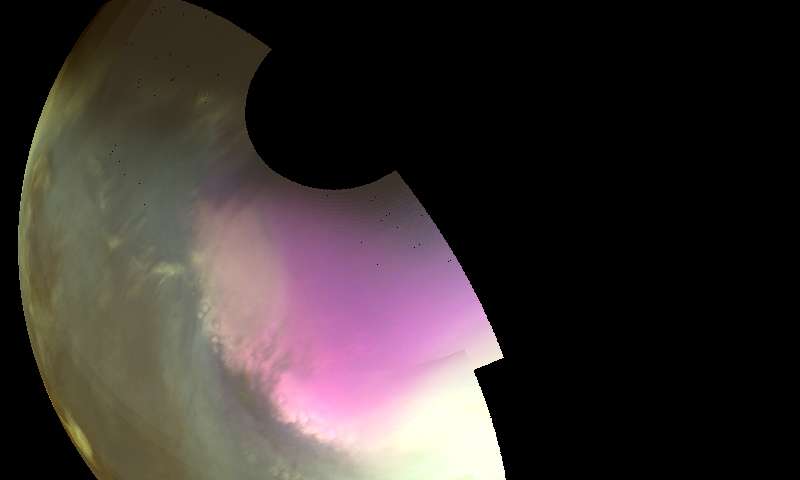 This ultraviolet image near Mars’ South Pole was taken by MAVEN on July 10 2016 and shows the atmosphere and surface during southern spring. Image via NASA/MAVEN/University of Colorado.

In the image above, of Mars’ South Pole, you can see the planet’s rocky surface. The brighter regions are due to clouds, dust and haze. The white region centered on the pole is frozen carbon dioxide (dry ice) on the surface. Pockets of ice are left inside craters as the polar cap recedes in the spring, giving its edge a rough appearance.

High concentrations of atmospheric ozone appear magenta in color, and the wavy edge of the enhanced ozone region highlights wind patterns around the pole.

Bottom line: Ultraviolet images of the planet Mars, showing what our eyes would see if we could see in ultraviolet, from the MAVEN mission.