It resembles a fingerprint, doesn’t it? But it’s really a galaxy, rotating. This image is from ESA’s Gaia space observatory. It shows the rotation of the Large Magellanic Cloud. 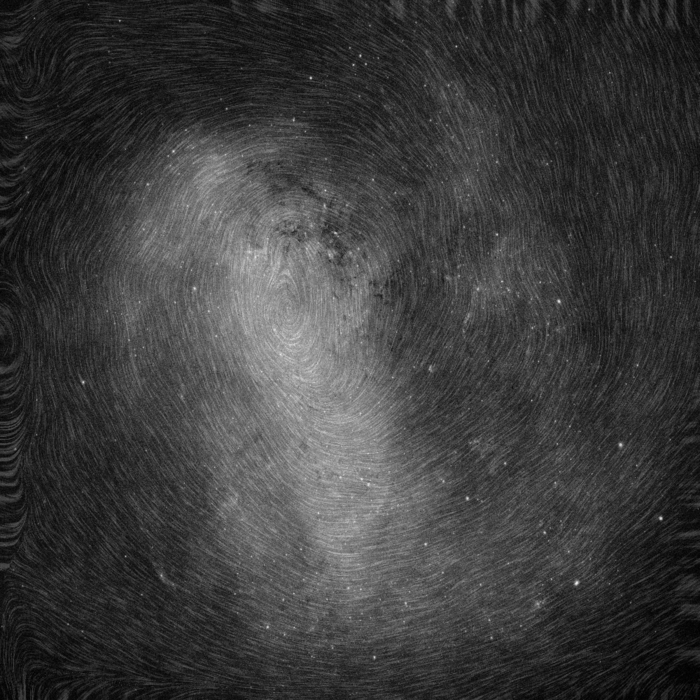 Last week, ESA’s Gaia mission released a much-awaited second batch of data, providing information on a phenomenal 1.7 billion stars in our Milky Way, which would make it the richest star catalog to date. The data also include information about stars beyond our own Milky Way galaxy. One example is illustrated in the image above, which focuses on one of the nearest galaxies to our Milky Way, the Large Magellanic Cloud, or LMC. This small galaxy, visible from Earth’s Southern Hemisphere, is considered a satellite galaxy to our Milky Way.

Gaia’s job is what’s called astrometry; that is, the space observatory scans the sky repeatedly, observing each of its targeted stars multiple times (ESA said an average of 70 times) over its five-year mission.

In this way, Gaia is gathering data about how stars move in our galaxy and nearby galaxies like the Large Magellanic Cloud. The image above combines the total density of stars detected by Gaia in the LMC. The information reveals the proper motion of stars – their velocities across our sky – which is represented as the texture of the image, and which gives it a fingerprint-like appearance. ESA said:

Measuring the proper motion of several million stars in the LMC, astronomers were able to see an imprint of the stars rotating clockwise around the center of the galaxy. The impression of motion is evoked by the swirling nature of the line texture.

Bottom line: Image from the ESA’s Gaia mission of the rotation of the Large Magellanic Cloud (LMC) looks like a giant fingerprint in space.