Atmospheric distortion caused the sun and moon to look flattened in this image of the May 9-10, 2013 annular solar eclipse. 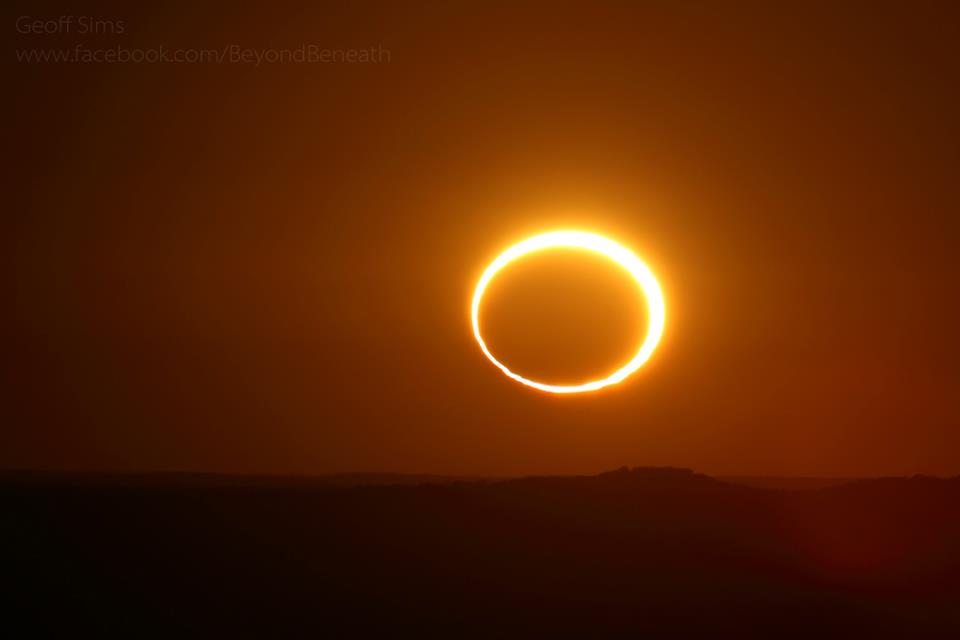 View larger | Annular solar eclipse – a “ring of fire” eclipse – by photographer Geoff Sims on May 10, 2013. Used with permission. Thank you, Geoff! Visit Geoff’s page on Facebook: Beyond the Skies, Beneath the Seas.

Photographer Geoffrey Sims captured this cool photo of the May 10, 2013 annular – ring of fire – eclipse about 200 kilometers (120 miles) from Newman in Western Australia.

As with all annular eclipses, the moon at the May 9-10 annular eclipse was directly in front of the sun. But, this time, the moon was too far away in its orbit around Earth to appear large enough in our sky to cover the sun completely. Instead, at mid-eclipse, an outer ring of the sun’s surface encircled the silhouetted new moon.

From Geoff’s location, the eclipse took place just after sunrise. The sun and moon had just risen and were low in the sky, where Geoff and others at his location saw them shining through an extra thickness of Earth’s atmosphere. The extra air caused the flattening, as shown in the image below:

Rays from the setting Sun (lower) are refracted by the atmosphere and make it appear higher in the sky. The lower limb is lifted more than the top, making its image oval. Image and caption via the great website Atmospheric Optics.

The horizon was perfectly clear, what an amazing sight seeing the squished sun in annular eclipse. Full sequence of photos to follow – have to lug 40 kg of gear down a mountain, walk it 1 km to my car, and drive back to pick up remotely deployed cameras elsewhere in the eclipse path.