Airglow over Acadia National Park earlier this month, as a tropical storm raged in the Atlantic. Can a storm cause airglow? An expert comments. 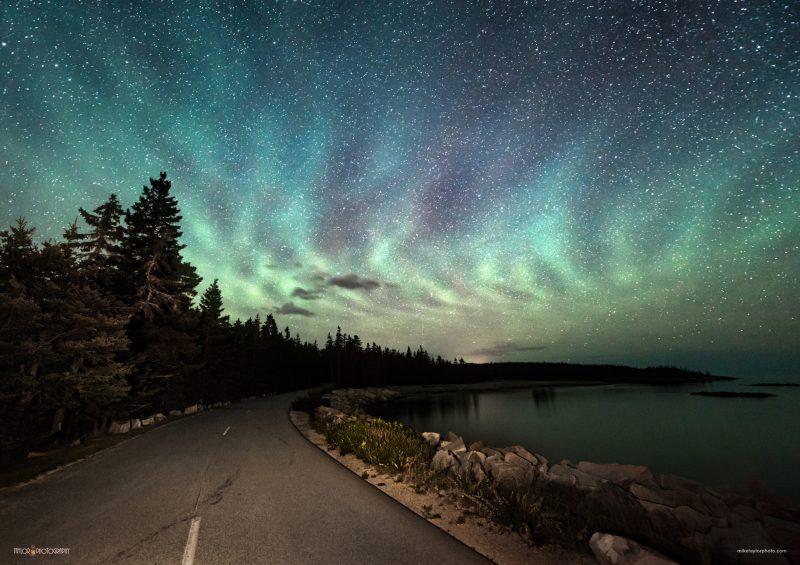 I’ve attached an image of the craziest airglow I’ve ever witnessed/photographed.

This is facing due east and was captured on the Schoodic Peninsula in Acadia National Park on September 2, 2016. An LED light panel was quickly used to light up the road. I was with three other photographers, and we all saw this with our unaided eyes.

Meteorologist Ryan Knapp, who works for the Mount Washington Observatory, commented that this phenomena was due in part to the storm Hermine: the center of the low was south of Cape Cod and was propagating the gravity waves northward.

Can storms – which occur in Earth’s troposphere, the lowest layer of our atmosphere, where all of our weather happens – really create airglow, an upper atmospheric phenomenon? We asked Les Cowley of the wonderful website Atmospheric Optics, and he said:

Green airglow occurs in a narrow layer 90-100 kilometers (about 55 to 62 miles) high. That is well above our tropospheric weather systems.

However, airflow over mountains and other disturbances produces atmospheric waves. These atmospheric gravity waves propagate upwards into the stratosphere, mesosphere and higher. The wave density and temperature fluctuations modify airglow formation to give the moving bands that echo the gravity waves’ structure.

Was Hermine responsible? It could be – but we do not know for sure. Banded airglow can be seen without obvious storms.