SpaceX’s Starlink satellite project will eventually place an initial 12,000 satellites in low-Earth orbit to provide worldwide internet access. This image is from the second batch of satellites launched November 11. 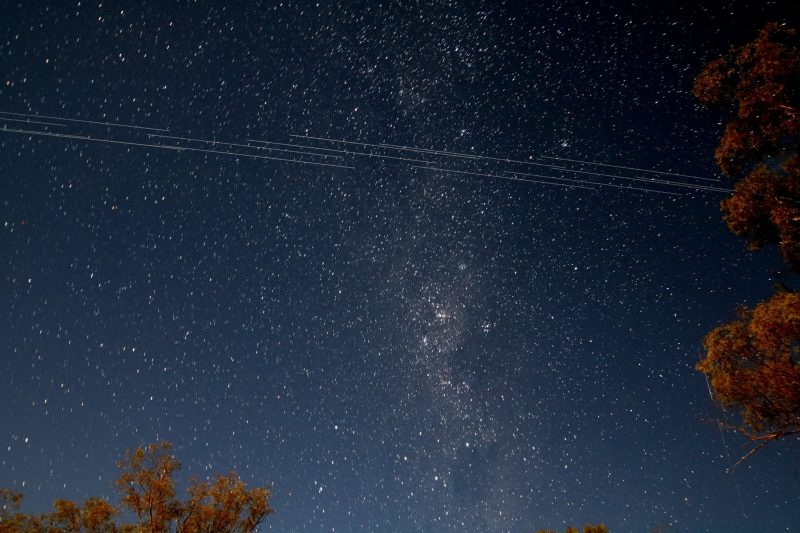 View at EarthSky Community Photos. | EarthSky friend Padraic Koen was in Arkaroola, South Australia, this morning, when a swarm of 25 SpaceX StarLink satellites passed over between 4:51 and 5:01 a.m. He created this composite of three 15-second shots – taken a few minutes apart – that captured 14 of the satellites. Thank you, Padraic!

Last week – on Monday, November 11, 2019 – a SpaceX Falcon 9 rocket launched 60 more Starlink satellites to Earth-orbit. According to Stephen Clark at SpaceFlightNow.com, the satellites traced paths across twilight skies around the world last week, and, even this morning (November 18) astrophotographers are still capturing them, as shown in this image from our friend Padraic Koen.

How long will we be able to see this batch of Starlink satellites? No one is exactly sure, but, even now, you’ll certainly need a dark sky. Clark explained:

… their brightness is expected to dim as the spacecraft – designed to beam broadband signals down to Earth – spread out and climb to higher altitudes.

The satellite-tracking website Heavens-Above.com updated its Starlink satellite page most recently on November 14. Go to its dynamic display of all objects from the recent Starlink launch.

SpaceX plans to launch thousands of Starlink satellites in the coming years, including hundreds more in 2020. The project will eventually place an initial 12,000 satellites in low-Earth orbit to provide worldwide internet access. Each satellite is the size of a table and includes a reflective solar panel for power.