Has a remnant of Comet ISON survived the close brush with the sun? 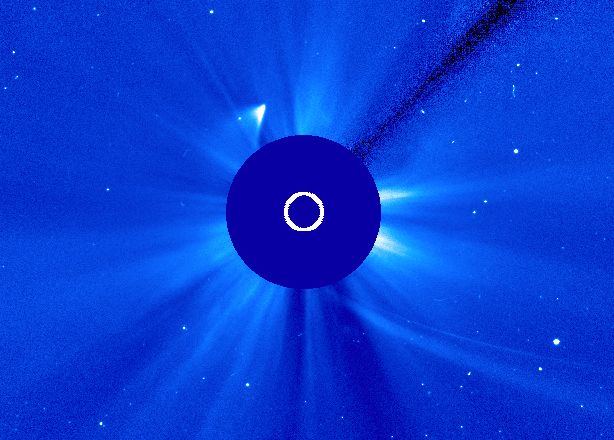 After coming closest to the sun on Thursday, November 28, scientists at first were saying that the comet has disintegrated. Then ISON suddenly began brightening again. And by Thursday evening, at least one scientist – Karl Battams of NASA – wrote on Twitter:

Alright we’re calling it, and you heard it here first: We believe some small part of #ISON’s nucleus has SURVIVED perihelion.

If a only small chunk of ISON’s nucleus survived, as seems possible, the comet will not become a bright object in our night sky. But this comet has confounded our expectations at every turn. So who knows?

Read more: Comet ISON is down, but not out?

EarthSky blogger Shireen Gonzaga contributed the following movie of ISON as the comet rounded the sun. In it, you can clearly see that ISON appears fainter just after it emerges from perihelion – closest point to the sun – and then brightens again as it pulls away from the sun. Thank you, Shireen!

The LASCO instrument (Large Angle and Spectrometric Coronagraph) onboard the SOHO (Solar and Heliospheric Observatory) spacecraft acquired the images for this movie. The circular mask at the center blocks the sun so that faint features, otherwise washed out by the bright glare of the sun, can be observed.

SOHO has three different cameras, with different fields-of-view, recording white-light images of the sun. The image above is from the C2 camera, which a field of view from 2 to 6 times the sun’s radius.