Video of closest comet in 246 years

It’s small, but, because it’s so close to us, it appears to be moving very fast across our sky. Image and video by EarthSky community member Greg Hogan.

Greg Hogan sent in this video of the little comet C/2016 BA14, which he acquired on March 21, 2016, one day before the comet swept closest to Earth. This comet made the closest sweep past Earth of any known comet in 246 years! It passed about 9 lunar distances from us, moving at 31,345 miles per hour (50,445 km/h) through space.

I was able to grab some shots and make a video animation of Comet C/2016 BA14, showing how fast it is moving across the sky in just a 20-minute window.

I did a 15-second exposure for 85 shots and compiled them all together.

These were taken from Kathleen, Georgia, at around 10:15 p.m ET using a Celestron 6N and a Canon 7D.

Comet C/2016 BA14 may be a fragment of another comet – labeled 252P/LINEAR – which is in a very similar orbit and which passed closest to us on March 21. 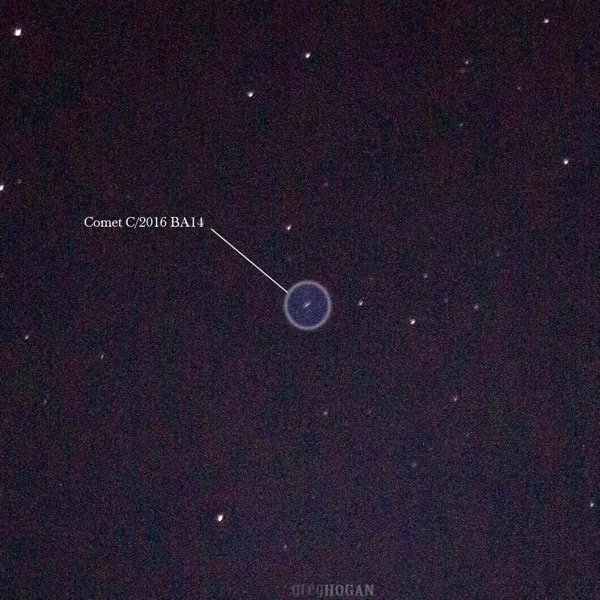 Comet C/2016 BA14, as captured on March 21, 2016 by Greg Hogan in Kathleen, Georgia. Greg wrote: “What’s cool about this still image is you can still see the movement of it in just a short 15-second exposure, compared to all the other stars that are nice and round. This little comet is moving so very fast!”

Bottom line: Video by Greg Hogan of Kathleen, Georgia, showing the swift moment across the sky of Comet C/2016 BA14, closest comet in 246 years and third-closest known comet in history. It swept 9 lunar distances from Earth on March 22, 2016.