Satellite image of the area around Paradise, California, on the morning of November 8 shows the Camp Fire when it was only 4 hours old, yet had already burned halfway through the city. 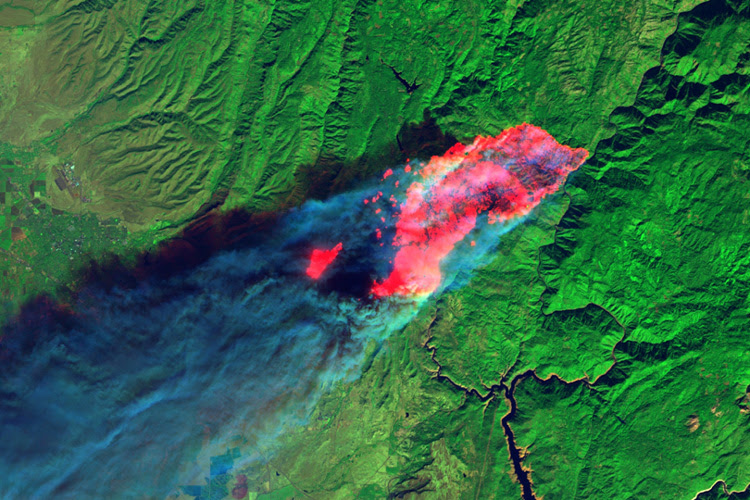 Short-wave infrared (red) captured by Landsat 8 satellite shows the full extent of the actively burning area of the Camp Fire 4 hours after it started on November 8, 2018. The red patches are fires that leapfrogged in front of the primary burn front, which was growing at a rate of approximately 3 miles (5 km) per hour. The northeastern, upwind edge of the burn lies beneath and parallel to three high-tension power lines running along Highway 70, about a mile and a half northeast of a town called Pulga and a site identified as a possible origin of the fire. Earth Engine image by Jeff Chambers.

On Thursday (November 15, 2018), University of California Berkeley released a series of satellite images of the area around Paradise, California, that captured the Camp Fire on November 8, 2018, when the fire was only four hours old, yet had already burned halfway through the city.

Chambers used the satellite data to clock the fire’s speed at about 3 miles (5 km) per hour during its first four hours, driven in part by flying embers that caused the fire to leapfrog up to 2.5 miles (4 km) ahead of the advancing fire front.

As of Thursday, the Camp Fire had scorched 140,000 acres, left at least 56 people dead and destroyed more than 8,700 residences, making it the most destructive fire in California history. It is only 40 percent contained.

Bottom line: Satellite image of the area around Paradise, California, on the morning of November 8, 2018 shows the Camp Fire when it was only 4 hours old, yet had already burned halfway through the city.