The zombie star that wouldn’t die

Supernovae like this one – designated iPTF14hls – usually remain bright for about 100 days. This one stayed bright for 600 days. Then, astronomers found a 1954 explosion in the same spot in the sky. 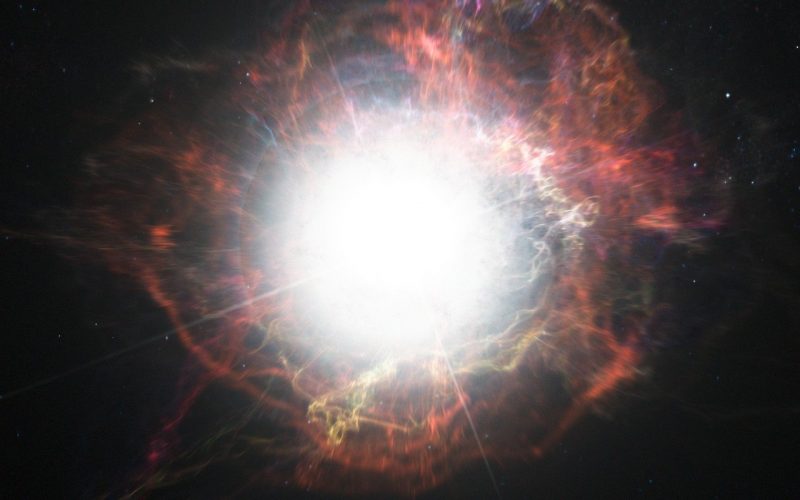 Artist’s concept of a supernova explosion via ESO/ M. Kornmesser.

Powerful star explosions known as supernovae usually mark the death of stars. But astronomers today (November 8, 2017) announced a supernova that exploded multiple times over a period of more than 50 years. It might be the explosion of a star more massive than any seen to explode before. It might be an explosion caused by the meeting of matter and antimatter in a massive star’s core. Whatever the true explanation, the astronomers said the finding, which is published in the peer-reviewed journal Nature:

… completely confounds existing knowledge of a star’s end of life.

The Palomar Transient Factory – an astronomical survey led by Caltech designed to find transient and variable sources such as variable stars, supernovae, asteroids and comets – noticed this supernova in September of 2014. The supernova was designated iPTF14hls. Analysis of its light indicated it was what’s called a type II-P supernova. As expected, the supernova began to fade again.

Everything about the discovery seemed normal … until a few months later.

That’s when astronomers with the Las Cumbres Observatory – a worldwide network of robotic telescopes, directed out of Goleta, California – noticed that iPTF14hls was growing brighter again. Their statement explained:

A normal supernova rises to peak brightness and fades over approximately 100 days. Supernova iPTF14hls, on the other hand, grew brighter and dimmer at least five times over two years.

Then astronomers went back and looked at archival data, showing this part of the sky. They were astonished to find evidence of an explosion in 1954 at the exact same location on the sky’s dome. Apparently, iPTF14hls had somehow survived an earlier explosion and exploded again in 2014.

An image taken by the Palomar Observatory Sky Survey revealed a possible explosion in the year 1954 at the location of iPTF14hls (left), not seen in a later image taken in 1993 (right). Supernovae are known to explode only once, shine for a few months and then fade, but iPTF14hls experienced at least 2 explosions, 60 years apart. Image adapted from Arcavi et al. 2017, Nature, via POSS/ DSS/ LCO/ S. Wilkinson/ CarnegieScience.edu.

Astronomers are now saying that iPTF14hls might be an explosion of a star more massive than any seen to explode before. The study – led by astronomer Iair Arcavi, of Las Cumbres Observatory and the University of California, Santa Barbara – calculated that the star that exploded was at least 50 times more massive than our sun and probably much larger. The size of this explosion could be the reason that our conventional understanding of the death of stars failed to explain this event, according to these astronomers. Iair Arcavi commented:

This supernova breaks everything we thought we knew about how [supernovae] work.

Supernova iPTF14hls may be the first example of a ‘pulsational pair instability supernova.’ This theory holds that massive stars become so hot in their cores that energy is converted into matter and antimatter. This would cause an explosion that blows off the outer layers of the star and leaves the core intact; this process can repeat over decades before the large final explosion and collapse to a black hole.

Andy Howell, leader of the LCO supernova group and a coauthor of the study, said:

These explosions were only expected to be seen in the early universe and should be extinct today. This is like finding a dinosaur still alive today. If you found one, you would question whether it truly was a dinosaur.

But, the astronomers warn, this theory can’t explain all the observations and might not, after all, be the answer to the riddle of this star. Instead, they say, this supernova might be something completely new.

That’s why the supernova group at Las Cumbres Observatory is still monitoring iPTF14hls, which remains bright three years after it was discovered. 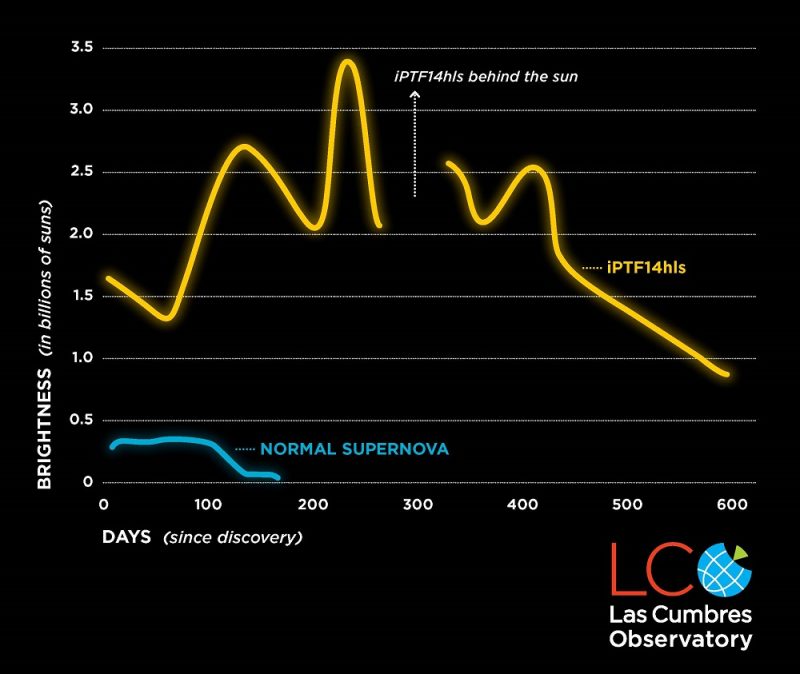 Bottom line: Supernovae iPTF14hls – discovered in 2014 – stayed bright for 600 days. Then, astronomers found a 1954 explosion in the same spot in the sky.