Do Mars dust storms cause the mysterious zodiacal light?

The zodiacal light is a strange pyramid of light that extends from the eastern or western horizon, before dawn or as true darkness falls. It was known to stem from dust moving in the plane of our solar system. The Juno spacecraft has found that Mars might be the source of the dust.

From Northern Hemisphere locations, in the weeks and months around the equinox, you can look west each evening after true darkness falls toward a mysterious hazy pyramid of light. It’s called the zodiacal light, and you can see it from the Southern Hemisphere, too; from there, at this time of year, you’d look east before dawn. This strange column of hazy light can be very bright and noticeable in dark skies, especially from latitudes closer to the equator, such as those in the southern U.S. Farther north or south, the light appears fainter, but it’s still traceable against a dark sky background. This mysterious light has long been known as sunlight reflecting off dust grains that move in the plane of our solar system. Asteroids and comets were thought to be its source. But on March 9, 2021, scientists working with the Juno spacecraft – now orbiting Jupiter – announced a serendipitous discovery by Juno suggesting Mars dust storms as the source of the zodiacal light.

The scientists said in a statement that an instrument aboard Juno revealed dust particles slamming into the spacecraft during its journey from Earth to Jupiter, following its 2011 launch from Earth. The impacts let them track the distribution of the dust for the first time, and they found it lies in a nearly circular band around the sun. The inner edge of this dust cloud ends at Earth, these scientists said, because Earth’s gravity sucks up all the dust that gets near it. The outer edge of the dust band goes to about 2 astronomical units, or AU (that is, 2 Earth-to-sun units of distance). The dust band ends just beyond Mars. This fact gave scientists a clue that the dust might stem from the planet-wide dust storms that frequently engulf Mars’ surface. John Leif Jørgensen of the Technical University of Denmark, who designed the instrumentation that let Juno detect this dust, said in a statement:

… the natural thought is that Mars is a source of this dust.

These scientists first published their work online in late 2020, in the peer-reviewed Journal of Geophysical Research: Planets. Jørgensen commented:

I never thought we’d be looking for interplanetary dust. 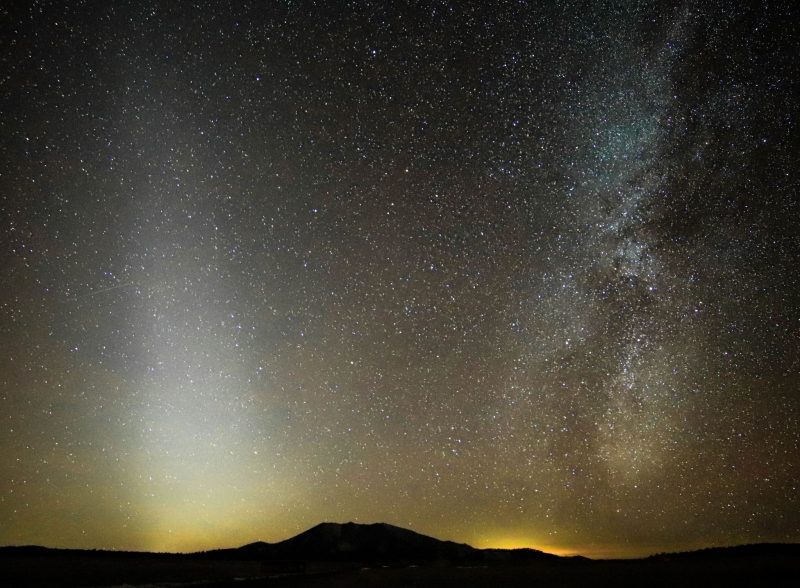 View at EarthSky Community Photos. | Caroline Haldeman captured this amazing image from Flagstaff, Arizona, on January 11, 2021. The hazy pyramid on the left is the zodiacal light; it’s sunlight reflecting off dust grains, possibly from Mars! The hazy arc on the right isn’t haze at all. It’s the combined light of billions of stars: the starry band of our Milky Way galaxy. By the way, this image is part of a video Caroline made, which you can see here. Thanks, Caroline! 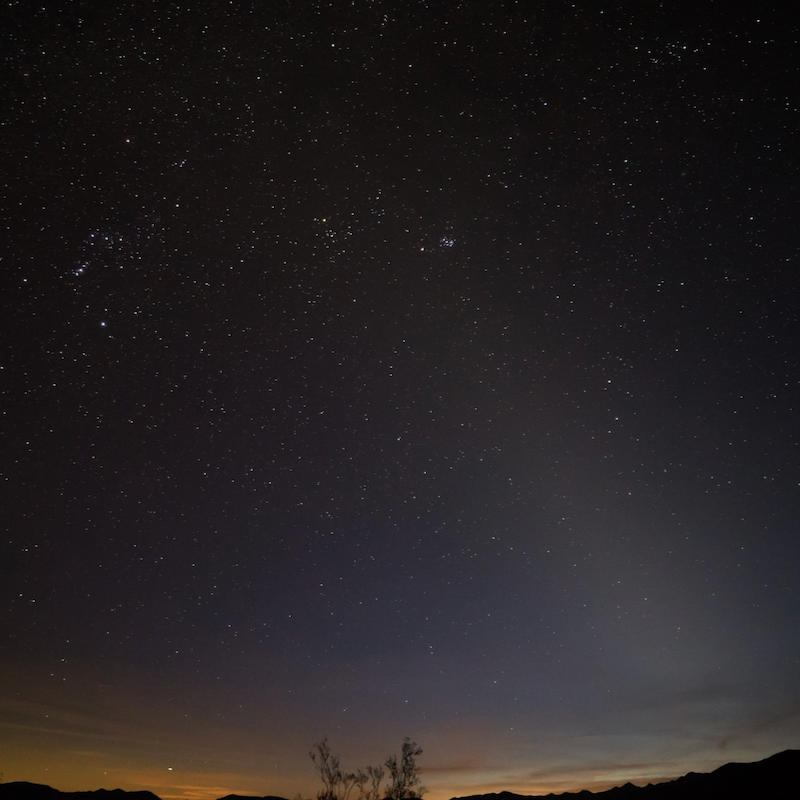 View at EarthSky Community Photos. | It so happens you can see Mars and the zodiacal light in the same part or the sky now, if you’re in the Northern Hemisphere. Christin Nelson caught this image of the light at Deadman Pass Road, Death Valley, California, on March 5, 2021. See it? It’s the faint cone of light on the right. Christin wrote: “I went out to day camp near Death Valley and got lucky enough to catch the zodiacal light after sunset. After getting home and reading EarthSky to see the conjunction of Mars and the Pleiades, I decided to double check my photos and wouldn’t you know it, it’s in there too. The zodiacal light points right to it. :)” Thank you, Christin!

Jørgensen and Jack Connerney, another Juno mission scientist, noticed that the majority of dust impacts were recorded between Earth and the asteroid belt, with gaps in the distribution related to the influence of Jupiter’s gravity. Their statement said:

… this was a radical revelation. Before now, scientists have been unable to measure the distribution of these dust particles in space. Dedicated dust detectors have had limited collection areas and thus limited sensitivity to a sparse population of dust. They mostly count the more abundant and much smaller dust particles from interstellar space. In comparison, Juno’s expansive solar panels have 1,000 times more collection area than most dust detectors.

These scientists said that the influence of Jupiter’s gravity acts as a barrier, preventing dust particles from crossing from the inner solar system into deep space. This same phenomenon, known as orbital resonance, also works the other way, where it blocks dust originating in deep space from passing into the inner solar system.

Why are these scientists confident that Mars’ dust is the source of the zodiacal light? Their statement explained:

The researchers developed a computer model to predict the light reflected by the dust cloud, dispersed by gravitational interaction with Jupiter that scatters the dust into a thicker disk. The scattering depends only on two quantities: the dust inclination to the ecliptic and its orbital eccentricity. When the researchers plugged in the orbital elements of Mars, the distribution accurately predicted the tell-tale signature of the variation of zodiacal light near the ecliptic.

That is, in my view, a confirmation that we know exactly how these particles are orbiting in our solar system and where they originate. 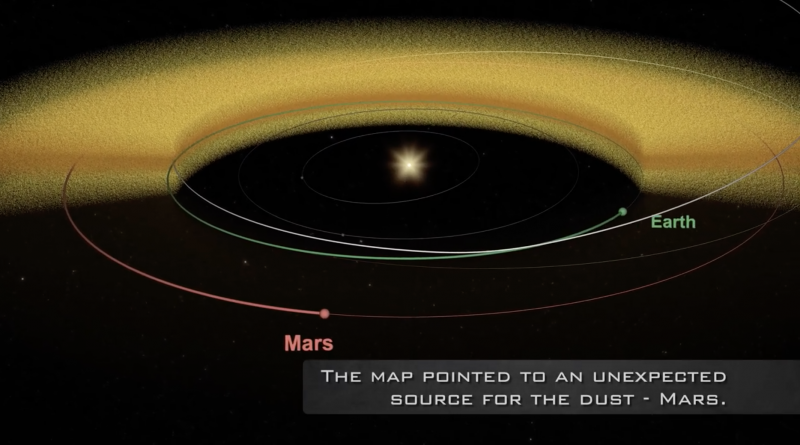 Still image from the video at top, showing how the distribution of dust grains in our solar system – the source of the mysterious zodiacal light – matches the orbit of Mars. Image via NASA.

The researchers cautioned, though, that they can’t yet explain how the dust could have escaped the grip of Martian gravity. They said they hope other scientists will help them.

The researchers note that finding the true distribution and density of dust particles in the solar system will help engineers design spacecraft materials that can better withstand dust impacts.

In the meantime, we on Earth have yet another reason to enjoy standing under a dark sky on a clear March evening, looking westward. While contemplating the beauty of the zodiacal light, we can also have fun imagining its source as the red dust that blows in great dust storms across the surface of Mars!

Bottom line: The zodiacal light is a strange pyramid of light that extends from the eastern or western horizon, before dawn or as true darkness falls. It is known to stem from dust moving in the plane of our solar system. The Juno spacecraft has found that Mars might be the source of the dust. CORRECTION ADDED ON MARCH 11, 2021: The original article stated that Mars’ orbit is more circular than that of Earth. This is incorrect. Earth’s orbit is more circular than that of Mars. Our thanks to careful reader James Machin for pointing out this error.

Source: Distribution of Interplanetary Dust Detected by the Juno Spacecraft and Its Contribution to the Zodiacal Light