Will a nearby supernova harm life on Earth in 2012? Nah.

A supernova in our galaxy would have to be within 50 light-years to harm life on Earth. Likelihood that will happen? Zero, astronomers say.

NASA has been doing a great series on erroneous doomsday scenarios for 2012. A lot of doomsday scenarios involve space and astronomy because, let’s face it, when thinking about destroying all life on Earth, one generally thinks in cosmic proportions. NASA’s latest explanation of an erroneous doomsday scenario for 2012 involves a supernova – or exploding star – erupting nearby and harming life on Earth. Could this happen? Astronomers and space scientists say no. Given the incredible amounts of energy in a supernova explosion – as much as the sun creates during its entire lifetime – it’s easy to see why some would imagine it. However, NASA says:

Given the vastness of space and the long times between supernovae, astronomers can say with certainty that there is no threatening star close enough to hurt Earth. 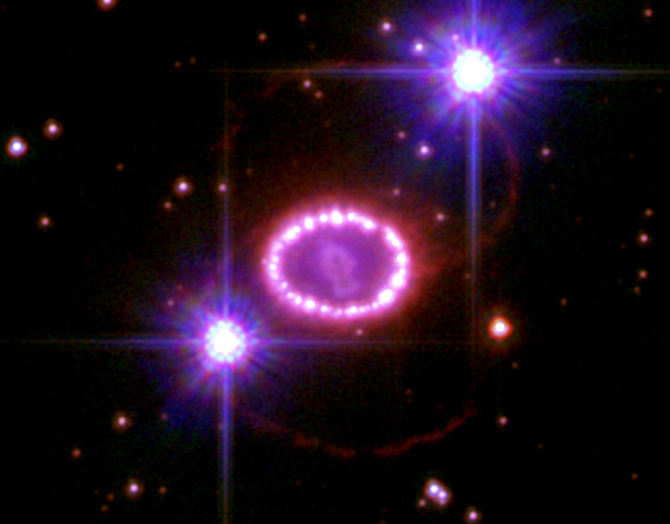 Supernova 1987A was the closest exploding star seen in modern times. How far away was it? 160,000 light-years. Astronomers combined images taken by NASA’s Hubble Space Telescope to make this composite of the blast’s expanding debris. Credit: NASA / ESA / P. Challis and R. Kirshner (Harvard-Smithsonian Center for Astrophysics).

If a supernova were to erupt anywhere in our galaxy, it would be a big deal! Astronomers would rush to their telescopes to observe it. The closest one in modern times was Supernova 1987A. It happened in the Large Magellanic Cloud, a dwarf galaxy that orbits our own Milky Way, some 160,000 light-years away. That’s in contrast to the nearest star, little Proxima Centauri, at about 4 light-years away. Or it’s in contrast to mighty Deneb in the constellation Cygnus, a bright star, one of the most distant stars we can see with the eye alone – located somewhere between 1,400 and 7,000 light-years away. So, you see, distances in space are very vast! Plus supernovae are very rare. Here’s what NASA says:

Astronomers estimate that, on average, about one or two supernovae explodes each century in our galaxy. But for Earth’s ozone layer to experience damage from a supernova, the blast must occur less than 50 light-years away. All of the nearby stars capable of going supernova are much farther than this.

Wait, you say. What about Betelgeuse in the constellation Orion? Betelgeuse is the one star relatively near Earth that will surely explode someday. Betelgeuse will become a supernova. But this event is just as likely to happen thousands or millions of years from now as tomorrow. What’s more, when Betelgeuse does blow up, our planet Earth is too far away for life to be harmed. Remember, a supernova would have to be within 50 light-years to harm us. How far away is Betelgeuse? It lies some 430 light-years from Earth.

Would a planet near a supernova explosion – say, within 50 light-years – experience problems? Absolutely. Any planet with life on it near a star that goes supernova would suffer. X- and gamma-ray radiation from the supernova could damage the planet’s ozone layer (assuming it had one), exposing its inhabitants to harmful ultraviolet light from its parent star. Here’s what NASA says:

The less ozone there is, the more UV light reaches the surface. At some wavelengths, just a 10 percent increase in ground-level UV can be lethal to some organisms, including phytoplankton near the ocean surface. Because these organisms form the basis of oxygen production on Earth and the marine food chain, any significant disruption to them could cascade into a planet-wide problem.

But, again, there’s no potential supernova near enough to us for any of this to happen.

When a massive star collapses on itself — or, less frequently, when two compact neutron stars collide — the result is the birth of a black hole. As matter falls toward a nascent black hole, some of it becomes accelerated into a particle jet so powerful that it can drill its way completely through the star before the star’s outermost layers even have begun to collapse. If one of the jets happens to be directed toward Earth, orbiting satellites detect a burst of highly energetic gamma rays somewhere in the sky. These bursts occur almost daily and are so powerful that they can be seen across billions of light-years.

A gamma-ray burst could affect Earth in much the same way as a supernova – and at much greater distance – but only if its jet is directly pointed our way. Astronomers estimate that a gamma-ray burst could affect Earth from up to 10,000 light-years away. What’s the closest gamma ray burst so far? So far, the closest burst on record, known as GRB 031203, was 1.3 billion light-years away.

Bottom line: Astronomers can say with certainty that there is no potential supernova close enough to us to harm life on Earth. That particular 2012 doomsday scenario has to join magnetic pole reversals and killer solar flares as being … well, as twenty-somethings would say, “meh.” (meh definition here: warning profanity on page)