Why Saturn has auroras

After a three-year observing campaign of Saturn using the Hubble Space Telescope, scientists have confirmed that auroras on Earth and Saturn have a common origin. 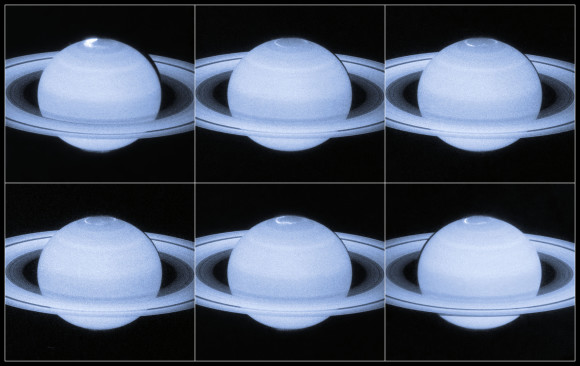 View larger. | Astronomers using the Hubble Space Telescope captured these new ultraviolet images of the aurora at Saturn’s north pole. The images capture moments when Saturn’s magnetic field is affected by bursts of particles streaming out from the sun, providing evidence that the auroral displays are often caused by the dramatic collapse of the planet’s magnetic tail. Image via NASA/ESA and AGU

Researchers have confirmed that Saturn’s auroral displays stem from the same cause as auroras on Earth. They are caused by the dramatic collapse of the planet’s magnetic tail. Just like comets, planets such as Saturn and the Earth have a tail – known as the magnetotail – that is made up of electrified gas from the sun. This tail flows out in the planet’s wake. When a particularly strong burst of particles from the sun hits Saturn, it can cause the magnetotail to collapse, with the ensuing disturbance of the planet’s magnetic field resulting in spectacular auroral displays. A very similar process happens here on Earth.

Astronomers using the Hubble Space Telescope between April and May of 2013 to capture the images above of the dancing auroral lights at Saturn’s north pole. These ultraviolet images show when Saturn’s magnetic field is affected by bursts of particles streaming out from the sun, providing evidence that the auroral displays are often caused by the dramatic collapse of the planet’s magnetic tail.

Scientists observed this process happening on Saturn firsthand as part of a three-year-long Hubble observing campaign. Their findings have been accepted for publication in Geophysical Research Letters, a journal of the America Geophysical Union.

Due to the composition of Saturn’s atmosphere, its auroras shine brightly in the ultraviolet range of the electromagnetic spectrum.

The team caught Saturn during a very dynamic light show. Some of the bursts of light seen shooting around Saturn’s polar regions travelled at over three times faster than the speed of the gas giant’s rotation. Jonathan Nichols, a lecturer and research fellow in the University of Leicester’s Department of Physics and Astronomy in the United Kingdom, who led the Hubble observations, said:

These images are spectacular and dynamic, because the auroras are jumping around so quickly. The key difference about this work is that it is the first time the Hubble has been able to see the northern auroras so clearly.

The particular pattern of auroras that we saw relates to the collapsing of the magnetotail. We have always suspected this was what also happens on Saturn. This evidence really strengthens the argument.

“Our observations show a burst of auroras that are moving very, very quickly across the polar region of the planet. We can see that the magnetotail is undergoing huge turmoil and reconfiguration, caused by buffering from solar wind.

It’s the smoking gun that shows us that the tail is collapsing. 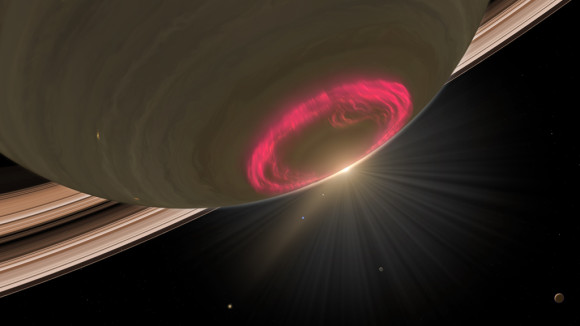 A painting of Saturn’s aurora via NASA

Bottom line: After a three-year observing campaign of Saturn using the Hubble Space Telescope, scientists have confirmed that auroras on Earth and Saturn have a common origin.