What lives between the stars?

The interstellar medium is the stuff between the stars. Made up mostly of hydrogen and helium gas, it contains all the material needed to make stars and planets. It is shaped by stellar winds, dying stars, galactic magnetic fields, and supernova explosions.

The space between the stars is not empty.

Sure, it’s much emptier than anything here on Earth. But nearly one-sixth of our galaxy’s mass lives here.

The interstellar medium, or ISM, contains the ingredients for making planets, asteroids, and stars. Though tenuous – there is only about one atom in every cubic centimeter – there is enough material here to build entire galaxies.

The ISM is 99% gas. About three-quarters of that gas is hydrogen, the fuel that powers stars for most of their lives. One quarter is helium. Almost all that hydrogen and helium was formed in the first three minutes after the Big Bang. Only a couple percent of the gas is every other element on the periodic table. Carbon, oxygen, magnesium, iron, uranium – all of it formed in the cores of long-dead stars. 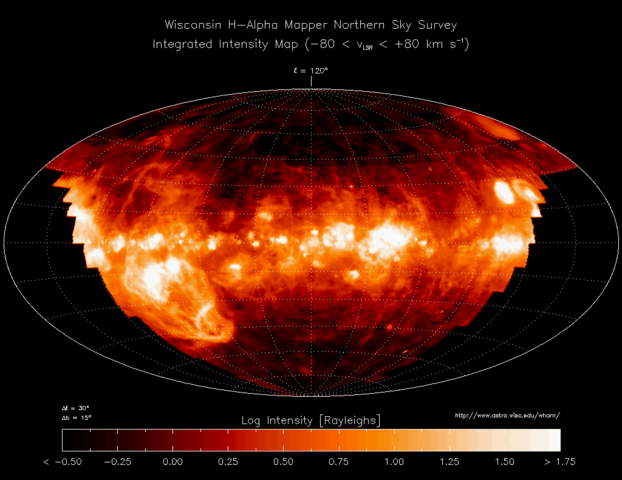 The other 1% of the ISM is “interstellar dust”. The dust consists of ices, carbon compounds, and silicate grains formed around red giant stars. Like polluting factories, these stars blow “atomic soot” – carbon, oxygen, silicon – into space, carried aloft by strong stellar winds. Escaping the warm environments of these stars, the soot collects into clouds. There, shielded from the ionizing radiation that bathes the galaxy, the atoms can collect and build complex chains. In these clouds, astronomers have found amino acids – the building blocks of proteins. The stuff of life is everywhere!

The ISM creates stars, and the stars give back to the ISM. This is a place of cosmic recycling on a galactic scale! 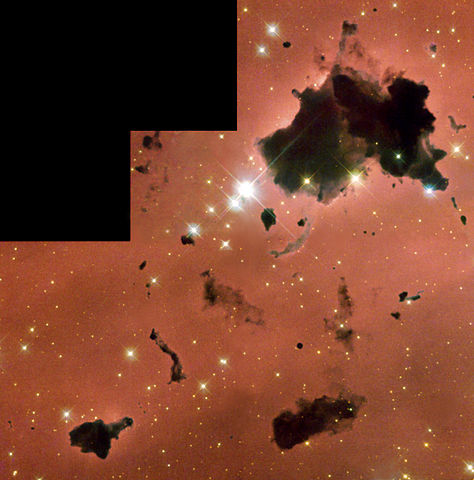 The cycle starts in cold, dark clouds. Tens of light-years across, these clouds house enormous quantities of molecular hydrogen. All it takes is a nudge from outside – a passing star cluster, a nearby supernova, the sweep of a galactic spiral arm – and the cloud becomes unstable. Pockets of ever-increasing density flourish, driven by the cloud’s own gravity. From these dark cocoons, stars are born. Upon ignition, they blow away the remaining material and light up the cloud. The Orion Nebula, the Lagoon Nebula, and the Witch Head Nebula are all clouds of gas and dust lit up by nearby young stars.

At the other extreme is the ionized gas. Shocks from powerful supernova explosions heat some of the gas to millions of degrees.  There is enough energy to rip electrons from their atoms.  The gas responds by glowing with x-ray radiation. Some of this gas is even blown free of the galaxy, into intergalactic space. 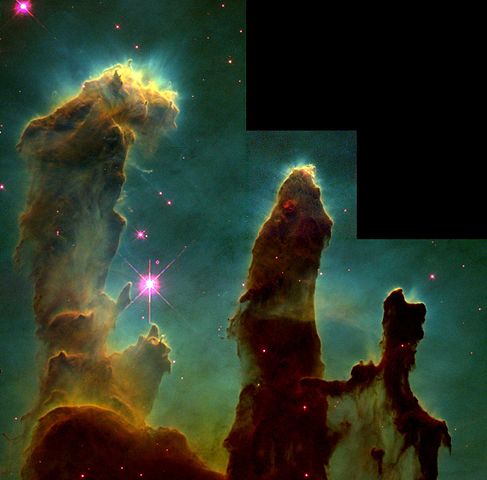 The Pillars of Creation in the Eagle Nebula, 7000 light-years away. In this Hubble Space Telescope image, dark molecular clouds, several light-years long, are being sculpted by the winds from nearby young stars. The green and blue light comes from hydrogen and oxygen gas, respectively, that surround the clouds. Credit: NASA, Jeff Hester, and Paul Scowen (Arizona State University)

Between supernova shocks, young stellar winds, galactic magnetic fields, and turbulent motion, the ISM has a rich and complex structure. Filaments of gas, dense pockets of hydrogen, and expanding voids connect the network of material threading the galaxy.

Most of this web is invisible.  To map the ISM, astronomers must turn to other parts of the electromagnetic spectrum.  The cold, dark gas emits radio waves.  Warm dust shows up in infrared telescopes. The superheated plasmas glow with x-rays. By putting together observations at all these wavelengths, we can draw a picture of what the interstellar medium around the sun looks like. 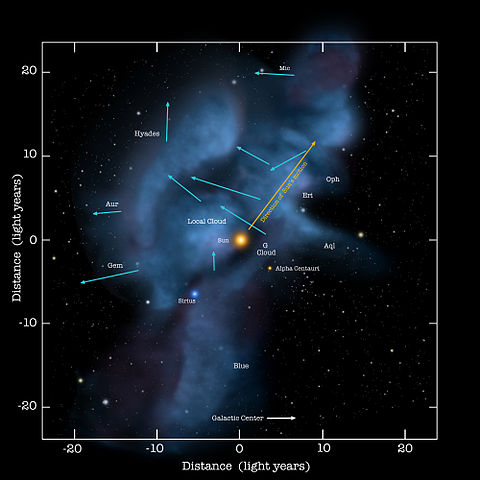 The interstellar medium around the sun. We are passing through tenuous clouds of gas and dust. The gas is as sparse as a handful of air stretched over a column hundreds of light-years long. Credit: NASA/Goddard/Adler/U. Chicago/Wesleyan

We are currently drifting near the edge of a cloud of gas 60 light-years across: the Local Interstellar Cloud. The cloud itself is being blown away by a nearby grouping of young stars: the Scorpius-Centaurus Association. About 400 light-years away, it is the closest region of massive star formation to Earth. Supernovae in the Association have evacuated the space around the young stars to form a bubble in the ISM. Adjacent to this void, our sun and the Local Cloud sit in another bubble: the Local Bubble. Our Local Bubble has extremely low densities—only about one particle for every 10 cubic centimeters. About 300 light-years across, the Local Bubble is also the result of a supernova explosion near Earth sometime in the last 10–20 million years.

The ISM reminds us that the galaxy is far more complex than appears at first glance. Without advances in technology, much of the universe would remain invisible to us. But even our humble eyes can catch glimpses of the hidden universe. On a dark night, where you can see the band of the Milky Way arching overhead, look closely. There are pockets where the light is missing. You are seeing the dark clouds of the ISM, blocking the light from more distant stars! These are the sites of star formation, future stellar nurseries. And you don’t need a telescope to see them. Just a dark sky and a willingness to look up.

A panoramic view of the Milky Way Galaxy surrounding Earth. The dark bands, visible under dark skies, are the silhouettes of dark dust clouds floating through the galaxy.

Bottom line: The interstellar medium is the stuff between the stars.  Made up mostly of hydrogen and helium gas – plus trace amounts of ices, silicate grains, and all the other elements – it contains all the material needed to make stars and planets.  It is shaped by stellar winds, dying stars, galactic magnetic fields, and supernova explosions.  The clumps, filaments, and voids can be seen by astronomers using radio, infrared, and x-ray telescopes.