We need dark energy to explain why gravity seems to be driving galaxies in our universe apart instead of pulling them together. 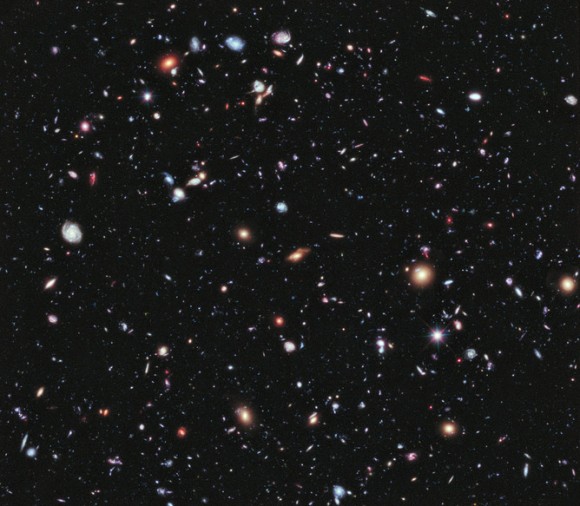 How do we think about something we can’t see and don’t experience in our everyday lives, but seems to be pushing our universe apart ever faster? Image credit: NASA, ESA, G. Illingworth, D. Magee, and P. Oesch (University of California, Santa Cruz), R. Bouwens (Leiden University), and the HUDF09 Team, CC BY

The nature of dark energy is one of the most important unsolved problems in all of science. But what, exactly, is dark energy, and why do we even believe that it exists? 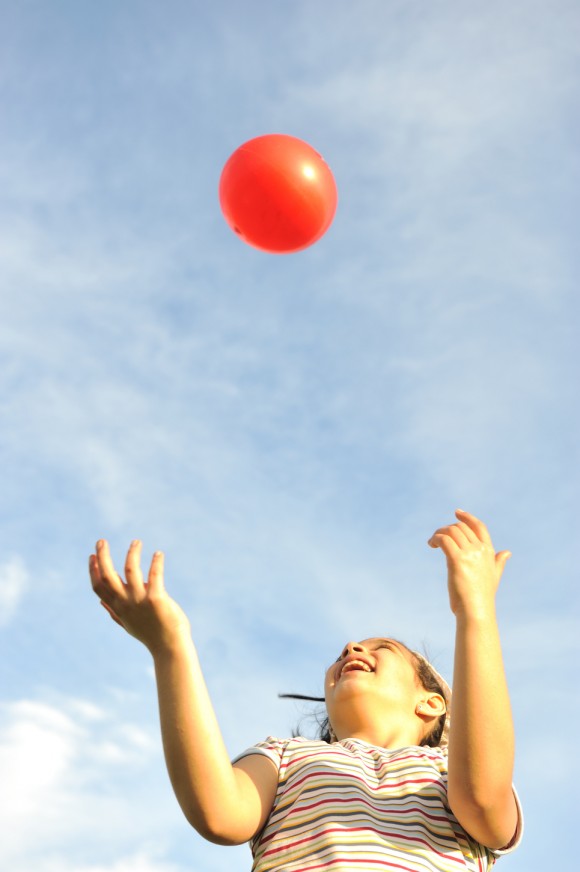 What goes up must come down… right? Ball image via www.shutterstock.com

Step back a minute and consider a more familiar experience: what happens when you toss a ball straight up into the air? It gradually slows down as gravity tugs on it, finally stopping in mid-air and falling back to the ground. Of course, if you threw the ball hard enough (about 25,000 miles per hour) it would actually escape from the Earth entirely and shoot into space, never to return. But even in that case, gravity would continue to pull feebly on the ball, slowing its speed as it escaped the clutches of the Earth.

But now imagine something completely different. Suppose that you tossed a ball into the air, and instead of being attracted back to the ground, the ball was repelled by the Earth and blasted faster and faster into the sky. This would be an astonishing event, but it’s exactly what astronomers have observed happening to the entire universe!

Scientists have known for almost a century that the universe is expanding, with all of the galaxies flying apart from each other. And until recently, scientists believed that there were only two possible options for the universe in the future. It could expand forever (like the ball that you tossed upward at 25,000 miles an hour), but with the expansion slowing down as gravity pulled all of the galaxies toward each other. Or gravity might win out in the end and bring the expansion of the universe to a halt, finally collapsing it back down in a “big crunch,” just like your ball plunging back to the ground. 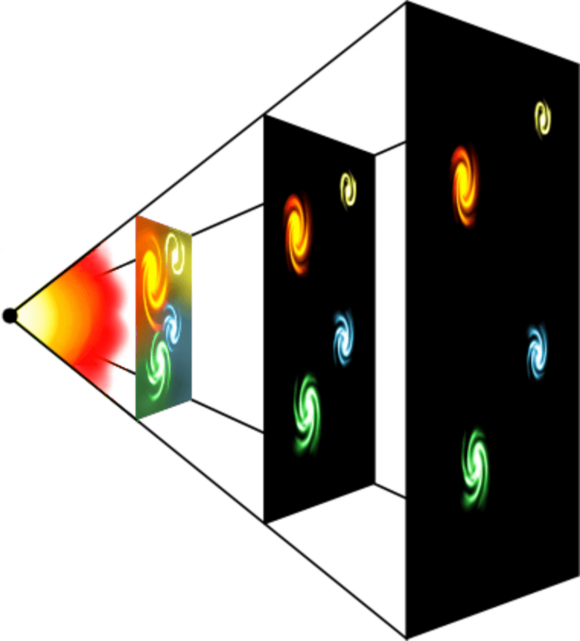 So imagine scientists’ surprise when two different teams of astronomers discovered, back in 1998, that neither of these behaviors was correct. These astronomers were measuring how fast the universe was expanding when it was much younger than today. But how could they do this without building a time machine?

Luckily, a telescope is a time machine. When you look up at the stars at night, you aren’t seeing what they look like today – you’re seeing light that left the stars a long time ago – often many hundreds of years. By looking at distant supernovae, which are tremendously bright exploding stars, astronomers can look back hundreds of millions of years. They can then measure the expansion rate back then by comparing the distance to these far-off supernovae with the speed at which they are flying away from us. And by comparing how fast the universe was expanding hundreds of millions of years ago to its rate of expansion today, these astronomers discovered that the expansion is actually speeding up instead of slowing down as everyone had expected. 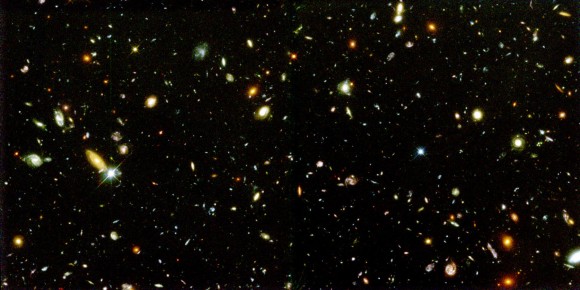 What pushes galaxies like these in the Hubble deep field apart? Image credit: NASA and A. Riess (STScI)

Instead of pulling the galaxies in the universe together, gravity seems to be driving them apart. But how can gravity be repulsive, when our everyday experience shows that it’s attractive? Einstein’s theory of gravity in fact predicts that gravity can repel as well as attract, but only under very special circumstances. 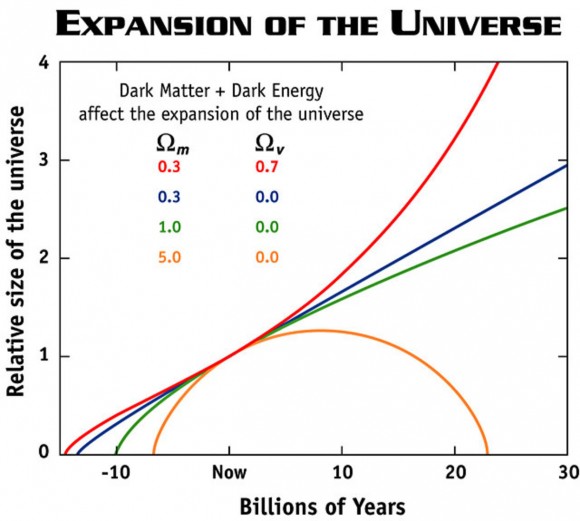 Scientists used to think that the expansion of the universe was described by the yellow, green, or blue curves. But surprise, it’s actually the red curve instead.

The simplest form of dark energy goes by two different names: a cosmological constant or vacuum energy. Vacuum energy has another strange property. Imagine a box that expands as the universe expands. The amount of matter in the box stays the same as the box expands, but the volume of the box goes up, so the density of matter in the box goes down. In fact, the density of everything goes down as the universe expands. Except for vacuum energy – its density stays exactly the same. (Yes, that’s as bizarre as it sounds. It’s like stretching a string of taffy and discovering that it never gets any thinner). 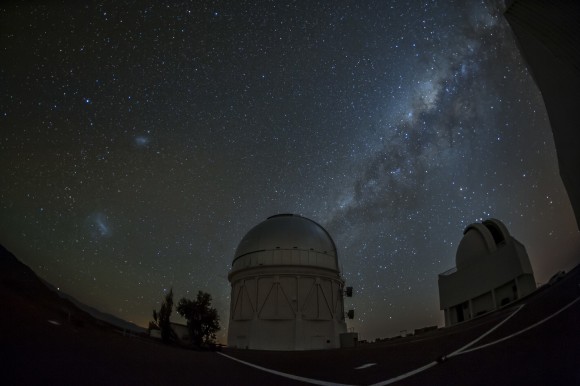 Astronomers continue to probe the skies, looking for finer details that can build on what we suspect about dark energy. Photo credit: Reidar Hahn

Since dark energy can’t be isolated or probed in the laboratory, how can we hope to understand exactly what it’s made of? Different theories for dark energy predict small differences in the way that the expansion of the universe changes with time, so our best hope of probing dark energy seems to come from ever more accurate measurements of the acceleration of the universe, building on that first discovery 17 years ago. Different groups of scientists are currently undertaking a wide range of these measurements. For example, the Dark Energy Survey is mapping out the distribution of galaxies in the universe to help resolve this puzzle.

There is one other possibility: maybe scientists have been barking up the wrong tree. Maybe there is no dark energy, and our measurements actually mean that Einstein’s theory of gravity is wrong and needs to be fixed. This would be a daunting undertaking, since Einstein’s theory works exceptionally well when we test it in the solar system. (Let’s face it, Einstein really knew what he was doing). So far, no one has produced a convincing improvement on Einstein’s theory that predicts the correct expansion for the universe and yet agrees with Einstein’s theory inside the solar system. I’ll leave that as a homework problem for the reader. 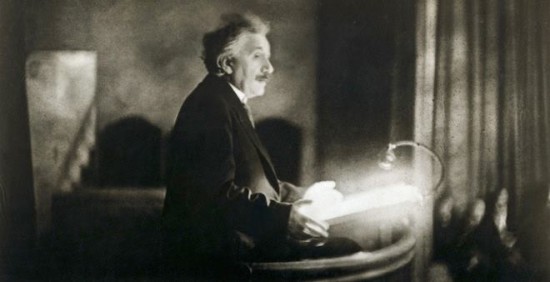 This article was originally published in The Conversation. Read the original article.