Humans have been speculating about their existence for thousands of years, but ours is the 1st generation to know, with certainty, that exoplanets are really out there. 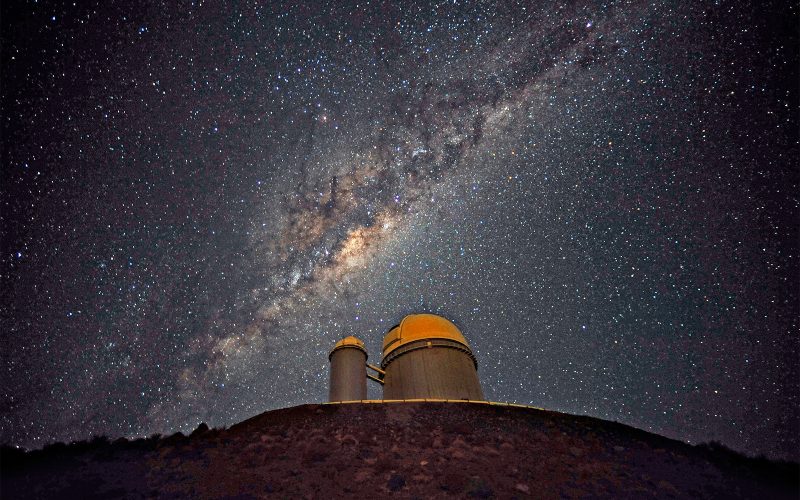 The Milky Way, our own galaxy, stretches across the sky above the La Silla telescope in Chile. Hidden inside our own galaxy are trillions of planets, most waiting to be found. Image via ESO/S. Brunier.

Step outside on a clear night, and you can be sure of something our ancestors could only imagine: Every star you see likely plays host to at least one planet.

The worlds orbiting other stars are called exoplanets, and they come in a wide variety of sizes, from gas giants larger than Jupiter to small, rocky planets about as big around as Earth or Mars. They can be hot enough to boil metal or locked in deep freeze. They can orbit their stars so tightly that a year lasts only a few days; they can orbit two suns at once. Some exoplanets are sunless rogues, wandering through the galaxy in permanent darkness.

That galaxy, the Milky Way, is the thick stream of stars that cuts across the sky on the darkest, clearest nights. Its spiraling expanse probably contains about 400 billion stars, our sun among them. And if each of those stars has not just one planet, but, like ours, a whole system of them, then the number of planets in the galaxy is truly astronomical: We’re already heading into the trillions. 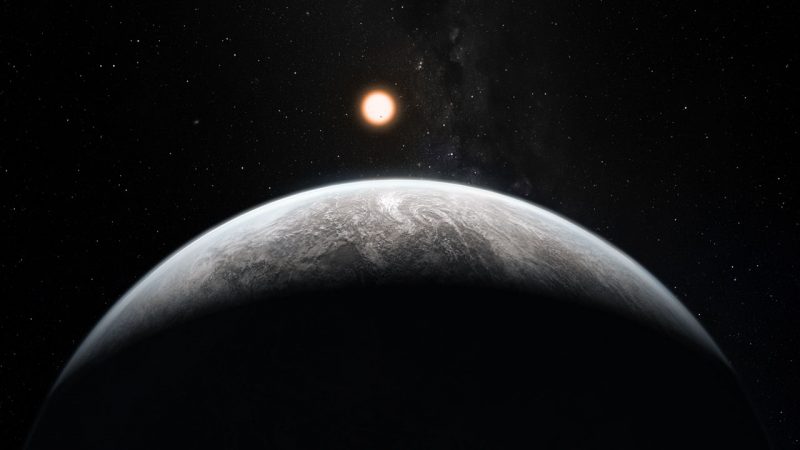 This rocky super-Earth is an illustration of the type of planets future telescopes, like TESS and James Webb, hope to find outside our solar system. Image via ESO/M. Kornmesser

We humans have been speculating about such possibilities for thousands of years, but ours is the first generation to know, with certainty, that exoplanets are really out there. In fact, way out there. Our nearest neighboring star, Proxima Centauri, was recently found to possess at least one planet – probably a rocky one. It’s 4.5 light-years away – more than 25 trillion miles (40 trillion km). The bulk of exoplanets found so far are hundreds or thousands of light-years away.

The bad news: As yet we have no way to reach them, and won’t be leaving footprints on them anytime soon. The good news: We can look in on them, take their temperatures, taste their atmospheres and, perhaps one day soon, detect signs of life that might be hidden in pixels of light captured from these dim, distant worlds.

The first exoplanet to burst upon the world stage was 51 Pegasi b, a hot Jupiter 50 light-years away that is locked in a four-day orbit around its star. The watershed year was 1995. All of a sudden, exoplanets were a thing.

When a planet passes directly between its star and an observer, it dims the star’s light by a measurable amount. Video via NASA/JPL-Caltech

But a few hints had already emerged. A planet now known as Tadmor was detected in 1988, though the discovery was withdrawn in 1992. Ten years later, more and better data showed definitively that it was really there after all.

And a system of three pulsar planets also had been detected, beginning in 1992. These planets orbit a pulsar some 2,300 light-years away. Pulsars are the high-density, rapidly spinning corpses of dead stars, raking any planets in orbit around them with searing lances of radiation.

Now we live in a universe of exoplanets. The count of confirmed planets is 3,700, and rising. That’s from only a small sampling of the galaxy as a whole. The count could rise to the tens of thousands within a decade, as we increase the number, and observing power, of robotic telescopes lofted into space.

How did we get here?

We’re standing on a precipice of scientific history. The era of early exploration, and the first confirmed exoplanet detections, is giving way to the next phase: sharper and more sophisticated telescopes, in space and on the ground. They will go broad but also drill down. Some will be tasked with taking an ever more precise population census of these far-off worlds, nailing down their many sizes and types. Others will make a closer inspection of individual planets, their atmospheres, and their potential to harbor some form of life.

Direct imaging of exoplanets – that is, actual pictures – will play an increasingly larger role, though we’ve arrived at our present state of knowledge mostly through indirect means. The two main methods rely on wobbles and shadows. The wobble method, called radial velocity, watches for the telltale jitters of stars as they are pulled back and forth by the gravitational tugs of an orbiting planet. The size of the wobble reveals the weight, or mass, of the planet.

This evocative movie of four planets more massive than Jupiter orbiting the young star HR 8799 is a composite of sorts, including images taken over seven years at the W.M. Keck observatory in Hawaii. Image via Jason Wang/Christian Marois.

But the vast majority of exoplanets have been found by searching for shadows: the incredibly tiny dip in the light from a star when a planet crosses its face. Astronomers call this crossing a transit.

The size of the dip in starlight reveals how big around the transiting planet is. Unsurprisingly, this search for planetary shadows is known as the transit method.

NASA’s Kepler space telescope, launched in 2009, has found nearly 2,700 confirmed exoplanets this way. Now in its K2 mission, Kepler is still discovering new planets, though its fuel is expected to run out soon.

Each method has its pluses and minuses. Wobble detections provide the mass of the planet, but give no information about the planet’s girth, or diameter. Transit detections reveal the diameter but not the mass.

But when multiple methods are used together, we can learn the vital statistics of whole planetary systems – without ever directly imaging the planets themselves. The best example so far is the TRAPPIST-1 system about 40 light-years away, where seven roughly Earth-sized planets orbit a small, red star.

The TRAPPIST-1 planets have been examined with ground and space telescopes. The space-based studies revealed not only their diameters, but the subtle gravitational influence these seven closely packed planets have upon each other; from this, scientists determined each planet’s mass.

So now we know their masses and their diameters. We also know how much of the energy radiated by their star strikes these planets’ surfaces, allowing scientists to estimate their temperatures. We can even make reasonable estimates of the light level, and guess at the color of the sky, if you were standing on one of them. And while much remains unknown about these seven worlds, including whether they possess atmospheres or oceans, ice sheets or glaciers, it’s become the best-known solar system apart from our own.

Where are we going?

The next generation of space telescopes is upon us. First up was Wednesday’s launch of TESS, the Transiting Exoplanet Survey Satellite. This extraordinary instrument will take a nearly full-sky survey of the closer, brighter stars to look for transiting planets. Kepler, the past master of transits, will be passing the torch of discovery to TESS.

TESS, in turn, will reveal the best candidates for a closer look with the James Webb Space Telescope, currently scheduled to launch in 2020. The Webb telescope, deploying a giant, segmented, light-collecting mirror that will ride on a shingle-like platform, is designed to capture light directly from the planets themselves. The light then can be split into a multi-colored spectrum, a kind of bar code showing which gases are present in the planet’s atmosphere. Webb’s targets might include super Earths, or planets larger than Earth but smaller than Neptune – some that could be rocky planets like super-sized versions of our own. 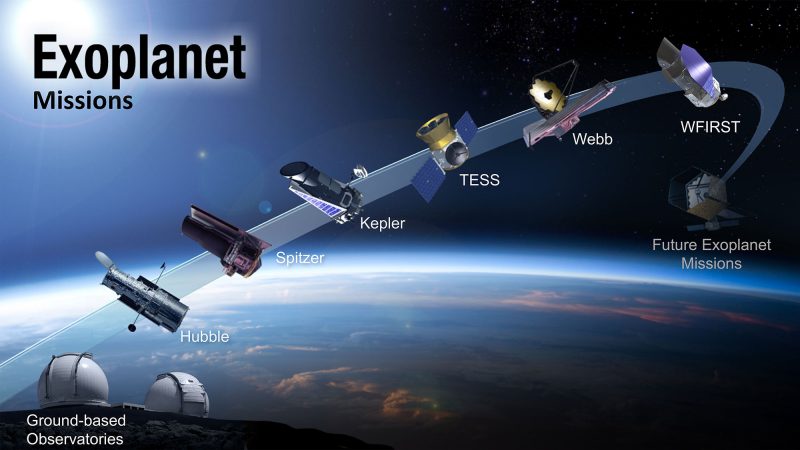 An illustration of the different missions and observatories in NASA’s exoplanet program, both present and future. Image via NASA.

Little is known about these big planets, including whether some might be suitable for life. If we’re very lucky, perhaps one of them will show signs of oxygen, carbon dioxide and methane in its atmosphere. Such a mix of gases would remind us strongly of our own atmosphere, possibly indicating the presence of life.

But hunting for Earth-like atmospheres on Earth-sized exoplanets will probably have to wait for a future generation of even more powerful space probes in the 2020s or 2030s.

Thanks to the Kepler telescope’s statistical survey, we know the stars above are rich with planetary companions. And as we stare up at the night sky, we can be sure not only of a vast multitude of exoplanet neighbors, but of something else: The adventure is just beginning.

Bottom line: Worlds orbiting other stars are called exoplanets. How we know they’re out there, plus the potential for finding more via the newly launched TESS mission.