Astronomers have caught a monster black hole in the act of eating a star. But, they say, stars are not standard fare for black holes. 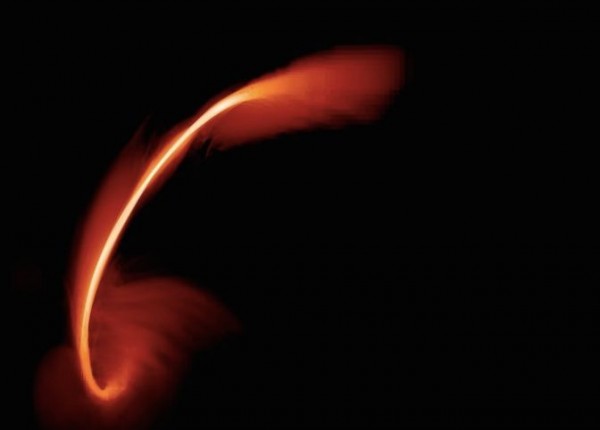 A snapshot image from a computer simulation of a star disrupted by a supermassive black hole. The red-orange plumes show the debris of the star after its passage near the black hole (located close to the bottom left corner of the image). About half of the disrupted star moves in elliptical orbits around the black hole and forms an accretion disc which eventually shines brightly in optical and X-rays. Image courtesy J. Guillochon (Harvard) and E. Ramirez-Ruiz (UC Santa Cruz)

Gigantic black holes live in the cores of large galaxies all around us. Astronomers have long believed they feed on interstellar gas – and sometimes stars – that happen to pass nearby. The process, which takes place over tens to hundreds of millions of years, turns big black holes into the supermassive monsters thought to lurk in the cores of most galaxies, including our Milky Way. This week (July 23, 2015), astronomers at the Max-Planck Institute for Extraterrestrial Physics near Munich, Germany said they’ve caught a black hole in the act of destroying and devouring a big star in its vicinity. With a mass of 100 million suns, it’s the largest black hole caught in this act so far. The discovery also helps confirm that, while gas is standard fare for black holes at the centers of galaxies, black holes do enjoy an occasional star, too. The results of this study are published in this month’s issue of the Monthly Notices of the Royal Astronomical Society.

Andrea Merloni and his team at the Max-Planck Institute made this discovery accidentally. They were exploring the huge archive of the Sloan Digital Sky Survey in preparation for a future X-ray satellite mission. This sky survey has been observing a large fraction of the night sky with its optical telescope and, in the course of the survey, spectra – the band of colors produced when light is separated into a range of wavelengths – have been acquired for distant galaxies and black holes.

For a variety of reasons, some objects have their spectra taken more than once.

When the team was looking at one of the objects with multiple spectra – labeled with the catalogue number SDSS J0159+0033 – they were struck by an extraordinary change over time. Andrea Merloni said in a statement:

Usually distant galaxies do not change significantly over an astronomer’s lifetime, i.e. on a timescale of years or decades, but this one showed a dramatic variation of its spectrum, as if the central black hole had switched on and off.

The statement from Max-Planck explained:

This happened between 1998 and 2005, but nobody had noticed the odd behavior of this galaxy until late last year, when two groups of scientists* preparing the next … generation of [Sloan sky] surveys independently stumbled across these data.

Luckily enough, the two flagship X-ray observatories, the ESA-led XMM-Newton and the NASA-led Chandra took snapshots of the same area of the sky close in time to the peak of the flare, and again about 10 years later.

This gave the astronomers unique information about the high-energy emission that reveals how material is processed in the immediate vicinity of the central black hole.

For decades, computer models have suggested that, when a black hole swallows a star, strong gravitational forces – what astronomers call tidal forces – tear the star apart in a spectacular way. Bits and pieces of the shredded star swirl into the black hole. Today’s theoretical astronomers have recognized that this process would produce huge flares of radiation that can be as luminous as all the rest of the stars in a host galaxy. These rare events are called tidal disruption flares.**

Merloni and his collaborators quite quickly realized that “their” flare matched almost perfectly all the expectations of this model.

Moreover, because of the serendipitous nature of the discovery, they realized that this was an even more peculiar system than those which had been found through active searches until now. With an estimated mass of 100 million solar masses, this is the biggest black hole caught in the act of star-tearing so far.

The sheer size of the system is intriguing, but this particular flare also let these scientists determine – with some degree of certainty – that the black hole was on a more standard gas diet very recently (a few tens of thousands of years).

Louis Pasteur said: ‘Chance favours the prepared mind’ – but in our case, nobody was really prepared.

We could have discovered this unique object already 10 years ago, but people did not know where to look. It is quite common in astronomy that progress in our understanding of the cosmos is helped by serendipitous discoveries. And now we have a better idea of how to find more such events, and future instruments will greatly expand our reach.

These astronomers point to a new X-ray telescope eROSITA, which is currently being built at the Max-Planck Institute and which will be put into orbit on the Russian-German SRG satellite about two years from now. They say it will scan the entire sky with the right “cadence and sensitivity” needed to discover hundreds of new tidal disruption flares.

Also, they say, big optical telescopes are being designed and built with the goal of monitoring the variable sky. These telescopes, too, will greatly contribute to understanding what black holes like to eat.

* The other group that independently discovered the strange light curve of this object was Stephanie LaMassa (Yale) and collaborators.

** Tidal disruption flares are very rare, about one every few tens of thousands of year for any galaxy. In addition, because they do not last very long, they are very hard to find. Only about 20 of them have been studied so far, but with the advent of larger telescopes designed to survey large areas of the sky in a short time, more and more dedicated searches are being carried out, and the pace of discovery is increasing.

Bottom line: Astronomers stumbled on data showing an “extraordinary change over time” in the spectra of a black hole. They believe they’ve caught this black hole in the act of eating a star. It’s the biggest black hole caught in this act so far. What’s more, the study of this object shows that standard fare for black holes is not stars, but gas.

Via Max-Planck Institute for Extraterrestrial Physics