What made these weird straight lines on Dione?

Planetary scientists have discovered some very unusual long straight lines on the surface of Saturn’s moon Dione. What created them? 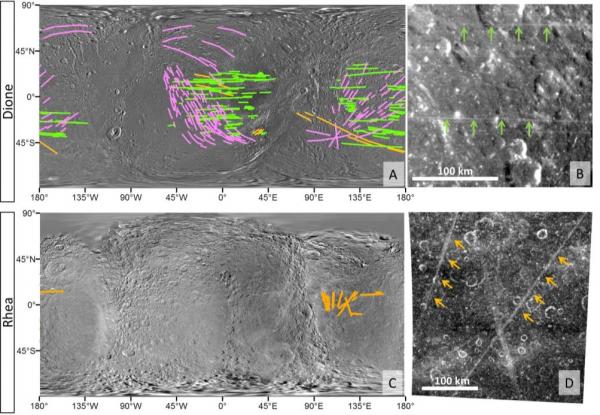 There are many dozens of moons in the solar system, and all of them are unique, ranging from tiny asteroid-like bodies to worlds with subsurface oceans and methane seas. The more that we explore these moons, the more surprises that are discovered; another such unexpected discovery was just announced by planetary scientists that has them scratching their heads – long, straight lines on Saturn’s moon Dione which look like they were “painted” on the surface. They are similar to ones on another moon of Saturn – Rhea – but much more numerous.

The unusual finding was announced by the Planetary Science Institute (PSI) on October 24, 2018, and a new paper has been published in the peer-reviewed journal Geophysical Research Letters. From the paper:

After the arrival of the Cassini spacecraft to the Saturnian system, unusual linear features were observed across Dione. We also noticed similar features on Saturn’s moon Rhea. We name these features linear virgae (virgae meaning a stripe or streak of color) and report on their distribution and characteristics as they are observed on the surfaces of Dione and Rhea. Our understanding of the distribution of linear virgae across Rhea is incomplete, likely because of data coverage; however, on Dione, we find that linear virgae are parallel to the equator and are confined to the region between 45 degrees north and 45 degrees south. We explored different ways of forming linear features on planetary surfaces and favor the draping of exogenic material across a planetary surface by encounters with either Saturn’s rings, co-orbital moons, or close flyby of comets. This debris may introduce materials into the Dione system that could contribute to creating a more habitable Dione. 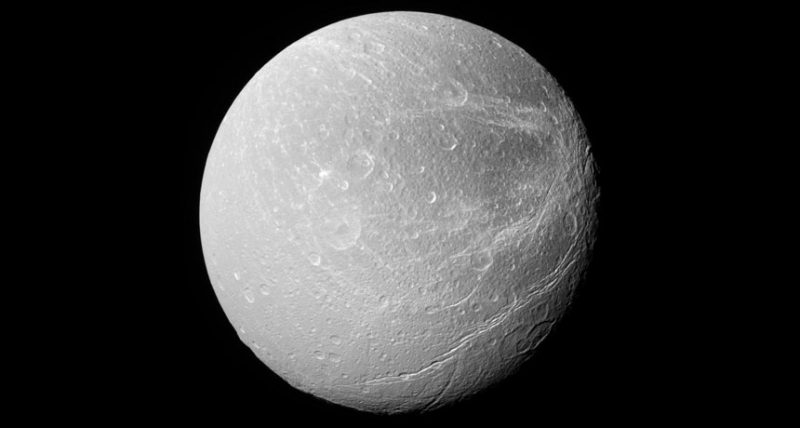 Saturn’s moon Dione as seen by the Cassini spacecraft. The bright wispy streaks seen here are not the same as the long, straight linear features elsewhere on the moon. Image via Space Science Institute/NASA/JPL.

The lines – known as linear virgae – are 10 to 100s of kilometers long, less than 5 kilometers wide, run parallel to each other and the equator, and are brighter than the underlying terrain. Their “painted look” comes from the fact that they overlie surface features and seem to ignore topography. As PSI research scientist Alex Patthoff explained:

The lines were discovered by Patthoff and Emily S. Martin of the Center for Earth and Planetary Studies at the National Air and Space Museum while examining images of Dione sent back by the Cassini spacecraft, which ended its long 13-year mission in September of last year. The features have been difficult to explain, as Patthoff noted:

Their orientation, parallel to the equator, and linearity are unlike anything else we’ve seen in the solar system. If they are caused by an exogenic source, that could be another means to bring new material to Dione. That material could have implications for the biological potential of Dione’s subsurface ocean. 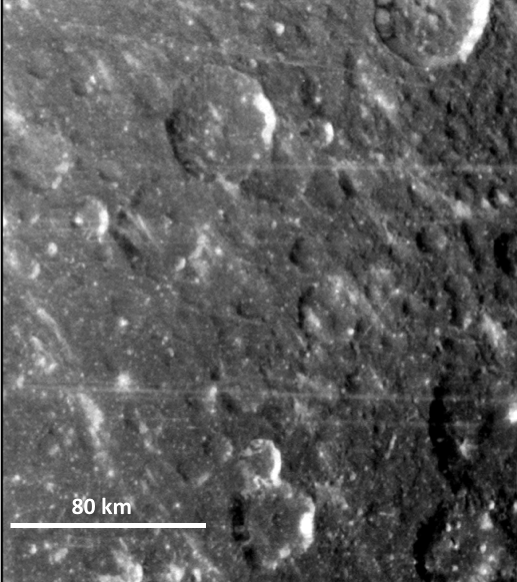 A view of some of the long linear features on Dione. Image via NASA/Emily Martin/Alex Patthoff.

It is tempting to consider that maybe they are not even natural features at all, although Occam’s Razor would suggest that they are most likely natural in origin. As Patthoff also commented in GeoSpace:

I’ve never seen anything this linear anywhere in the solar system. You can take a ruler to these images and you can trace them along this perfectly straight line for tens of kilometers or more sometimes. You just don’t see these kinds of things in nature.

But since the lines seem to be so unique, what could have made them? The researchers first looked at known mechanisms for creating long linear patterns, such as tectonic faults, rolling boulders, pit/crater chains or comet impacts, but none of those explanations were adequate. According to Martin: 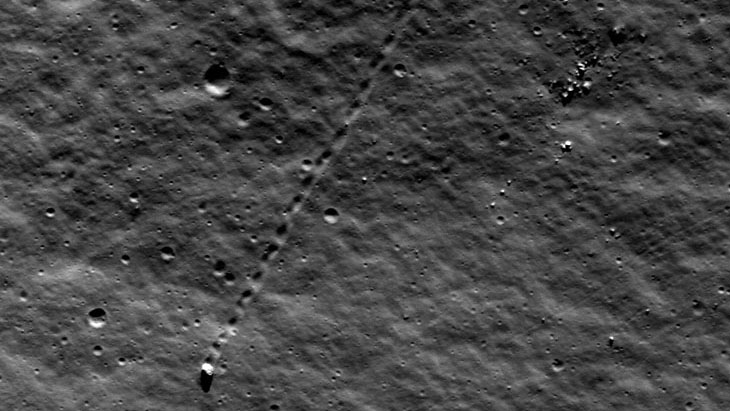 A linear groove on Earth’s moon, created by a rolling boulder. Image via Arizona State University/GSFC/NASA.

As she also told Science News:

They’re just really bizarre. It’s really exciting when you see something really strange, and you’re just trying to figure out what the heck it could possibly be.

Since the lines overlie other topography, this also suggests that they are younger than the underlying terrain – they are different from any kind of linear crater/pit chains or grooves, since they lie on top of the terrain, not carved into it.

So what is the most likely explanation? The researchers think that they are most probably due to impacts from dust-sized material with low enough mass and velocity to form long, linear streaks while being deposited onto Dione’s surface, rather than forming craters. That debris may have come from Saturn’s rings, from the two other moons also within Dione’s orbit or from somewhere outside the Saturnian system. This is still just a hypothesis, however, at this point.

Dione is thought to have a subsurface ocean, like the ones on Europa, Enceladus, Titan and Ganymede. It is possible that the material could make its way into Dione’s ocean, perhaps affecting its habitability. According to Martin:

If we as geologists can do a better job of saying where material is coming from and how it is being introduced into these different environments then we can be a little bit more confident about whether or not Dione has an environment that is either habitable or whether or not that environment might be suitable for generating its own life.

Bottom line: These weird long straight lines on Dione – like those on Rhea – are unusual and seemingly out of place on their moons’ otherwise desolate surfaces. Scientists have some ideas how they may have formed, but a more definitive solution to the mystery will require further study.