NASA and ESA will provide live online coverage of the November 12 Rosetta mission’s scheduled landing of a probe on a comet. Here’s how to watch. 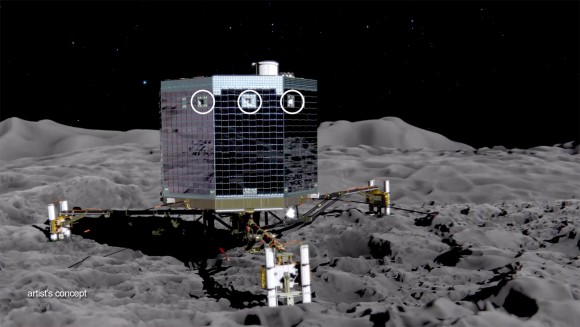 This artist’s concept of the Rosetta mission’s Philae lander on the surface of comet 67P/Churyumov-Gerasimenko, is from an animation showing the upcoming deployment of Philae and its subsequent science operations on the surface of the comet. Image credit: ESA

Here are some times to pay attention to, if you want to watch the event live.

Rosetta spacecraft will do the equivalent of transferring an object from one speeding bullet to another, when it tries to place its Philae lander on its comet. Read more about the mission’s dramatic attempt to land on a comet here.

After landing, Philae will obtain the first images ever taken from a comet’s surface. It also will drill into the surface to study the composition and witness close up how a comet changes as its exposure to the sun varies.

Philae can remain active on the surface for approximately two-and-a-half days. Its “mothership” – the Rosetta spacecraft – will remain in orbit around the comet through 2015. The orbiter will continue detailed studies of the comet as it approaches the sun for its July 2015 perihelion (closest point), and then moves away.

Comets are considered primitive building blocks of the solar system that are literally frozen in time. They may have played a part in “seeding” Earth with water and, possibly, the basic ingredients for life.

Bottom line: Both NASA and ESA will provide live online coverage on Wednesday, November 12, 2014 of the Rosetta mission’s scheduled landing of a probe on comet 67P/Churyumov-Gerasimenko. ESA will also provide coverage beginning on Tuesday, November 11. Details in this post.