Dramatic attempt to land on a comet coming Wednesday

Rosetta spacecraft will do the equivalent of transferring an object from one speeding bullet to another, when it tries to place its Philae lander on its comet. 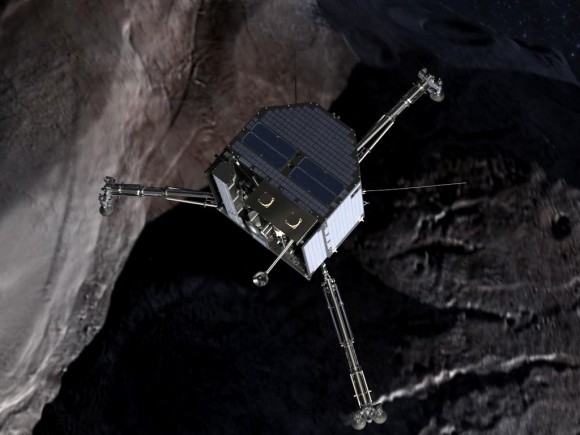 The Rosetta mission’s Philae lander is about the size of a washing machine. It has legs to cushion its impact, a thruster to push it down, and a harpoon that will act like an anchor on the comet’s surface. This image is an artist’s illustration, a frame from the movie “Chasing A Comet – The Rosetta Mission.”

Space fans around the world are waiting excitedly for Wednesday of this week, when the ESA’s Rosetta spacecraft will attempt a first-ever soft landing of a robotic probe on a comet. The Philae (fee-LAY) lander is scheduled to touch down on Comet 67P/Churyumov-Gerasimenko on November 12, 2014 at 10:35 a.m. EST (7:35 a.m PST/15:35 UTC). We on Earth – 300 million miles (500 million km) away – won’t know the lander has set down successfully until a signal is received back at about 11:02 a.m. EST (8:02 a.m. PST/16:02 UTC). If all goes as planned, it’ll be an awesome achievement, a feat described by Dutch astrophysicist Dr Fred Jansen – Rosetta’s mission manager – as trying to:

… do the equivalent of transferring an object from one speeding bullet to another.

The comet and Rosetta are flying through space at 60,000km an hour. In many, many aspects this is an absolute first.

The landing site – formerly known simply as Site J – now has an official name. It’s been given the name Agilkia, chosen after an ESA public essay competition. The name is in keeping with Rosetta’s Egyptian theme. The mission itself was named Rosetta after a stone slab inscribed with a decree issued in 196 BC on behalf of King Ptolemy V of Egypt. The decree the key to our modern understanding of Egyptian hieroglyphs. The name Agilkia, meanwhile, refers to an island on the River Nile. Ancient buildings were relocated there after the island Philae flooded. 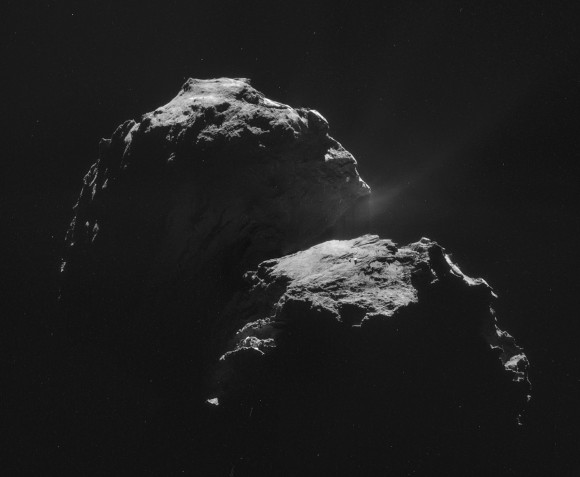 Here we are looking ‘down’ onto the top of the ‘head’ of Comet 67P/Churyumov-Gerasimenko, which is in darkness, along with Philae’s landing site, now called Agilkia (formerly Site J). The ‘chest’ of the comet is visible with the top of the ‘chest’ faintly lit by reflected sunlight off the ‘head’. Some outgassing is also visible. Image and caption via Andrew R. Brown; read more about this image.

After touchdown on November 12, the Philae lander will obtain the first images ever taken from a comet’s surface. It will also drill into the surface to study the composition, and witness close-up how the comet changes, as it sweeps closer to the sun day by day. Philae can remain active on the surface for about two-and-a-half days. Its mothership, the Rosetta spacecraft, will remain in orbit around 67P through the comet’s perihelion, or closest point to the sun, in July, 2015.

In addition to their well-deserved reputation as beautiful cosmic objects, comets hold vital clues about our solar system’s history. They are considered primitive building blocks of the solar system that are literally frozen in time, and they may have played a part in “seeding” Earth with water and, possibly, the basic ingredients for life.

Rosetta launched in March 2004 and spent 957 days in “hibernation” as it zoomed through the darkness of space.

It was “brought back to life” in January 2014 to prepare for its August arrival in orbit around comet 67P/Churyumov-Gerasimenko. Since August, Rosetta has been capturing sneak peeks of what lies ahead. Images have revealed stunning structures on the areas of the comet that are visible and illuminated. These features include steep ravines, sharp cliffs and numerous boulders. 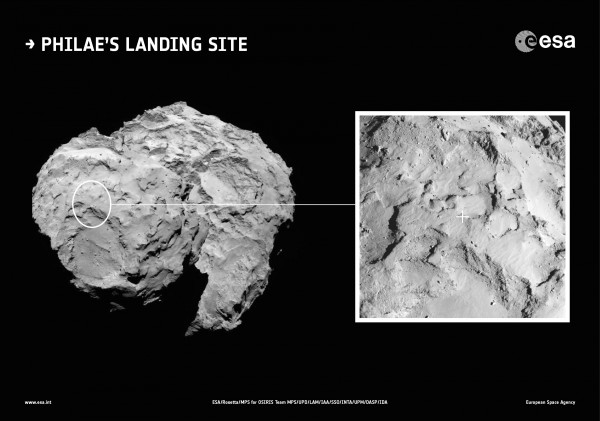 ESA has announced the Philae lander’s touch down point on Comet 67PChuryumov Gerasimenko. It’s Site J, which has been renamed Agilkia in keeping with the mission’s Egyptian theme. 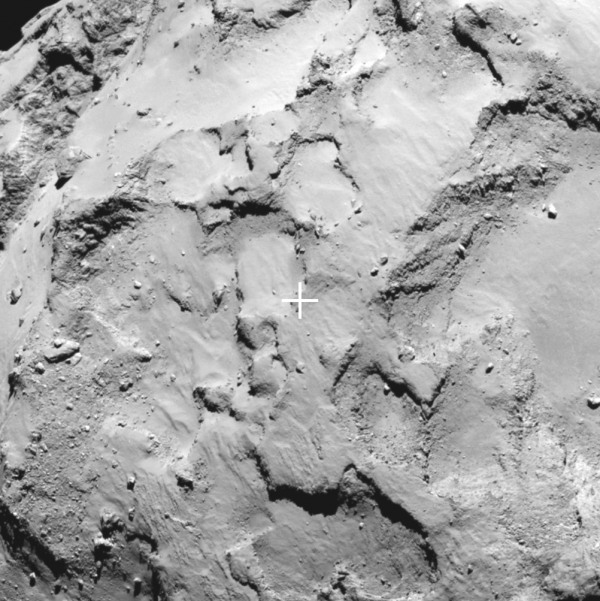 Closeup on the Agilkia landing site for the Philae lander in ESA’s exciting Rosetta comet mission.

Night side of a comet
Backscatter of sunlight from the dusty coma now surrounding Rosetta’s comet makes possible a rare glimpse – for most of us, our first – at a comet’s nightside.

Video: How to land on a comet