The mysterious yellow skies of WASP-79b

Scientists studying the huge, hot exoplanet WASP-79b have found that, surprisingly, the planet has yellow skies instead of blue. But why it does is still a mystery. 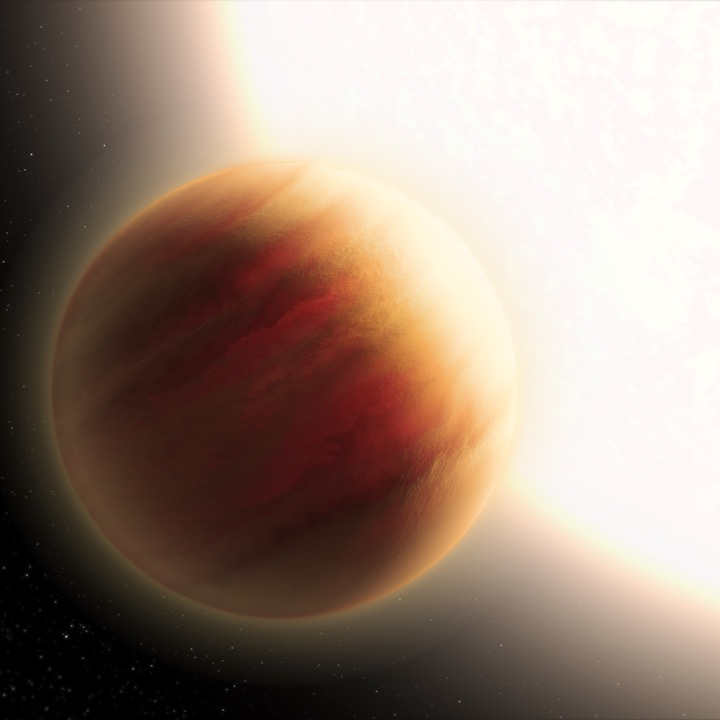 Artist’s concept of WASP-79b, a hot Jupiter-like exoplanet 780 light-years from Earth. New research shows the planet has a yellow sky instead of blue as expected. Image via NASA/ ESA/ L. Hustak (STScI)/ Hubblesite.

Earth is beautiful, and we might sometimes take it for granted that we can look up and see a deep blue sky. But what about other planets? A planet’s particular sky depends, of course, on its unique atmosphere. For example, we here on Earth have a blue sky because the blue component of our sun’s light is scattered in all directions by air molecules in Earth’s atmosphere. Mars, on the other hand, has a more pinkish sky due to ever-present dust lofted from Mars surface by winds. Now, scientists have announced results of a study of a distant exoplanet, orbiting a star hotter and brighter than our sun. This planet – called WASP-79b – doesn’t have a blue or pink sky, but instead a yellow one!

The finding was made by researchers combining data from the Hubble Space Telescope, the Transiting Exoplanet Survey Satellite (TESS) and the ground-based Magellan telescopes at the Las Campanas Observatory in Chile.

The intriguing results were first published December 10, 2019, in The Astrophysical Journal and later published in the January 2020 issue of the journal.

WASP-79b is a large gas giant planet of the type known as a hot Jupiter, which orbits very close to its star and completes an orbit in only 3 1/2 days. Its star, WASP-79, is about 780 light-years away in the constellation Eridanus the River.

Scientists had expected that the planet would experience Rayleigh scattering, where certain colors of light are dispersed by very fine dust particles in the upper atmosphere. This is what makes Earth’s skies blue, since shorter (bluer) wavelengths of sunlight are dispersed. 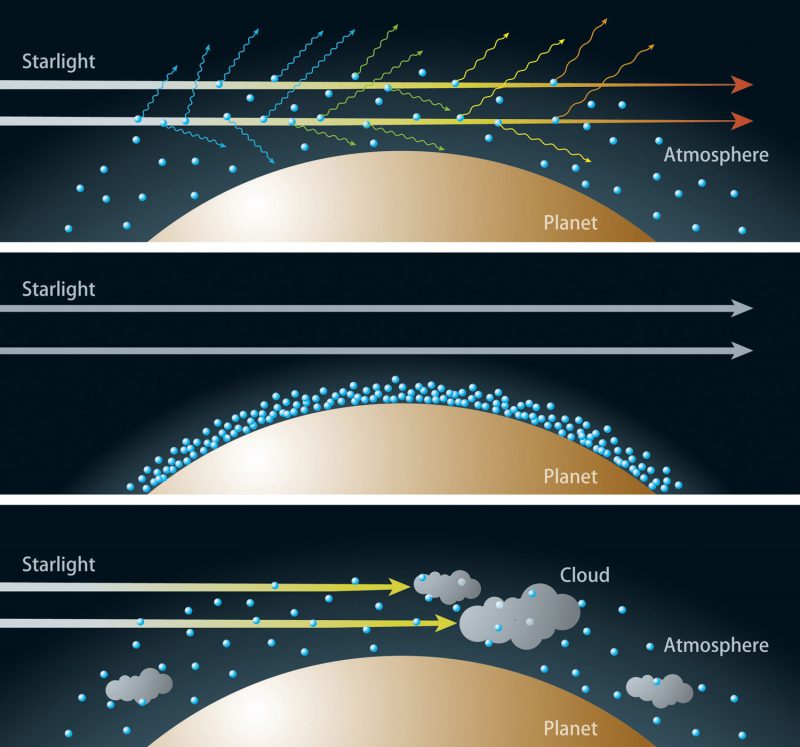 But that is not what the researchers found. The lack of Rayleigh scattering is unexpected and “weird” according to the scientists involved. It may be evidence for currently unknown atmospheric process on the planet. As a result, the planet’s skies are probably yellow in color. The researchers also found that the planet’s atmosphere is a humid and sizzling 3,000 degrees Fahrenheit (1,648 degrees Celsius). Hot! There might be molten iron rain coming down from its scattered manganese sulfide or silicate clouds.

WASP-79b is definitely a world very unlike Earth and not a place you would want to go to for a vacation. As lead study author Kristin Showalter Sotzen of the Johns Hopkins University Applied Physics Laboratory (JHUAPL) said in a statement:

This is a strong indication of an unknown atmospheric process that we’re just not accounting for in our physical models. I’ve shown the WASP-79b spectrum to a number of colleagues, and their consensus is ‘that’s weird.’

Because this is the first time we’ve see this, we’re really not sure what the cause is. We need to keep an eye out for other planets like this because it could be indicative of unknown atmospheric processes that we don’t currently understand. Because we only have one planet as an example we don’t know if it’s an atmospheric phenomenon linked to the evolution of the planet. 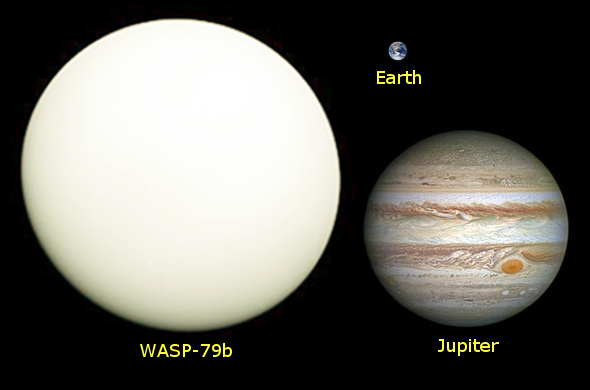 Comparison of the sizes of WASP-79b, Jupiter and Earth. Image via WASP Planets.

So how did the researchers determine the color of WASP-79b’s sky?

They did it by using a spectrograph on the Magellan telescopes. Spectrographs analyze the different wavelengths of light, and by doing so, in this case, can find clues as to the chemical composition of the exoplanet’s atmosphere. It was anticipated that the atmosphere of WASP-79b would have Rayleigh scattering like in Earth’s atmosphere, resulting in a blue sky. But – surprise – they found the opposite instead. There was less absorption and scattering in the atmosphere, meaning that the planet probably has a yellow sky instead of blue. The findings by the Magellan telescopes were also confirmed by TESS.

WASP-79 is now one of the largest stars known to have a planet, which makes this study even more interesting. So far, most exoplanets have been discovered orbiting red dwarfs, the most common stars in the galaxy, or around stars similar to our sun.

WASP-79b is huge, about 1.7 times the radius of Jupiter. Its deep, extended atmosphere, due to it being so hot, makes it an ideal exoplanet for study by the telescopes used in this study. It’s also interesting in other ways as well. 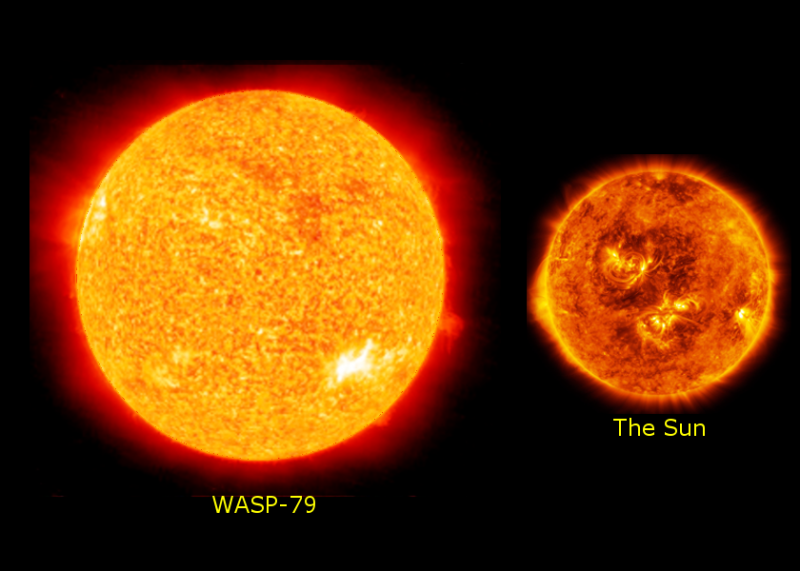 WASP-79 as compared in size to the sun. It is one of the largest stars known to have an exoplanet. Image via WASP Planets.

Previous studies of the planet by Hubble showed that it has water vapor in its atmosphere. This isn’t really too surprising in itself, despite the heat, but the finding may also help scientists better understand just what is going on in WASP-79b’s exotic atmosphere.

The newest unusual results will keep scientists busy, and should help shed light on how hot Jupiters and other giant planets form and evolve. In another press release from JHUAPL, Sotzen said:

We’re really not sure what’s going on here. But if similar features are found on other such worlds, it’s going to provoke questions about current theories on atmospheric processes and evolution. We’re trying to look at a lot of different hot Jupiters because they’re easier to analyze. What we learn from them will help us make predictions about the atmospheres of other exoplanets, like whether they have clouds or not. 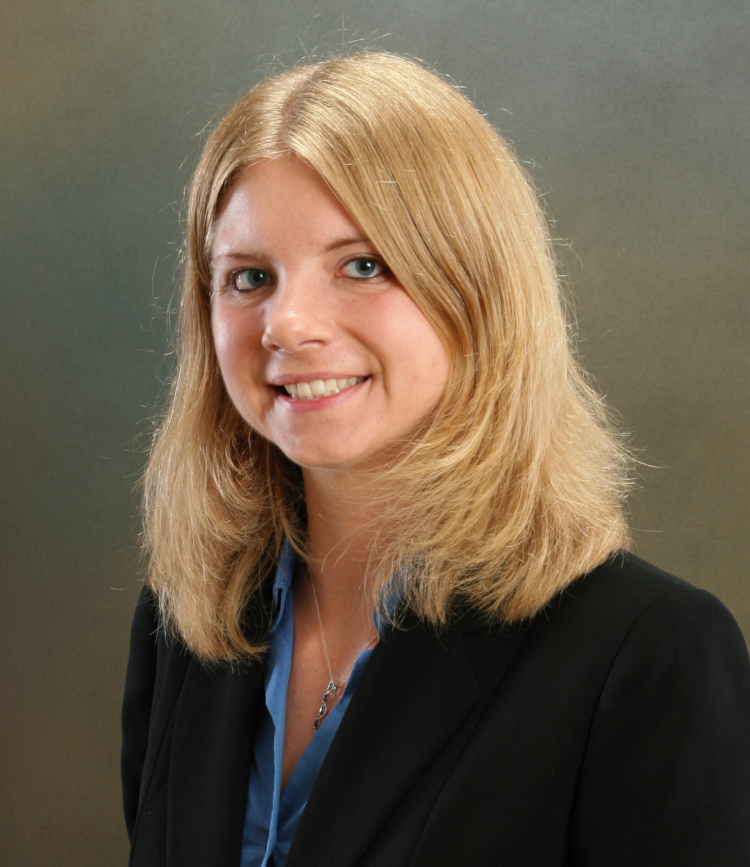 In our own solar system, we don’t know how much solid material contributed to the formation of the giant planets, how quickly they formed and by what processes, and even more importantly how they migrated after forming. As we obtain new results about exoplanets like WASP-79b, we’re collecting critical information about the formation of giant planets around other stars to better understand fundamental processes of planet formation and evolution.

The upcoming James Webb Space Telescope – tentatively scheduled to launch in 2021 – will be able to take an even better look at WASP-79b and analyze its chemical composition in more detail. This might help solve the mysteries of this intriguing, yellow-hued world.

Bottom line: Using three different telescopes, scientists have found that a huge, hot exoplanet has yellow skies instead of blue.

Source: Transmission Spectroscopy of WASP-79b from 0.6 to 5.0 um