NASA announced Dec. 10 that for the 2nd time in history, a human-made object has reached the space between the stars.

On December 10, 2018, NASA announced that, for the second time in history, a human-made object has reached the space between the stars.

NASA’s Voyager 2 probe now has exited the heliosphere – the protective bubble of particles and magnetic fields created by the sun.

Comparing data from different instruments aboard the spacecraft, mission scientists determined the probe crossed the outer edge of the heliosphere on November 5, 2018. 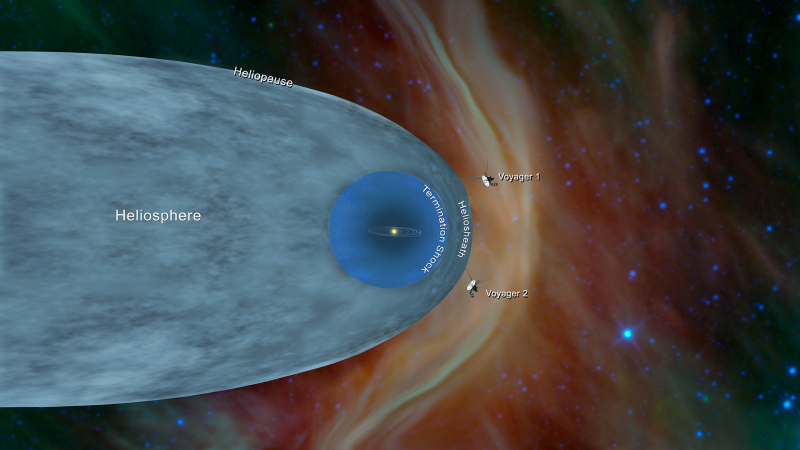 Artist’s concept showing the positions of the Voyager 1 and Voyager 2 probes, now both outside the heliosphere, or sphere of our sun’s influence. Image via NASA/JPL-Caltech.

This boundary, called the heliopause, is where the hot solar wind meets the cold, dense interstellar medium. Voyager 2’s twin spacecraft, Voyager 1, crossed this boundary in 2012, but Voyager 2 carries a working instrument that will provide first-of-its-kind observations of the nature of this gateway into interstellar space.

Voyager 2 now is slightly more than 11 billion miles (18 billion km) from Earth. Mission operators still can communicate with Voyager 2 as it enters this new phase of its journey, but information – moving at the speed of light – takes about 16.5 hours to travel from the spacecraft to Earth. By comparison, light traveling from the sun takes about eight minutes to reach Earth.Together, the two Voyagers provide a detailed glimpse of how our heliosphere interacts with the constant interstellar wind flowing from beyond.

While the probes have left the heliosphere, Voyager 1 and Voyager 2 have not yet left the solar system, and won’t be leaving anytime soon. The boundary of the solar system is considered to be beyond the outer edge of the Oort Cloud, a collection of small objects that are still under the influence of the sun’s gravity. The width of the Oort Cloud is not known precisely, but it is estimated to begin at about 1,000 astronomical units (AU) from the sun and to extend to about 100,000 AU (1 AU is the distance from the sun to Earth). It will take about 300 years for Voyager 2 to reach the inner edge of the Oort Cloud and possibly 30,000 years to fly beyond it.

Voyager 2 launched in 1977, 16 days before Voyager 1, and both have traveled well beyond their original destinations. The spacecraft were built to last five years and conduct close-up studies of Jupiter and Saturn. However, as the mission continued, additional flybys of the two outermost giant planets, Uranus and Neptune, proved possible. As the spacecraft flew across the solar system, remote-control reprogramming was used to give the Voyagers greater capabilities than they possessed when they left Earth. Their two-planet mission became a four-planet mission. Their five-year lifespans have stretched to 41 years, making Voyager 2 NASA’s longest running mission.

Each spacecraft carries a Golden Record of Earth sounds, pictures and messages. Since the spacecraft could last billions of years, these circular time capsules could one day be the only traces of human civilization.