Have astronomers found a hyper-volcanic exomoon?

Astronomers have found evidence for a possible exomoon orbiting a gas giant planet 550 light-years away. If they’re interpreting the evidence correctly, this moon would be a place of destruction, even more volcanically active than Jupiter’s famous volcanic moon, Io. 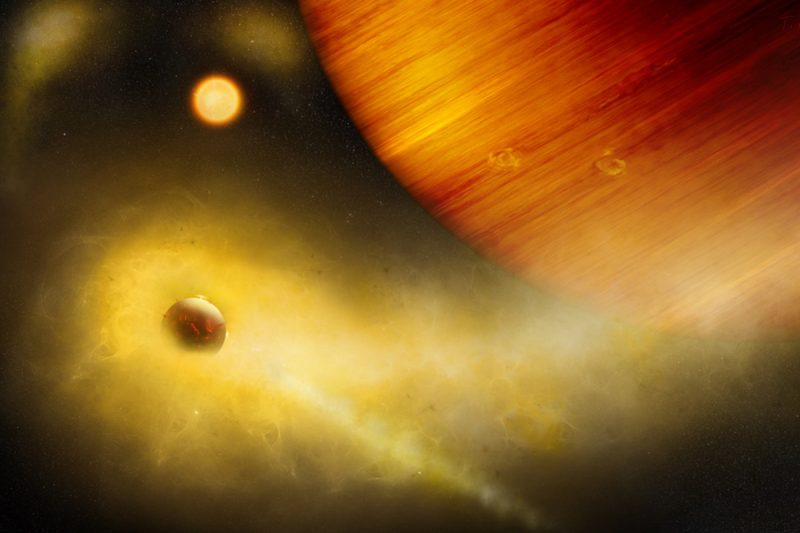 Artist’s concept of the moon orbiting WASP-49. The observations are similar to what’s seen with Jupiter and its moon Io in our own solar system. Researchers found sodium gas near WASP-49b, but far enough away that the gas is unlikely to be due to winds on the planet. Is this moon like Io on steroids? Image via University of Bern/Thibaut Roger.

Astronomers may have discovered a “hyper-volcanic” exomoon – an extreme version of Jupiter’s moon Io – orbiting a distant planet. A new study suggests that this possible moon, 550 light-years away, is even more volcanically active than Io, the most volcanically active body in our own solar system. An amazing discovery, if true.

The new peer-reviewed findings were published by researchers from the University of Bern in Switzerland, and a draft version of the new paper was posted on arXiv on August 29, 2019.

It would be a dangerous volcanic world with a molten surface of lava, a lunar version of close-in super-Earths like 55 Cancri e, a place where Jedis go to die, perilously familiar to Anakin Skywalker.

The possible exomoon would orbit a hot Jupiter gas giant planet – WASP-49b – that orbits its sun-like star, WASP-49 in the constellation Lepus. WASP-49b orbits its star in less than three days.

The exomoon hasn’t been confirmed yet, but there is good circumstantial evidence for its existence. The researchers found sodium gas near WASP-49b, but far enough away that it is unlikely to be due to winds on the planet. The observations are similar to what is seen with Jupiter and Io in our own solar system. According to Oza:

The neutral sodium gas is so far away from the planet that it is unlikely to be emitted solely by a planetary wind. The sodium is right where it should be. 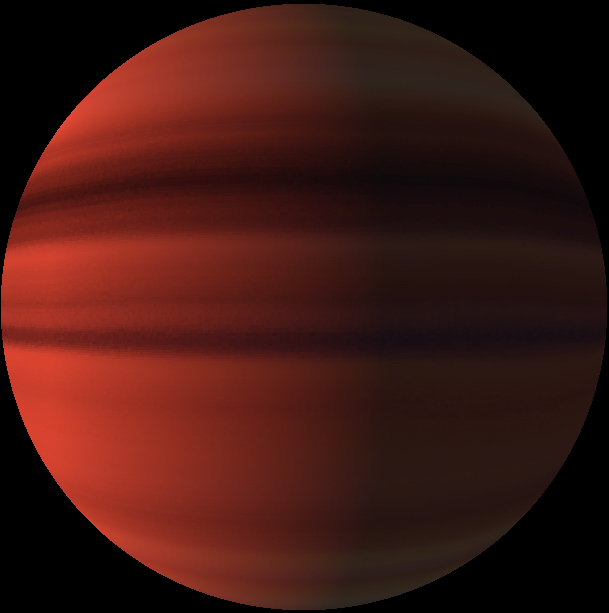 If confirmed, this would be an interesting analog to the Jupiter-Io system, but a more extreme version.

An earlier study in 2006 had also shown that large amounts of sodium near an exoplanet could be evidence for a moon, and that compact systems of a star, planet and moon – like with WASP-49 – could be stable for billions of years. According to Oza:

The enormous tidal forces in such a system are the key to everything. Sodium and potassium lines are quantum treasures to us astronomers because they are extremely bright. The vintage street lamps that light up our streets with yellow haze, are akin to the gas we are now detecting in the spectra of a dozen exoplanets.

While the researchers think that an exomoon is the most likely explanation, there are still other possibilities such as a ring of ionized gas around the planet. More data is needed, Oza said:

We need to find more clues. While the current wave of research is going towards habitability and biosignatures, our signature is a signature of destruction. 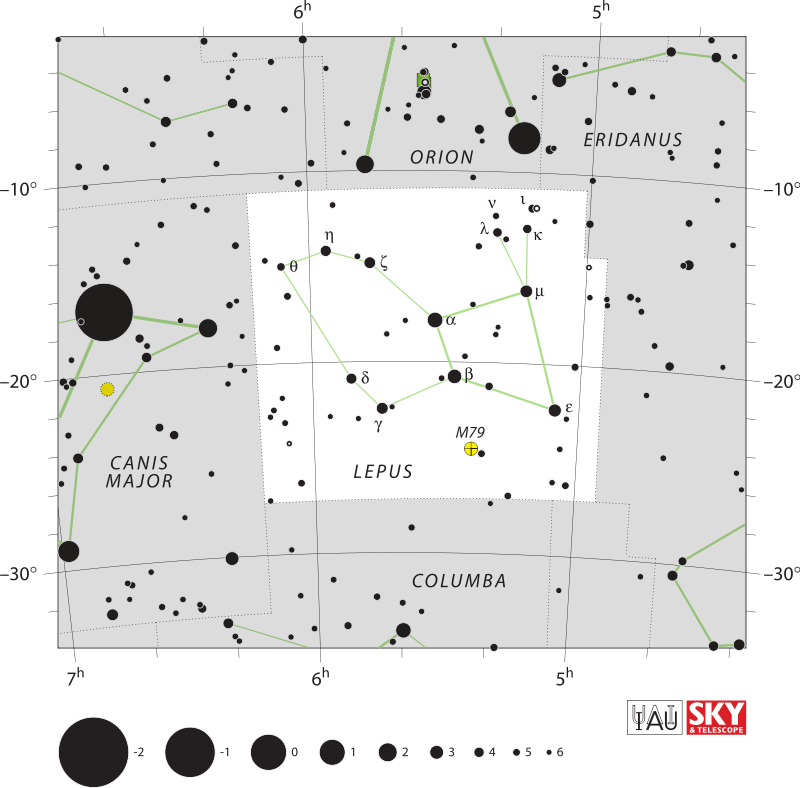 Exomoons by nature are extremely difficult to detect, and there has been only one other good candidate so far, a possible Neptune-sized moon orbiting the giant planet Kepler-1625b, 8,000 light-years away in the constellation Cygnus. Confirmation of the moon of WASP-49b would be exciting, not only because of it being a moon orbiting a distant planet in another solar system, but also because it would be a discovery of “destruction” in a planetary system. As Oza explained:

The exciting part is that we can monitor these destructive processes in real time, like fireworks.

The possible moon orbiting WASP-49b would be similar to Jupiter’s moon Io, but a more extreme version. That’s a remarkable finding, since Io is the most volcanically active body in our solar system, even more than Earth. Io has hundreds of sulfur volcanoes, many of which are erupting at any given time. The moon’s multi-colored surface is covered in new and old lava flows, including lakes of molten silicate lava, and its appearance is often compared to a pizza. The volcanic activity is so intense and persistent, the moon is essentially always “turning itself inside out.” It also has a very thin atmosphere of sulfur dioxide. 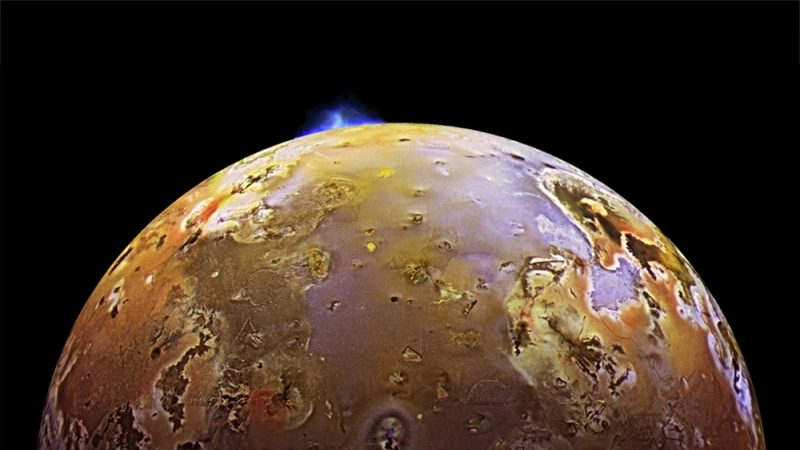 Volcanic plume from Pillan Patera on Io, the most volcanically active body in the solar system. Image via NASA/JPL/Discover Magazine.

Io’s volcanism is the result of its being continuously tugged at by Jupiter’s immense gravity, which keeps its insides molten. The process would probably be similar for the moon orbiting WASP-49b, which is also a gas giant planet. Io has been visited and observed by the Voyager, Cassini, Galileo and New Horizons spacecraft, but its volcanic eruptions are big enough to be seen by large telescopes on Earth.

If the moon is confirmed, it will be an incredible discovery: a tiny, distant world whose presence was given away by volcanic eruptions more powerful than any seen in our own solar system.