A proposed new mission to Venus

The proposed VERITAS mission to Venus is one of the finalists for NASA’s Discovery Program. If selected, it will revolutionize our knowledge about the planet’s geology and how this formerly habitable world became a fiery wasteland. 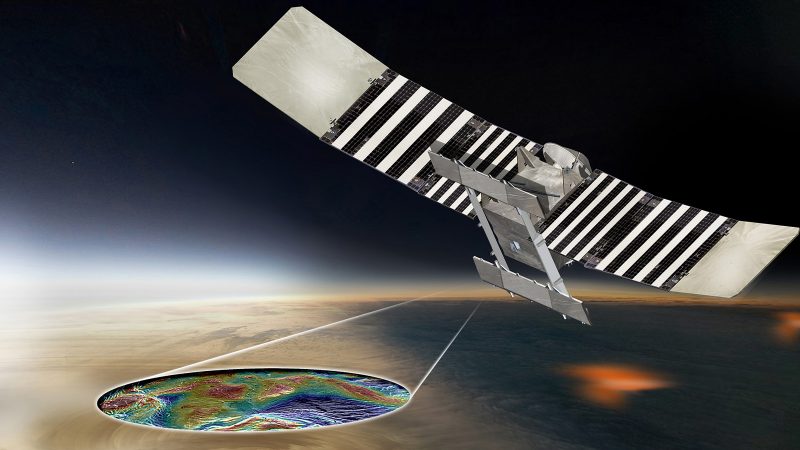 Artist’s concept of VERITAS spacecraft orbiting Venus, using its radar to peer through the planet’s dense clouds and produce high-resolution maps of its surface. Image via NASA/ JPL-Caltech.

Venus is often called Earth’s sister planet, and it’s also our closest planetary neighbor. It’s about the same size and density as Earth. But, beyond that, Venus is a very different – and hostile – world. While Earth is a garden, Venus is hot enough on its surface to melt lead. Scientists think that Venus used to be more Earthlike a few billion years ago, when the solar system was younger. Something happened that altered its evolutionary course forever, but exactly what that was is still not well understood. Somehow, Venus changed from being a clement world, possibly with oceans, to the cloud-enshrouded, searing hellhole we know today. A proposed new NASA mission, called VERITAS, would study Venus’ geology, both below and on the surface. It would try to answer fundamental questions about how this world ended up being so very different from our own.

The latest overview of the VERITAS mission was posted by NASA’s Jet Propulsion Laboratory (JPL) on July 8, 2020.

Venus is like this cosmic gift of an accident. You have these two planetary bodies – Earth and Venus – that started out nearly the same but have gone down two completely different evolutionary paths, but we don’t know why. 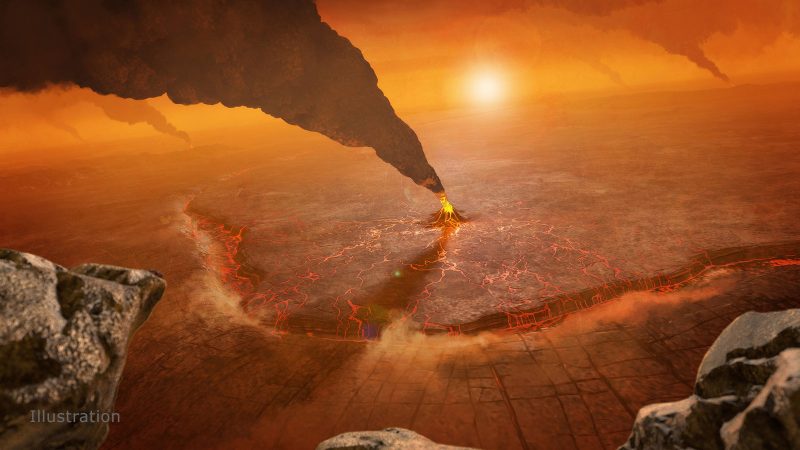 Artist’s concept of active volcano on Venus, and a subduction zone, where a tectonic plate on the surface sinks into the interior of the planet. Image via NASA/ JPL-Caltech/ Peter Rubin.

Venus is a rocky world like Earth, but its surface is completely obscured by a thick, dense atmosphere of carbon dioxide. Temperatures at the surface never fall below about 900 degrees Fahrenheit (500 degrees Celsius), and the pressure, similar to that deep in the oceans on Earth, would quickly crush humans. The clouds contain sulfuric acid. Not exactly the most hospitable place in the solar system, although higher up in the atmosphere, temperatures and pressures are much more clement.

VERITAS would peer through the dense clouds with radar and a near-infrared spectrometer to create 3-D global maps of the planet and analyze what the surface is composed of (we do know already that most of the surface is volcanic basalt). By measuring Venus’ gravitational field, VERITAS could also determine the structure of the planet’s interior. VERITAS would provide the most detailed analysis of Venus ever obtained by an orbiting spacecraft.

If selected, VERITAS would launch sometime in 2026. 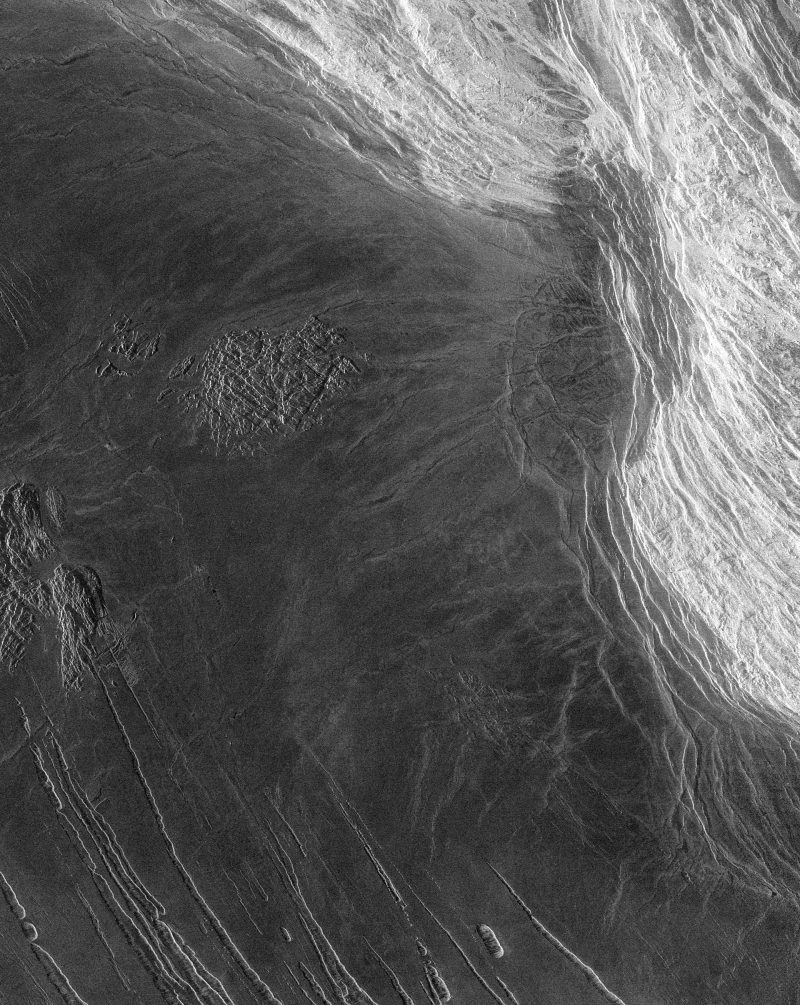 An example of tessera deformation terrain (white terrain on right side of image) on the western edge of Maxwell Montes on Venus. Image via NASA/ JPL/ Wikipedia.

Scientists are very interested in learning more about Venus, to understand why it changed so dramatically. This could also offer new insights into Earth’s own evolution as a planet, as well as other rocky planets orbiting other stars.

VERITAS will study Venus’ geology and the similarities it may have to that of the early Earth. The planet’s warm crust is thought to be a good analog to that of Earth a few billion years ago, when tectonic plates were just starting to form. Did the same thing happen on Venus? According to Joann Stock, a geologist and geophysicist at Caltech’s Seismological Laboratory in Pasadena:

The biggest mystery to me is the extent of deformation structures on Venus that could be studied to understand the nature of tectonic activity on the planet.

The deformation structures are areas of rock on the surface that have buckled under immense geologic pressure. On Earth, the outer crust is broken into tectonic plates that sit on top of the mantle. Some plates descend downward in a process called subduction, caused by convection in the mantle. Since the temperature increases the farther down you go, those plates start melting. This releases volcanic gases and other materials called volatiles, including water, nitrogen, carbon dioxide and methane into the atmosphere.

Could the deformation structures be a form of tectonic plates similar to those on the early Earth? VERITAS would help scientists answer that question. The 3-D topographic maps would be able to see features much smaller than previously possible with earlier missions. It could identify strike-slip faults, similar to San Andreas Fault in California, by seeing the raised topography on each side of the fault. If VERITAS found such formations, that would be evidence for substantial tectonic activity on the planet in the past, and perhaps even today. VERITAS would also use interferometric deformation maps – using interferometry – to look for active faulting on the planet’s surface, something never done before anywhere but on Earth.

If plate tectonics were to be confirmed on Venus, that would be an exciting discovery, since Earth is the only planet in our solar system known to have that kind of geological activity. (Jupiter’s moon Europa is now thought to have a more primitive form of plate tectonics, but Europa’s crust is composed of water ice, not rock).

The largest and most widespread deformation structures on Venus are called tessera, plateau-like regions that may be analogous to Earth’s continents. VERITAS would study their composition, to see if they formed in a similar manner to continents on Earth. That could provide valuable clues about the former ocean(s) that many scientists think once existed on Venus, Earth’s continents are thought to have formed when iron-rich oceanic crust subducted and melted in the presence of water. 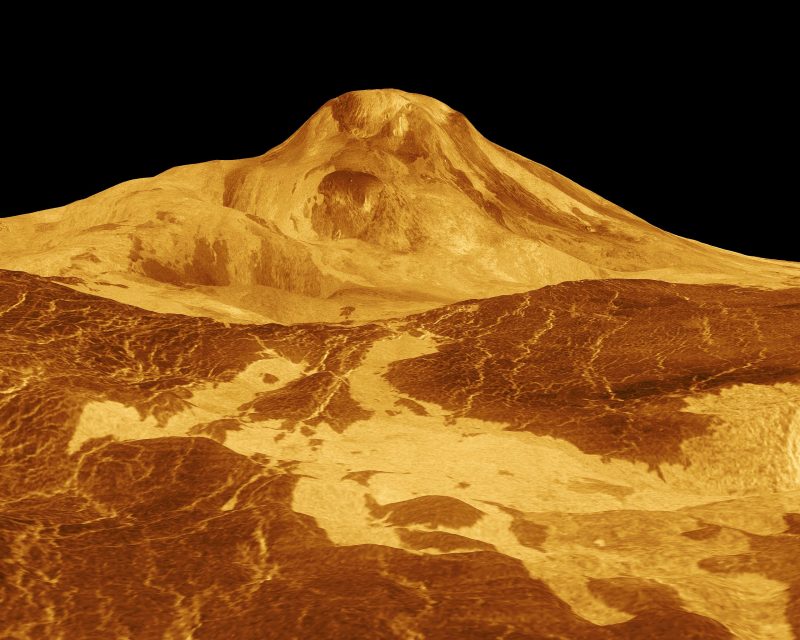 Perspective view of the Maat Mons volcano on Venus, based on radar images from Magellan. The volcano is 5 miles (8 km) tall. Image via PD/ USGOV/ NASA/ Wikipedia.

What about volcanism? Volcanism is very much intertwined with plate tectonics on Earth. We already know that Venus has many volcanoes, but are any of them still active? There is currently tentative evidence of still-active volcanoes on Venus, but it is not completely confirmed yet. VERITAS could help do that. Jennifer Whitten, a VERITAS science team member at Tulane University in New Orleans, said:

Determining whether Venus is actively undergoing volcanic activity and understanding what process is driving it is one of the really exciting questions I’d love to see answered.

VERITAS would be able to look for hotspots from active eruptions using its spectrometer, and the radar could detect active faulting, which would be evidence for current tectonic activity. The spectrometer could also detect rocks that had been formed from hot magma, before the chemical composition of the rocks had been altered by the corrosive atmosphere. Knowing how geologically active Venus still is, or isn’t, would also help scientists figure out how much water is in the interior of the planet.

Venus’ geology, plate tectonics in particular, is also important to understand in terms of habitability. The planet’s surface may be extremely inhospitable now, but it wasn’t always like that. Plate tectonics and volcanism have played a major role in Earth’s habitability, where plate tectonics help keep the long-term climate stable (apart from human-caused climate change). Volcanism releases volatiles into the atmosphere, while subduction recycles them back into the planet’s interior. This continuous cycle keeps the atmosphere in balance. The composition of both the atmosphere and oceans is affected by the formation and erosion of the continents, which provide the necessary nutrients for life.

To unwrap the mysteries of Venus we have to look under the hood at Venus’ interior; it is the engine for global geologic and atmospheric evolution. Are Venus and Earth fundamentally unique worlds? Or are the differences between these ‘twins’ only cosmetic? Answering this question is key to understanding what makes other rocky planets habitable and, ultimately, emerge with life.

The last spacecraft to study Venus’ surface from orbit was Magellan, whose mission ended in 1994. If it does get selected as a mission, VERITAS will revolutionize our understanding of how Venus formed and evolved, and why our sister planet changed so dramatically from a habitable world to one that could just as well have been forged in hell itself.

Bottom line: The proposed VERITAS mission would study the complex geology of Venus.