Cool! Here’s how Venus would look as a water world

A new map created by a Reddit user – based on what we know about the highs and lows on Venus’ surface – shows what this neighboring, cloud-shrouded, blazing hot planet might look like with oceans. Wow! 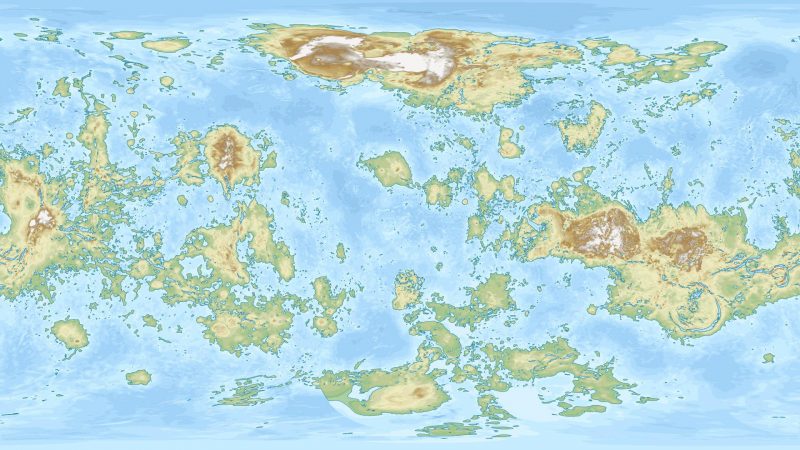 It’s hot enough on the surface of Venus to melt lead. There are also crushing surface pressures and clouds full of sulfuric acid. So there’s no water on the surface of Venus today. This planet – orbiting next-inward from Earth around the sun – is one of the most inhospitable places in our solar system. But scientists think that, a few billion years ago, Venus might have had oceans, perhaps much like those on Earth. Venus might once have been habitable. Even now, some have suggested terraforming Venus, so that it could become a water world once again in the future. What would Venus look like with water? Mathematician and data scientist Alexis Huet originally posted the map above online in 2014. It was re-posted on August 20, 2020 by Dragonite-2 on the MapPorn subreddit. It portrays Venus if it were terraformed to become a more Earth-like world, with a similar amount of water to Earth.

The map has now gone viral.

How accurate is it? And what does it show?

Venus is covered with dense clouds. So we can’t see its surface. But radar – from spacecraft orbiting this world, or (in the early days) from Earth – can penetrate the planet’s clouds and has let scientists make maps of the highs and lows on Venus’ surface. That’s why Venus has a known topography, which Huet used originally to create his map of Venus as a water world. Radar images show us Venus’ mountain ranges, volcanoes, quasi-continental formations and other, flatter regions.

Thus, we’ve known – and now Alexis Huet and Dragonite-2 have helped us see – that if Venus had an Earth-like quantity of water, it would have one large continent in its northern hemisphere. Scientists have named this continent already; they call it Ishtar Terra. It’s about the size of Australia. The highest point on Venus, the mountain Maxwell Montes, is located on Ishtar Terra. There’s also a second large continent – which scientists call Aphrodite Terra – located along the equator of Venus. It’s the size of South America (if South America were stretched out along Earth’s equator, instead of running perpendicular to it). Huet’s map also illustrates smaller continents and islands that would be scattered throughout Venus’ global oceans, if Venus were a water world. 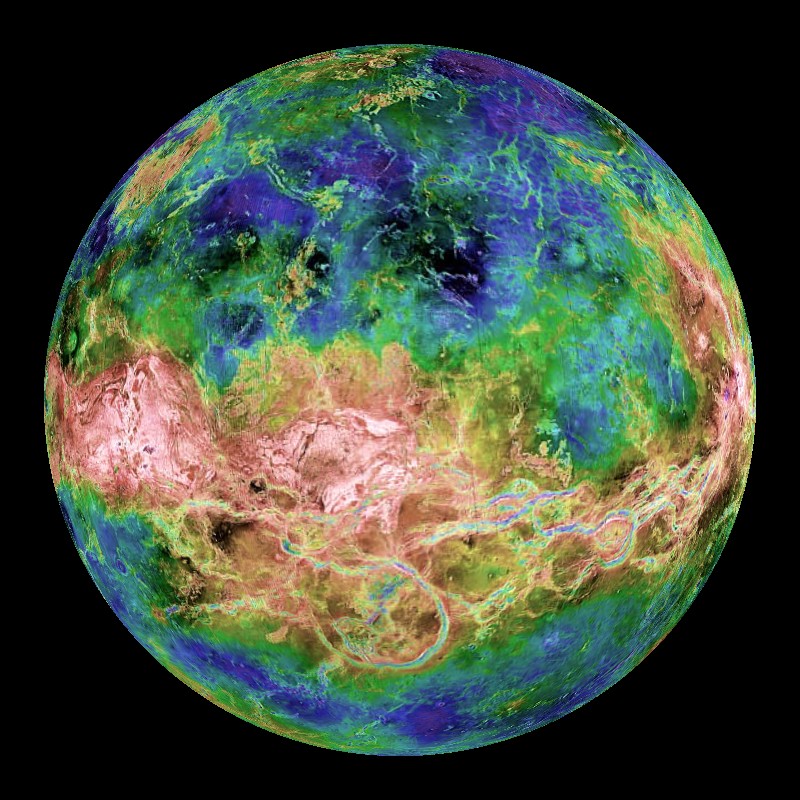 Alexis Huet’s map posted to Reddit is based on spacecraft data. Most of our information about what lies beneath the dense clouds of Venus was obtained by the Soviet space probe missions Venera 15 and 16 and by the American Pioneer Venus and Magellan spacecraft during the period 1978 to 1994. Today we have good information about 98% of the surface of Venus, according to this page from ESO. This map comes from NOAA’s Science on a Sphere. It’s a compilation of Venus radar data, showing Venus’ topography as it’s known today. NOAA wrote: “Most of Venus appears to be covered with gently rolling plains. Two areas rise up above the rest of the surface and are referred to as ‘continents.'” 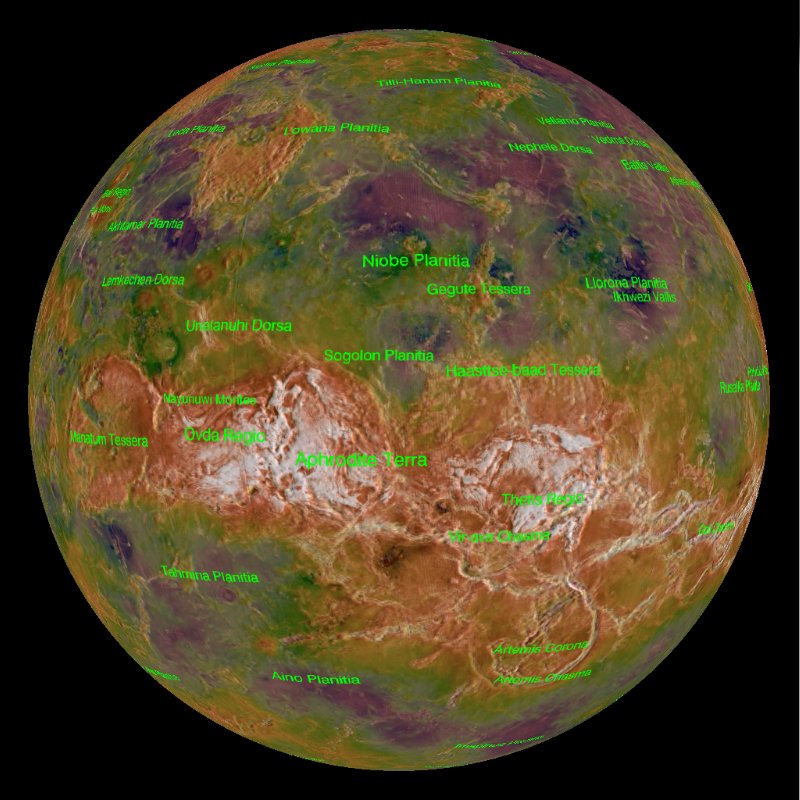 This map of Venus is also via NOAA’s Science on a Sphere. It shows some named features on Venus today, as revealed by radar imaging.

Writing in Inverse on August 29, 2020, Mike Brown described the new Venus-as-water-world map. He quoted an associate professor of planetary sciences at North Carolina State University – Paul Byrne – who told Brown that, in one sense, the map is fairly accurate:

… in that someone has taken the real-world digital elevation model for Venus and added a ‘sea level’ to it.

I don’t know how realistic the ‘if Venus had as much water as Earth’ part is, but I’m guessing that whoever made this map picked an average ocean depth for Earth and ‘flooded’ the Venus topography to that same depth.

However, as Byrne also noted to Brown, the surface would look quite different after erosion by rainfall, rivers and lakes. The map portrays Venus’ surface as-is, without plate tectonics. But a planet with oceans likely would have plate tectonics – the gradual movement of land plates on the planet’s crust, relative to one another – just as Earth does.

And that movement of crustal plates would, of course, affect the configuration of continents and islands. 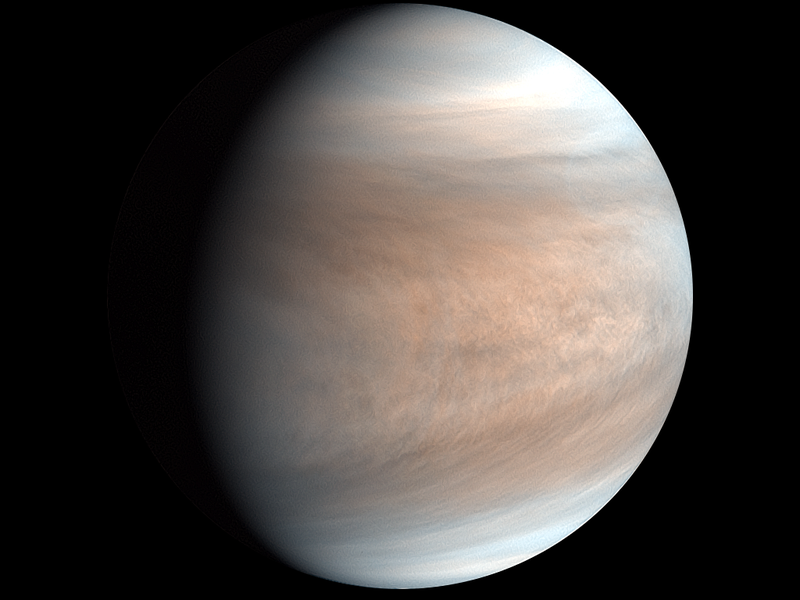 Venus as seen in enhanced color by Japan’s Akatsuki spacecraft. Its surface cannot be seen with the eye alone. It’s completely covered with dense clouds. There’s a wonderful article about real images of Venus via Japan’s Akatsuki spacecraft, at the Planetary Society blog. Akatsuki began orbiting Venus in 2015. The images were put through special processing and released in 2018. 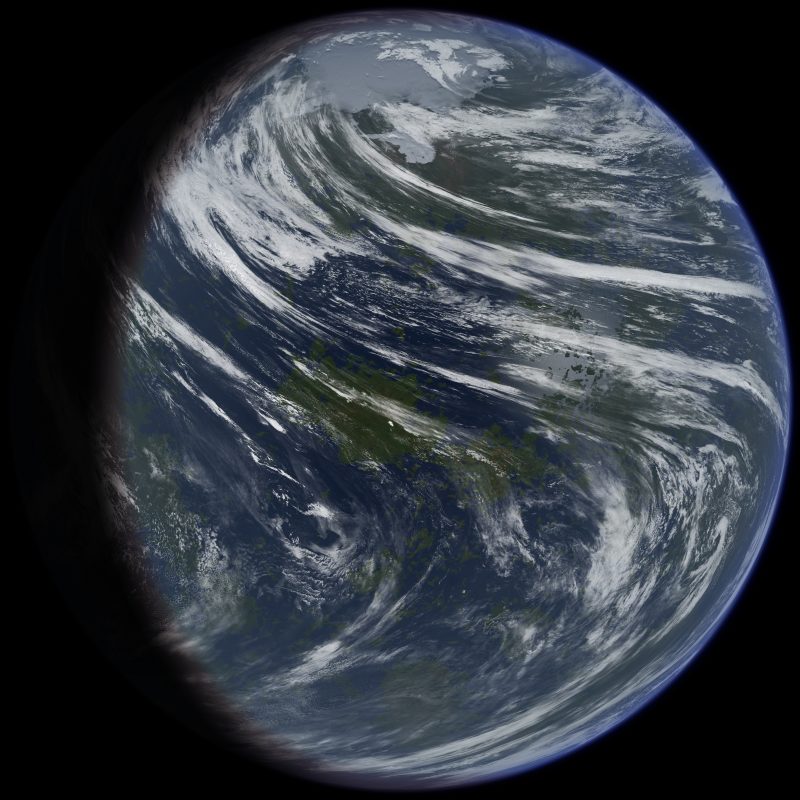 Artist’s concept of what a terraformed Venus might look like, with Earth-like oceans, continents and clouds. Image via Ittiz/ Wikimedia Commons.

But, of course, in another sense, the map of Venus as a water world doesn’t compute under current real-world conditions. As planetary scientist Byrne noted in the Inverse article:

In reality, it’s not remotely realistic.

That’s because of the extreme conditions that exist on Venus today. A watery ocean can’t exist on a world that’s hot enough to melt lead. So the map isn’t accurate in terms of the real planet Venus now. And now is what this map shows. See the contradiction?

Still, Huet’s map helps us use our imaginations and cast our minds back in time – or forward into the future – when, according to some visionaries, Venus might be a very different place. Byrne was speaking of the past Venus when he said:

Although a Venus with oceans wouldn’t look much like the Reddit image, it is fun to think about what a blue Venus might once have looked like, and why its climate turned into the hellish world it is today.

And we can imagine Venus as a terraformed world, purposely made to be more habitable and Earth-like again. This is a well-known concept for Mars, to transform the dry, cold planet back into a habitable one. Despite the fact that Mars is the most Earthlike world in our solar system, terraforming Mars would be difficult, according to most experts.

But terraforming Venus – a world the same size and density as Earth, but not remotely like Earth on its surface – would be even more difficult.

That hasn’t stopped some people from thinking about it, though. The famed astronomer Carl Sagan was one of the first to propose ways to terraform Venus, back in 1961. Sagan had suggested seeding Venus’ clouds with algae; later, it was determined that wouldn’t work because the atmosphere was found to be too thick. Astronomer Geoffrey Landis mentioned Sagan’s ideas, and the history of terraforming in general, in a paper from 2011.

Below is a short video animation depicting how the surface of Venus might look during a gradual transformation back into a water world:

Of course, the biggest hurdle in terraforming Venus would be in trying to reverse the runaway greenhouse effect that caused the planet to heat up to the extreme temperatures we see today. That wouldn’t be easy. It would require huge amounts of energy and advanced technology. But a terraformed Venus might have some advantages over a terraformed Mars, according to Paul Byrne. As Byrne points out, Venus is almost the same size as Earth, with similar gravity, and it might be easier to remove carbon dioxide – which makes up most of the planet’s atmosphere and causes the greenhouse effect – from its atmosphere to cool the planet, than to add gases to Mars’ thin atmosphere to warm it. Byrne commented:

If we were to terraform anywhere, then I’d pick Venus over Mars. But, to be clear: it’s going to be orders of magnitude more achievable to stop f%#&ing up our own climate here on Earth than trying to make anywhere else even remotely habitable for humans.

So – while Huet’s map in Reddit might not be all that accurate according to scientists – it does give us a reason to think. It provides an interesting glimpse at Venus as we’ve never known it, but which might have existed in the past. And – just maybe – it gives us a vision a world that might exist again in the future.

Not ready to stop thinking about maps and worlds made habitable via terraforming? Dragonite-2 posted another imaginary water-world map on the subreddit MapPorn, a few days after the Venus map. It’s also via Alexis Huet’s blog and is shared below. It shows what Earth’s moon would look like, if it were covered with water. Enjoy!

Via NOAA’s Science on a Sphere