Planetary trio has ended. Where do the planets go next?

Jupiter, Venus and Mercury are no longer within a 5-degree circle. But you can still see all three in the west after sunset for a few more days.

The planetary trio is now over, but you might still glimpse Jupiter as it drops into the sun’s glare. Meanwhile, Venus and Mercury are going to appear in the evening twilight sky throughout June.

The planetary trio – Jupiter, Venus, Mercury – has been an awesome sight in the west after sunset. A planetary trio is when three planets fit within a circle with a 5-degree, or smaller, diameter. Jupiter, Venus and Mercury met that definition of a planetary trio from May 24-29, 2013. They were even closer – about 3 degrees apart – on May 25, 26 and 27. May 26 was the closest grouping of these three planets until the year 2021. But the show is still going, and all three planets are still in the west after sunset through the first few days of June, when Jupiter will disappear in bright evening twilight, near the setting sun. Some called this late May 2013 event a triple conjunction, but a more fitting and descriptive name is planetary trio.

When and how do I look for the three planets?

Do I need any special equipment to see them?

How often do three planets appear together like this? 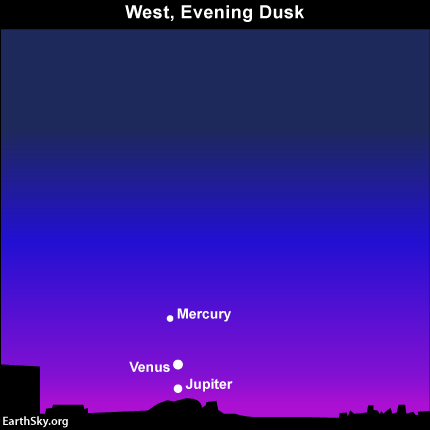 Jupiter, Venus and Mercury on May 29, 2013 … your last chance to see them within a 5-degree circle in Earth’s sky. 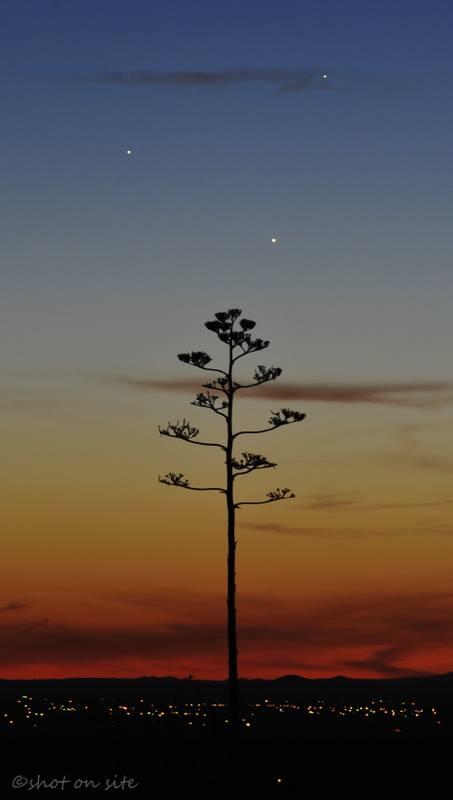 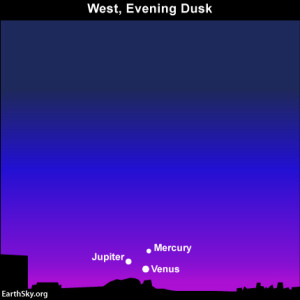 May 26 was the closest grouping of three planets until the year 2021.

When and how do I look for the three planets? Start looking just after the sun goes down, about 30 minutes after sunset. Jupiter is extremely low in the western twilight now. Mercury and Venus are higher up and easier to see. Still, trees or tall buildings may block them from view.

On May 24, Mercury passed Venus less than 2 degrees from Venus in right ascension. Around this time, the three planets began to look like a triangle in the twilight. Venus, Jupiter, and Mercury fit within a 5-degree circle from May 24-29.

On May 26, the triangle of Venus, Jupiter and Mercury were most compact, closer than you’ll see them again until 2021. Your thumb at arm’s length could cover them.

By May 27, the triangle was beginning to disperse, but …

On May 28, Venus passed Jupiter in right ascension, at a distance of 1 degree. The two brightest worlds 1 degree apart! It was an awesome sight.

Do I need any special equipment to see them? You can still see Venus ad Mercury. You might need binoculars to find Jupiter very low in the western twilight sky.

How about cameras and telescopes? Sure! If you have them, know how to use them and enjoy using them … give it a try. And if you get a good photo, please post it for all to see on EarthSky’s Facebook page, or at the EarthSky photo community on G+.

How often do three planets appear together like this? Seeing three planets so close together is fairly rare. It happened last in May 2011, and it won’t happen again until October 2015. This grouping was especially good because Venus and Jupiter are the brightest planets, and Mercury appears brighter, too, than most stars. The planetary trio was visible even in places with heavy urban light pollution.

In 2015, there will be another true triple conjunction, this time between the planets Venus and Jupiter (July 1, July 31, October 26).

But a triple conjunction was not what was happening in late May. Instead, there were three separate planetary conjunctions in late May, over a few days: 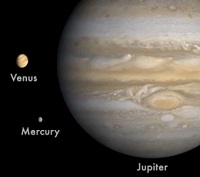 If all three planets had the same right ascension at once … wow! That’d definitely be a very cool triple conjunction. But I can’t recall that happening in my four decades of watching the sky. No idea how often it occurs, if ever.

Meanwhile, Jean Meeus of Belgium, recognized as a world authority in spherical and mathematical astronomy, has defined the term planetary trio as when three planets fit within a circle with a minimum diameter smaller than 5 degrees. All three planets met Meeus’ definition of a planetary trio from May 24-29, 2013. And they were even closer – all be about 3 degrees apart – as evening dusk fell on May 25, 26 and 27.

Bottom line: Jupiter, Venus and Mercury are no longer within a circle whose diameter is less than 5 degrees wide on the sky’s dome. That 5-degree circle of planets describes a planetary trio, and these were a most compact grouping on May 26, closer than we’ll see them again until 2021. After this, Jupiter will drop into the sun’s glare, vanishing in bright twilight in early June. Meanwhile, both Venus and Mercury will remain in the evening twilight sky throughout June.

Details on May 25 planetary trio

Details on May 27 planetary trio