A fourth solar flare from Sunspot 1283!

None of these flares is expected to travel directly toward Earth. NASA computer models suggest that the September 7 CME might give a glancing blow to Earth on the morning of September 11, and might create some auroras, or northern lights, for those at northerly latitudes.

Check out the animated image below. It shows a coronal mass ejection (CME) associated with the September 7 X-flare, traveling to Earth over the next few days. Earth is a yellow dot on the right half of this image. See how the flare delivers its glancing blow to Earth?

This extremely cool animation shows how the September 7, 2011, CME will move during the next few days, just glancing off Earth. Whoa! Credit: NASA/Space Weather Services

THURSDAY, SEPTEMBER 8, 2011, 6 A.M. CDT (11 UTC). After a lull in solar activity for the past several weeks, the sun has produced not one but three solar flares – two X-class flares, the strongest category. The likelihood is high for auroras at high latitudes on Earth in the coming days, especially around the morning of September 11, NASA says. 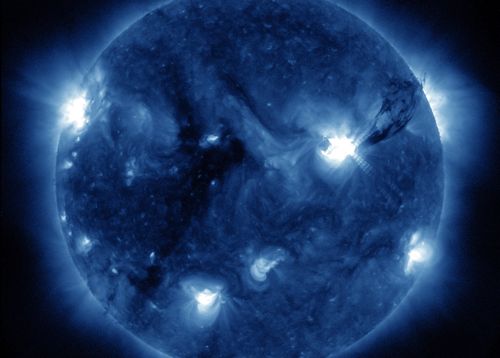 … produced a bright flash of extreme UV radiation and hurled an inky-dark plume of plasma into space.

All three flares were associated with coronal mass ejections (CME) – eruptions of giant clouds of material from the sun – that are headed in Earth’s direction but will not hit us squarely. NASA says:

A large CME can contain a billion tons of matter that can be accelerated to several million miles per hour in a spectacular explosion. Solar material streams out through the interplanetary medium, impacting any planet or spacecraft in its path.

Solar flares can affect Earth’s ionosphere and cause radio blackouts. An X2.1 flare has the potential to cause a “strong” radio blackout, categorized as R3, which could cause about an hour-long blackout, NASA says. However, although the CMEs are traveling in Earth’s general direction, they will not hit us squarely to cause the sort of damage that might be possible otherwise. It’s thought they will graze the northern edge of Earth’s atmosphere, causing little harm.

CMEs typically reach Earth one to five days after the eruption from the sun. So experts are not expecting effects to our technology, but they are saying these flares might cause auroras at northern latitudes. Aurora alert for the next few days! Spaceweather.com reports that September has already been a good month for seeing the northern lights at high latitudes:

With the midnight sun doing a late-summer fade, many Arctic sky watchers are seeing auroras for the first time in months. 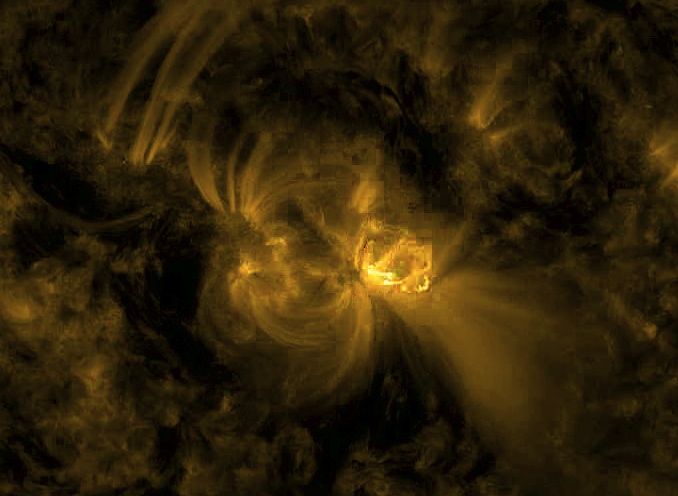 Will I see an aurora? Maybe. NASA says your best bet is to look – preferably in a dark sky and preferably at latitudes like those in the northern U.S. or Canada – on the morning of September 11.

Will the solar flares cause electrical grid failures and radio blackouts? Not likely. These events on our sun have the potential to disrupt electric power grids. Changes in Earth’s ionosphere caused by these events can interfere with high-frequency radio communications and global positioning system (GPS) navigation. But models suggest the recent solar flares will not cause those effects on Earth this time.

Are solar flares dangerous to humans? No, not if we are on Earth’s surface. Earth’s atmosphere protects us from solar flares. The sun has been producing solar flares throughout its 4.5-billion-year lifetime, and we humans evolved on Earth as solar flares waxed and waned on the sun’s surface, just as they do today. However, humans in space – above the protective blanket of Earth’s atmosphere – are affected by solar activity and need special protection from these events.

Bottom line: The sun produced four solar flares and three coronal mass ejections from September 6 to September 8, 2011. The strongest is an X2.1 class solar flare that peaked on September 6 at 6:20 p.m. EDT (22:20 UTC). The solar flares are not expected to have negative impacts on Earthly technology. Experts are calling for possible auroras at high latitudes on Earth around September 8-11. NASA says the greatest possibility for auroras might be the morning of September 11.