The sun emitted an X6.9 or X7 flare on August 9, 2011. X-flares are the biggest flares. Some radio blackouts might occur. Aurora alert in the next few days.

According to NASA, the sun released an X-class solar flare in Earth’s direction earlier today (August 9, 2011). The NOAA GOES satellite saw and measured the X6.9 flare – or X7 flare according to some media reports. No harm to humans is expected, but a flare this strong can sometimes disrupt Earth’s atmosphere and disrupt GPS and communications signals. NASA says today’s flare might be strong enough to cause some radio communication blackouts. Those living at northerly latitudes can expect to see auroras in the coming days.

The sun released the flare at 7:48 UTC (3:48 a.m. EDT) on August 9. Although the gigantic bursts of radiation from the sun cannot pass through Earth’s atmosphere to harm humans on the ground, it might be strong enough to affect humans in space, if they do not protect themselves. 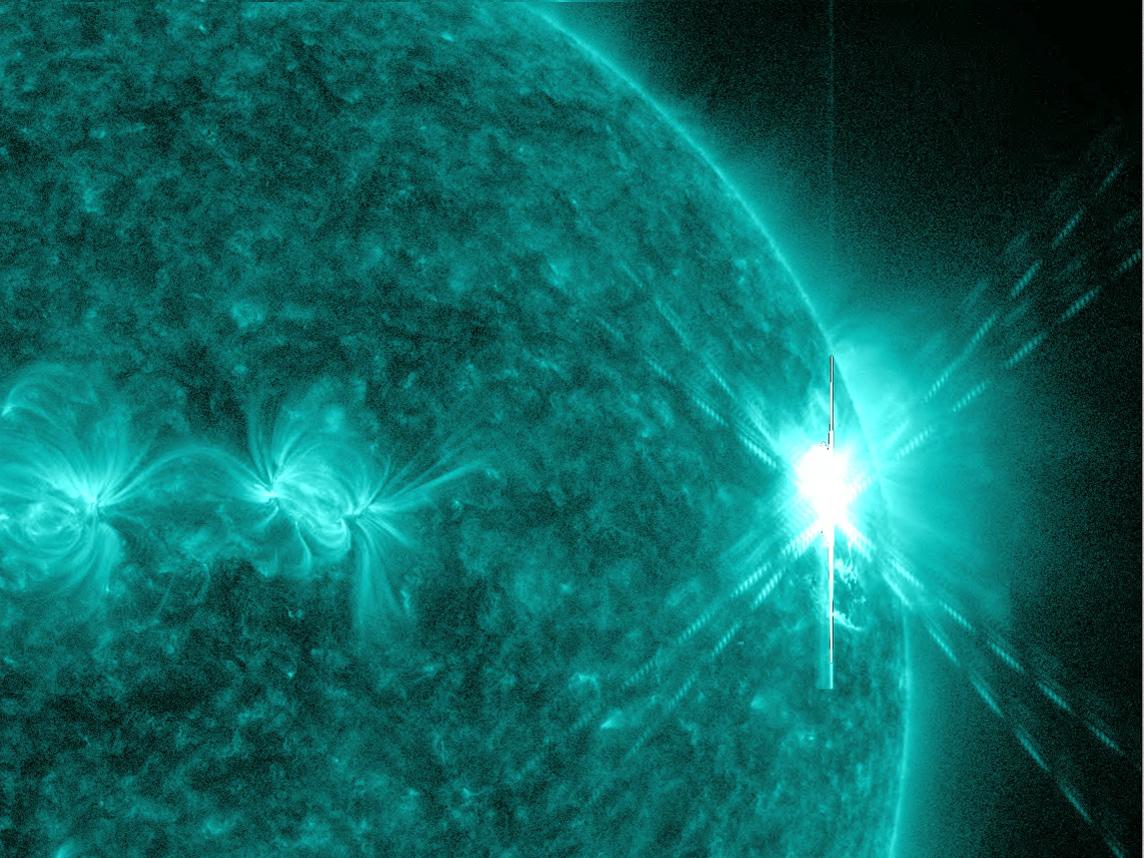 Solar physicists classify solar flares according to their strength. The biggest flares are the “X-class flares,” like the one earlier today. The smallest ones are A-class (near background levels), followed by B, C, M and X. Similar to the Richter scale for earthquakes, each letter represents a 10-fold increase in energy output. So an X is 10 times an M and 100 times a C. Within each letter class there is a finer scale from 1 to 9.

X-class flares can go higher than 9, within this finer scale. That’s because, although X is the last letter, there are flares more than 10 times the power of an X1. The most powerful flare measured with modern methods was in 2003, during the last solar maximum – the last time the sun was near a peak of activity. The 2003 X-class flare was much stronger than today’s flare. It was so powerful that it overloaded the sensors measuring it. The sensors cut out at X28.

Activity on the sun comes and goes on an 11-year cycle, and the sun is now nearing its peak activity, according to scientists. The peak in solar activity is expected in 2013. In other words, big solar flares – like the X-class flare earlier today – will be more common during the coming years. These flares cause no damage to humans on Earth, and most solar flares cause only minor problems with satellites and power grids.

For skywatchers, a solar flare means the auroras at Earth’s poles – the beautiful northern and southern lights – will be active. So heads up in the next few days, if you live at a northerly latitude.

Bottom line: The sun emitted an X6.9 – or X7 – flare on August 9, 2011. X-flares are the biggest flares according to scientists’ classification system. It is possible that some radio blackouts will occur. Those at northerly latitudes should look for auroral displays in the next several days.