A second supersized black hole has been discovered at the heart of a nearby galaxy – Markarian 739 – already known to be sporting one.

A study using NASA’s Swift satellite and the Chandra X-ray Observatory has found a second supersized black hole at the heart of a nearby galaxy, already known to be sporting one. The galaxy – Markarian 739 or NGC 3758 – lies 425 million light-years away toward the constellation Leo. Only about 11,000 light-years separate the two cores, each of which contains a black hole gorging on infalling gas. The study will appear in a forthcoming issue of The Astrophysical Journal Letters.

The animation below begins with a visible light view of Markarian 739 and transitions into an artistic rendering of the two black holes.

At the hearts of most large galaxies, including our own Milky Way, lies a supermassive black hole weighing millions of times the sun’s mass. Some of them radiate billions of times as much energy as the sun.

Astronomers refer to galaxy centers exhibiting such intense emission as active galactic nuclei (AGN). Yet as common as monster black holes are, only about one percent of them are currently powerful AGN. Binary AGN are rarer still: Markarian 739 is only the second identified within half a billion light-years.

Many scientists think that disruptive events like galaxy collisions trigger galactic nuclei to switch on by sending large amounts of gas toward the black hole. As the gas spirals inward, it becomes extremely hot and radiates huge amounts of energy. 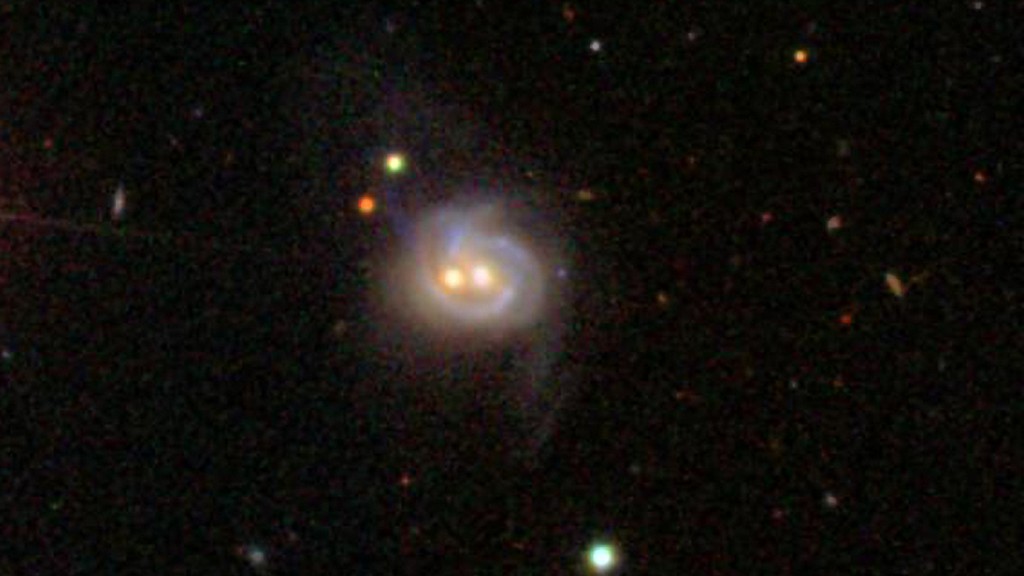 Viewed in visible light, Markarian 739 resembles a smiling face, with a pair of bright cores underscored by an arcing spiral arm. The object is really a pair of merging galaxies. Data from Swift and Chandra reveal the western core (right) to be a previously unknown AGN; past studies already had identified an AGN in the eastern core. The two supermassive black holes are separated by about 11,000 light-years. The galaxy is 425 million light-years away. Image Credit: SDSS

Since 2004, the Burst Alert Telescope (BAT) aboard Swift has been mapping high-energy X-ray sources all around the sky. The survey is sensitive to AGN up to 650 million light-years away, and has uncovered dozens of previously unrecognized systems. Follow-up studies by Koss and colleagues published in 2010 reveal that about a quarter of the Swift BAT AGN were either interacting or in close pairs, with perhaps 60 percent of them poised to merge in another billion years.

If two galaxies collide and each possesses a supermassive black hole, there should be times when both black holes switch on as AGN. We weren’t seeing many double AGN, so we turned to Chandra for help.

Swift’s BAT instrument is scanning one-tenth of the sky at any given moment, its X-ray survey growing more sensitive every year as its exposure increases. Where Swift’s BAT provided a wide-angle view, the X-ray telescope aboard the Chandra X-ray Observatory acted like a zoom lens and resolved details a hundred times smaller. 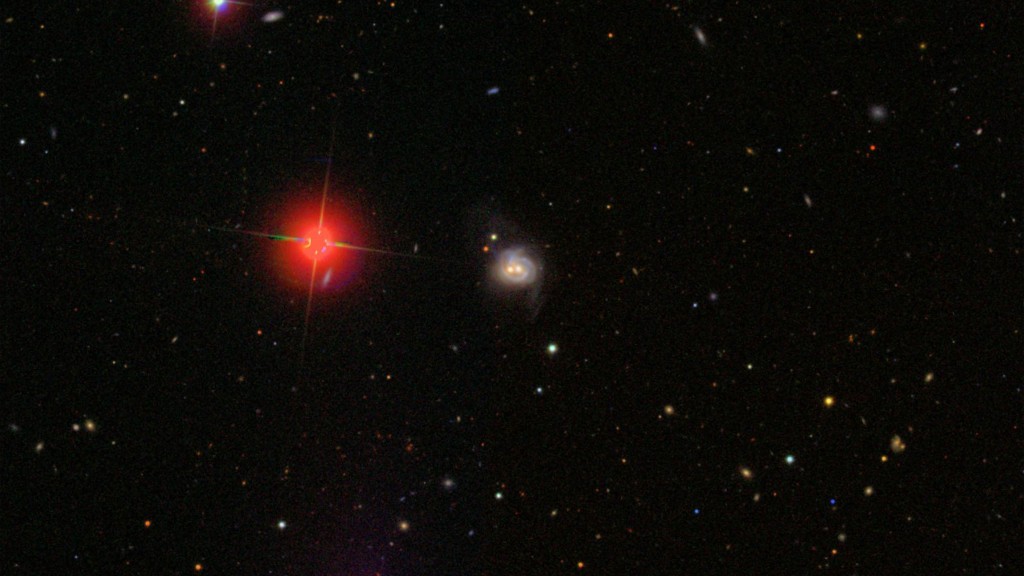 For decades, astronomers have known that the eastern (left) nucleus of Markarian 739 contains a black hole that is actively accreting matter and generating prodigious energy. The Chandra study shows that its western (right) neighbor is, too. This makes the galaxy one of the nearest and clearest cases of a binary AGN.

How did the second AGN remain hidden for so long? Co-author Sylvain Veilleux, a professor of astronomy at UMCP, said:

Markarian 739 West shows no evidence of being an AGN in visible, ultraviolet and radio observations. This highlights the critical importance of high-resolution observations at high X-ray energies in locating binary AGN.

Summary: Astronomers have found a second supersized black hole at the heart of an unusual nearby galaxy already known to have one. The galaxy – Markarian 739 or NGC 3758 – lies 425 million light-years away toward the constellation Leo. The study, which used NASA’s Swift satellite and the Chandra X-ray Observatory, will appear in a forthcoming issue of The Astrophysical Journal Letters.