A new study suggests that many exoplanets – worlds orbiting distant stars – might have an overabundance of toxic gases in their atmospheres. If so, that would make the evolution of complex life forms more difficult.

Artist’s concept of the 7 known Earth-sized planets in the TRAPPIST-1 system. Three of those planets are in the habitable zone, but we don’t yet know what kinds of gases are in the planets’ atmospheres. Image via R. Hurt/NASA/JPL-Caltech/UC Riverside.

How common is life in the universe? We still don’t know the answer, but continued research seems to suggest that there should be many planets (and moons) out there capable of supporting some form of biology. But what about advanced life, in particular? A new study suggests that the number of worlds with more highly evolved, complex life forms might be fewer than some people hope.

The peer-reviewed findings come from researchers at the University of California Riverside (UCR), and indicate that many planets may have a buildup of toxic gases in their atmospheres that would make it difficult for more advanced life to evolve. These results were published in The Astrophysical Journal on June 10, 2019.

According to Timothy Lyons, a biogeochemist at UCR:

This is the first time the physiological limits of life on Earth have been considered to predict the distribution of complex life elsewhere in the universe.

The research has implications for the “habitable zone,” the region around a star where temperatures could allow liquid water to exist on the surface of a rocky planet. High levels of toxic gases could narrow down that zone or even eliminate it in some cases. As Lyons explained: 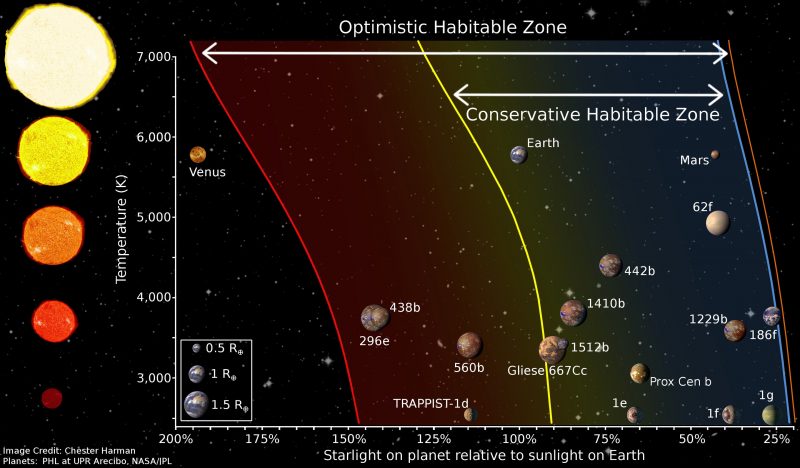 Diagram depicting the boundaries of the traditional habitable zone, along with star types and some known exoplanet examples. Image via Chester Harman/ Wikipedia/ CC BY-SA 4.0.

The researchers used computer models to study atmospheric climate and photochemistry in a variety of planetary conditions. One of the most potently dangerous gases is carbon dioxide. Planets far out from their star – including Earth – need it to maintain temperatures above freezing, since it is a great greenhouse gas.

But there’s a catch for planets farther out from their stars than Earth. They would require more carbon dioxide to keep temperatures warm, but too much of the gas can be deadly to more advanced lifeforms such as animals and people. As Edward Schwieterman, the study’s lead author, noted:

To sustain liquid water at the outer edge of the conventional habitable zone, a planet would need tens of thousands of times more carbon dioxide than Earth has today. That’s far beyond the levels known to be toxic to human and animal life on Earth.

For simpler animal life, that kind of carbon dioxide level can shrink the traditional habitable zone down to about half. For more evolved animals or humans, the habitable zone is reduced to less than one third. 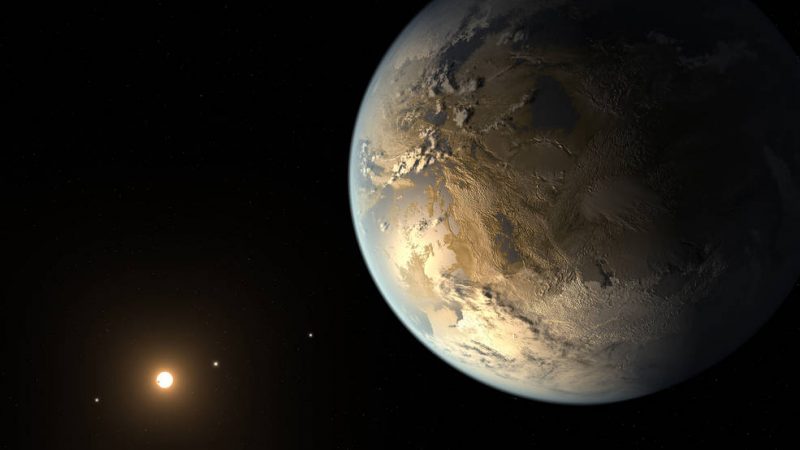 Artist’s concept of Kepler-186f, the first Earth-sized exoplanet to be discovered orbiting in the habitable zone of its star. Such worlds may be able to support life, but toxic gases could limit how far that life can evolve. Image via NASA Ames/SETI Institute/JPL-Caltech/Astronomy.

Another deadly gas is carbon monoxide. There isn’t much of it on Earth because the sun creates chemical reactions in the atmosphere that destroy it. But for some planets that orbit red dwarf stars – smaller and cooler than the sun – the intense ultraviolet radiation can create toxic levels of carbon monoxide in their atmospheres. As Schwieterman said:

These would certainly not be good places for human or animal life as we know it on Earth.

The same researchers, however, did note earlier that microbial life might fare well in such an environment.

So how can we determine which exoplanets might be suitable for life and which ones are likely not, due to factors such as toxic gases? The only way to do that currently is to remotely study their atmospheres with telescopes. As Christopher Reinhard, another co-author of the new paper, said:

Our discoveries provide one way to decide which of these myriad planets we should observe in more detail. We could identify otherwise habitable planets with carbon dioxide or carbon monoxide levels that are likely too high to support complex life.

As might be expected, the easiest kind of life to detect would be that which lives on the planet’s surface and modifies its atmosphere, as on Earth. If a planet has life only in the subsurface (as may be the case with Mars or ocean moons like Europa and Enceladus), that would a lot harder to find, especially from many light-years away. If there were very advanced life, as in a civilization as developed or more so than humanity, they might be detected by their technosignatures or other effects on the environment of the planet. But advanced life requires favorable planetary conditions.

On Earth, carbon dioxide is essential for plant life, which absorbs it from the air, and then combines it with water and light to make carbohydrates, the process known as photosynthesis. But too much carbon dioxide can be deadly to more complex life forms. Image via Jason Samfield/Flickr/CC BY-NC-SA/The Conversation.

The new study can help to set limits on what kind of life may evolve depending on the toxicity of their planets’ atmospheres. It is also a reminder of how precious our own planet is, which is brimming with life of many incredibly diverse forms. As noted by Schwieterman:

I think showing how rare and special our planet is only enhances the case for protecting it. As far as we know, Earth is the only planet in the universe that can sustain human life.

Bottom line: While we don’t yet know how common, or not, life may be in the universe, determining which planets have abundant toxic gases in their atmospheres will help narrow down the search, in particular for more complex kinds of life reminiscent of those on Earth.