A new study of data from NASA’s bountiful Cassini mission shows that Titan’s largest methane sea, Kraken Mare, is at least 1,000 feet – 300 meters – deep near its center. That’s plenty of room for a future robotic submarine to explore. 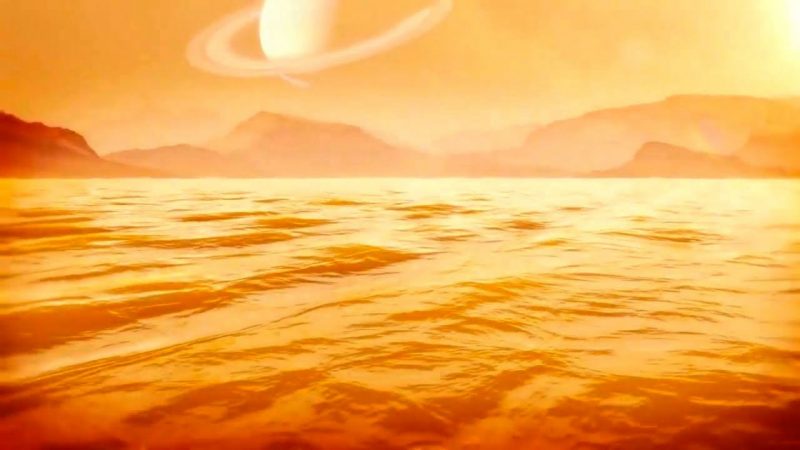 Artist’s concept of Kraken Mare, the largest methane lake or sea on Saturn’s large moon Titan. This moon is the only known body in space, besides Earth, known to have stable bodies of liquid (albeit not water) on its surface. Image via Cornell University/ NASA.

Earth is a water planet. Titan – Saturn’s largest moon – is the only other body in our solar system, in fact the only other body we know, anywhere, to have liquids on its surface. Titan has rain, rivers and even lakes and seas, not made of water, but instead composed of liquid methane (the primary constituent of natural gas) and ethane. Some of Titan’s lakes and seas have significant depth, too, and now a new study announced by researchers at Cornell University shows that Titan’s largest sea is at least 1,000 feet – 300 meters – deep in its center. As the researchers pointed out, that’s:

… enough room for a potential robotic submarine to explore.

The new peer-reviewed findings were published in the Journal of Geophysical Research on December 4, 2020.

The results come from the study of data from the Cassini mission, which orbited Saturn, weaving among its moons, from 2004 to 2017. The new research is based primarily on data from one of the probe’s last flybys of Titan. The depth of all the lakes and seas had been estimated, except for one: Kraken Mare, the largest Titanian sea. As outlined in the paper:

From 2013 to 2017, we have been probing the depth of Titan’s methane-dominated seas by penetrating the liquid with Cassini’s radar altimeter. The depth and composition of each of the seas had already been derived, except for Titan’s largest sea Kraken Mare. Herein, we describe the final observation of this campaign before the end of Cassini in 2017.

The depth and composition of each of Titan’s seas had already been measured, except for Titan’s largest sea, Kraken Mare, which not only has a great name [it’s named for a legendary sea monster], but also contains about 80% of the moon’s surface liquids. 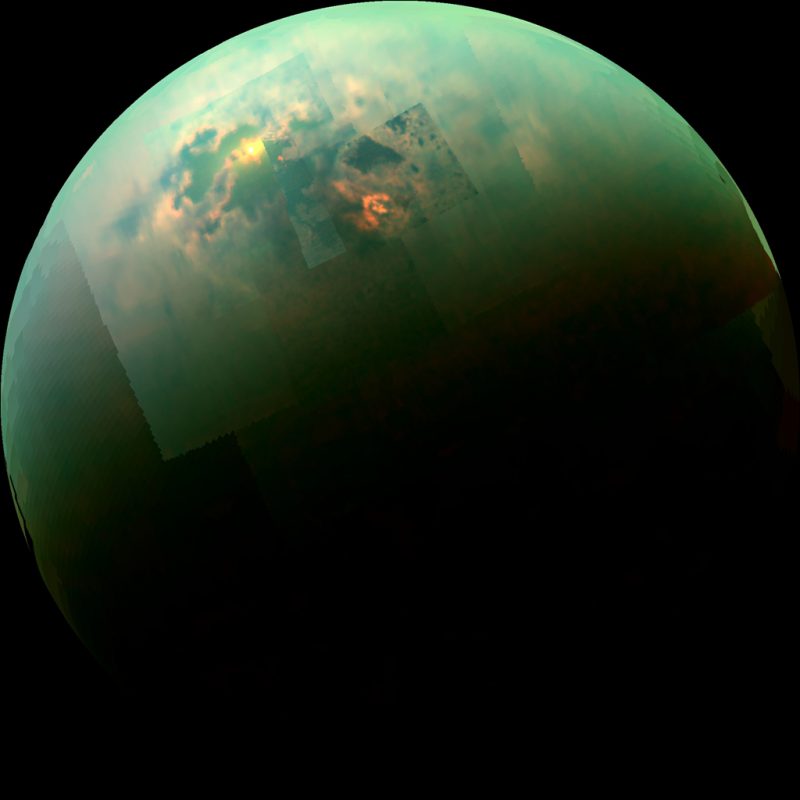 Cassini acquired this infrared view of seas and lakes in Titan’s northern hemisphere in 2014. Sunlight can be seen glinting off the southern part of Titan’s largest sea, Kraken Mare. This alien sea is almost as large as all 5 of the Great Lakes in North America, combined. Image via NASA/ JPL-Caltech/ University of Arizona/ University of Idaho.

The initial data about Kraken Mare had been obtained by Cassini on August 21, 2014, during the T104 flyby. Cassini used its radar from an altitude of nearly 600 miles (nearly 1,000 km), to observe Ligeia Mare (a smaller sea near Titan’s North Pole), Kraken Mare and Moray Sinus, an estuary at the northern end of Kraken Mare.

Moray Sinus was found to be about 280 feet (85 meters) deep, but the central part of Kraken Mare was too deep for the radar to measure all the way to the bottom.

The composition of Kraken Mare, however – mostly methane with ethane mixed in – provided clues. If it was similar to that of Moray Sinus, as would be expected, then data analysis indicated that the central part of Kraken Mare must be at least 328 feet (100 meters) deep and probably closer to 1,000 feet (305 meters). 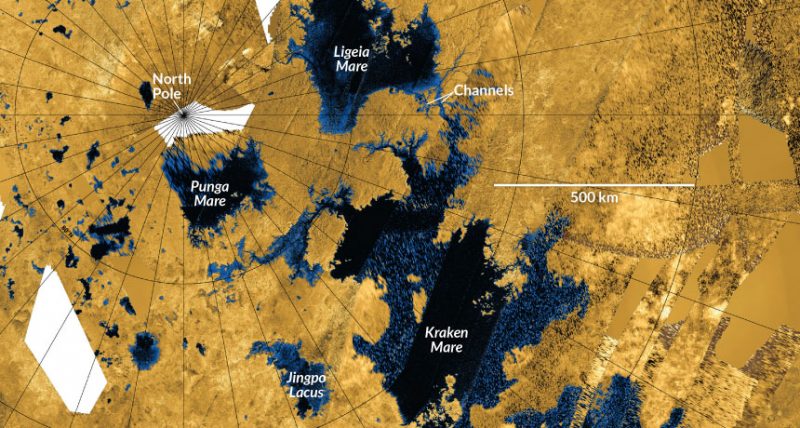 Radar map from Cassini showing Kraken Mare and other nearby seas and lakes on Titan. Image via JPL-Caltech/ NASA/ ASI/ USGS/ Science News. 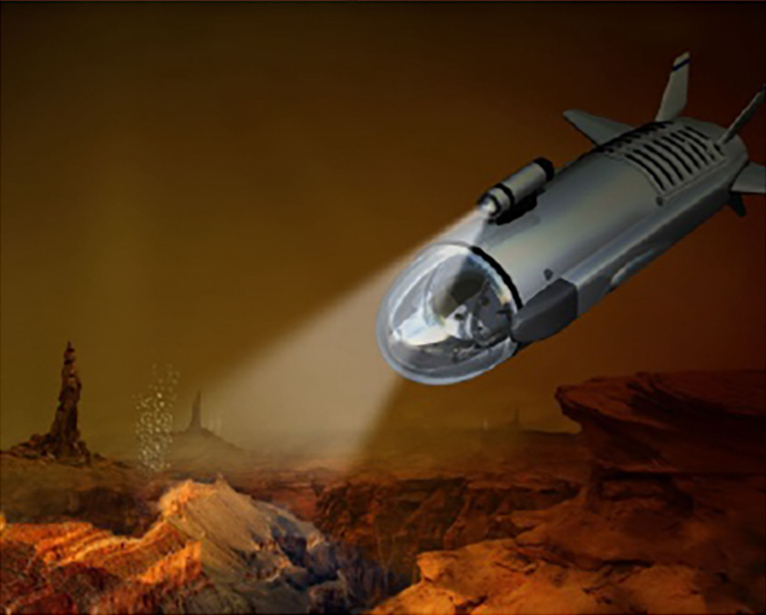 At some point in the future, NASA wants to send a submarine, called Titan Sub, to explore Kraken Mare. What might it find? Artist’s concept via NASA.

Kraken Mare is also huge in terms of size, almost as large as all five of the Great Lakes in North America, combined.

In this context, to understand the depth and composition of Kraken Mare and the Moray Sinus is important because this enables a more precise assessment of Titan’s methane hydrology. Still, we have to solve many mysteries.

Now about the potential for a future submarine exploring the depths of Titan’s largest sea. It’s an idea for the future, but maybe this study will bring it closer. Scientists have suggested sending a submarine-like probe – tentatively called Titan Sub – to investigate Kraken Mare firsthand. Imagine actually exploring an alien sea? How cool would that be? As Poggiali noted, this data will be valuable in planning for such a mission:

Thanks to our measurements, scientists can now infer the density of the liquid with higher precision, and consequently better calibrate the sonar aboard the vessel and understand the sea’s directional flows.

Scientists think that Titan is similar to what the early Earth was like, around the time when life was just starting to evolve. It could, therefore, provide valuable data about how life originated on Earth, or at least prebiotic chemistry. 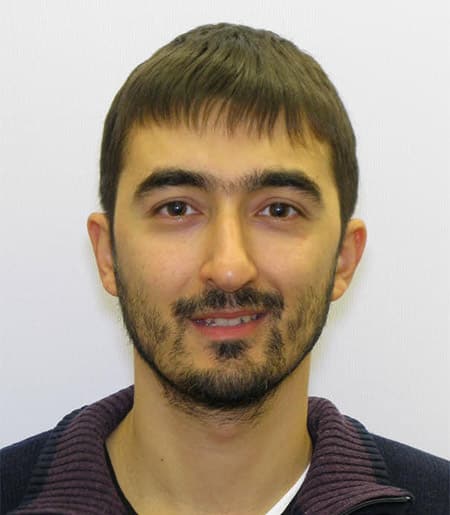 So, could there be anything living in those lakes and seas? It’s an exciting thought, but it would have to be a form of life, even if just microscopic, unlike any on Earth, using methane instead of water to survive. Titan’s atmosphere is mostly nitrogen, like Earth’s, but the moon is extremely cold on the surface – about -290 degrees Fahrenheit (-179 degrees Celsius) – which is why its hydrology is based on liquid methane and ethane instead of water. On Titan, water ice is as hard as rock.

There’ve also been suggestions of a water ocean below Titan’s surface, similar to those thought to exist on Jupiter’s moon Europa and Saturn’s moon Enceladus, but, if it exists, little is known about it so far.

Source: The Bathymetry of Moray Sinus at Titan’s Kraken Mare