Check out this cool video map of known exoplanets

This short video, just over a minute long, takes you on a journey from 1991, when no exoplanets were known, to today’s 4,003+ known exoplanets. Why the plus? According to the NASA Exoplanet Archive, the number of known exoplanets has already jumped up to 4,031 and counting!

Astronomers have discovered more than 4,000 exoplanets – planets orbiting other stars – so far, with a lot more waiting for confirmation. Now, NASA has published a cool new video “summary” of the findings, a time-lapse map if you will, of the locations of these distant worlds in our galaxy. The video was produced by SYSTEM Sounds (Matt Russo, Andrew Santaguida), using the NASA Exoplanet Archive. It was posted to YouTube on July 7, 2019, by NASA’s APOD Videos and it ran as an Astronomy Picture of the Day on July 10.

Even though the video is short, just over a minute long, it takes the viewer on a time-lapse, condensed journey from 1991, when no exoplanets were known, to today, with more than 4,003 known exoplanets. More than? Yes. According to the NASA Exoplanet Archive the number is now at 4,031, so the map is already outdated! The map not only shows the planets’ locations, but also color-codes them based on what method they were discovered with, whether by radial velocity, transit, imaging or microlensing. What starts as an empty background becomes a galaxy filled with planets. And those are only the ones we know about so far.

It’s hard to think back to before the early 1990s, when astronomers believed exoplanets existed, but had not found a single one in outer space. Now we know of thousands, and scientists estimate that there are billions in our galaxy alone. When you combine that with the fact that there are at least 100 billion known galaxies, the total numbers of likely exoplanets becomes mind-boggling to contemplate.

The Kepler Space Telescope alone has confirmed 2,345 exoplanets, with another 2,420 awaiting confirmation. The Kepler mission has ended, but there are still tons of data to be analyzed, and many more worlds to be confirmed. Kepler revolutionized our knowledge of exoplanets, revealing a wide variety of worlds. Many are rocky planets like Earth, while others are like mini-Neptunes, and others are gas giants like Jupiter, extremely hot because they’re orbiting so close to their stars. Smaller rocky planets and planets that are gaseous but smaller than Neptune actually appear to be the most common exoplanets, at least from what we know so far, which is encouraging for the search for life elsewhere.

TESS – Transiting Exoplanet Survey Satellite – is the newest space telescope dedicated to planet-hunting, and already has confirmed an additional 24 planets plus 993 additional candidates so far, as listed on the NASA Exoplanet Archive. One advantage that TESS has is that is observing stars that are closer to us than the ones that Kepler looked at. That means those planets will be easier targets for follow-up observations, including by upcoming space telescopes such as the James Webb Space Telescope (JWST) , which can better analyze those planets’ atmospheres. By studying the atmospheres, scientists can search for evidence of biosignatures, gases in the atmosphere that may be produced by living organisms. On Earth, that would include oxygen and methane, although there are ways those gases can be created without life as well. Certain combinations of such gases, though, would more likely have a biological origin. 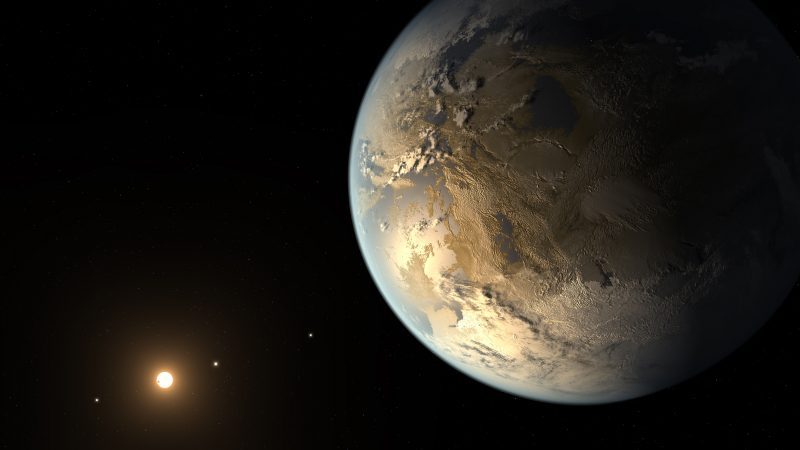 Artist’s concept of Kepler-186f, the first Earth-sized exoplanet found orbiting in the habitable zone of its star. A growing number of such worlds have been found in recent years. Image via NASA Ames/JPL-Caltech/T. Pyle. 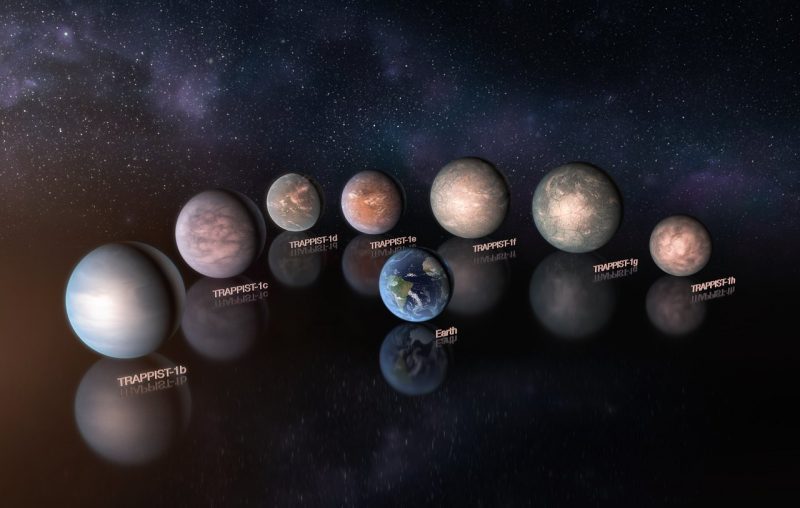 Artist’s concept of seven Earth-sized worlds in the TRAPPIST-1 planetary system. TRAPPIST-1e is one of the closest rocky planets orbiting a red dwarf star that may be able to support life. Image via ESO.

Of course, beyond just finding out how many planets might be out there, people mostly want to know how many exoplanets might be habitable, or better yet, actually inhabited by some form of life. The search for biosignatures is one way to try to determine if a given planet has life. At the other end of the spectrum, a highly advanced alien civilization might make its presence known through megastructures such as Dyson spheres or other technosignatures.

We haven’t yet found any unambiguous evidence for alien life on any exoplanets, but we may be getting closer. Extrapolating from what has been discovered so far, rocky worlds like Earth are now thought to be some of the most common in our galaxy. That is an exciting development in itself. This includes some super-Earths, which are larger than Earth but smaller than Neptune. Some of those planets have been found in the habitable zones of their stars, like Earth is, where temperatures could allow liquid water on their surfaces (depending on other variable factors). Other super-Earths are thought to be true water-worlds, completely covered by oceans.

What seems certain is that this map will continue to grow in the years ahead, with thousands more exoplanets expected to be discovered by TESS and other upcoming planet-hunting missions. 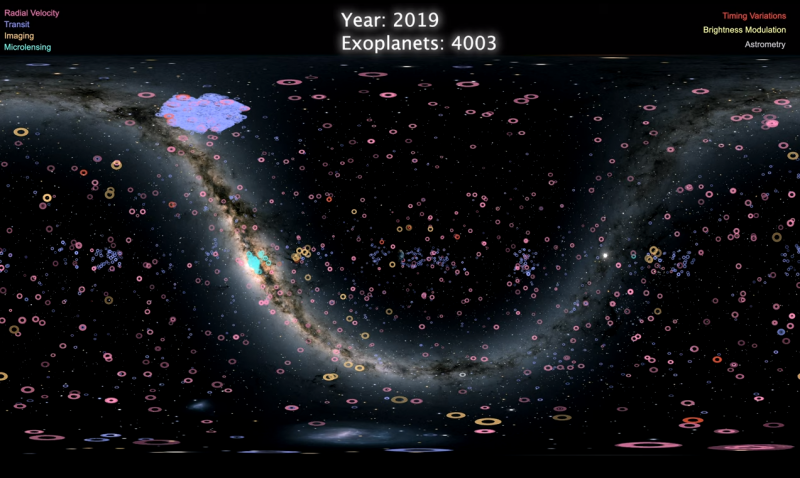 Here’s the new map of known exoplanets, or planets orbiting distant suns. It’s all 4,003 known exoplanets discovered as of 2019. This image was an Astronomy Picture of the Day for July 10, 2019. Image via NASA/APOD.

Bottom line: This cool new time-lapse video map by SYSTEM Sounds (M. Russo, A. Santaguida) – using the NASA Exoplanet Archive – shows all of the exoplanets discovered so far, from 1991 to the present.