Thud of Philae landing on comet

Take 2 seconds to listen to a sound made 311 million miles away.

Today, German scientists released a two-second recording of the sound the Rosetta mission’s Philae lander made when it touched down on comet 67P/Churyumov-Gerasimenko’s icy surface. Philae landed on the comet, which is about 311 million miles (500 million kilometers) from Earth, last week (November 12, 2014).

The sound comes from sensors embedded in Philae’s three legs. The recording is part of SESAME, the Surface Electric Sounding and Acoustic Monitoring Experiment. Because its harpoons didn’t fire, Philae actually ended up bouncing twice and landing three times. This is a recording of the first bounce.

Scientists from the German Aerospace Center, DLR, which is responsible for SESAME, are analyzing the sound of the landing for clues about the comet’s surface.

After nearly 57 hours on Comet 67P/Churyumov–Gerasimenko, the Philae lander had completed its main science mission on November 15, 2014, when its batteries failed and the lander went silent. Read more. 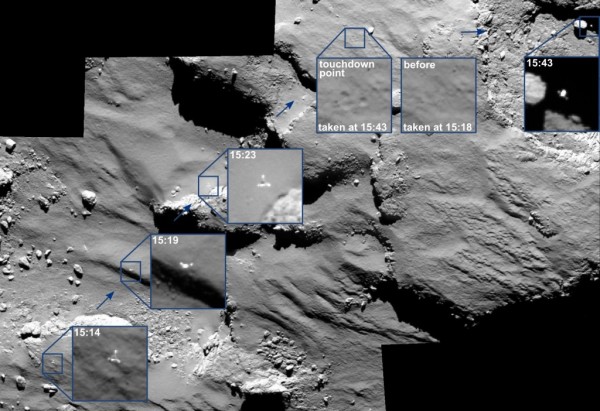 Philae’s bounce across the surface of its comet, as captured by the Rosetta mothership. Image via ESA/Rosetta/MPS for OSIRIS Team MPS/UPD/LAM/IAA/SSO/INTA/UPM/DASP/IDA