It sounds unbelievable, but a new study from Kagoshima University and the National Astronomical Observatory of Japan says that exoplanets – thousands of them – could be orbiting supermassive black holes. 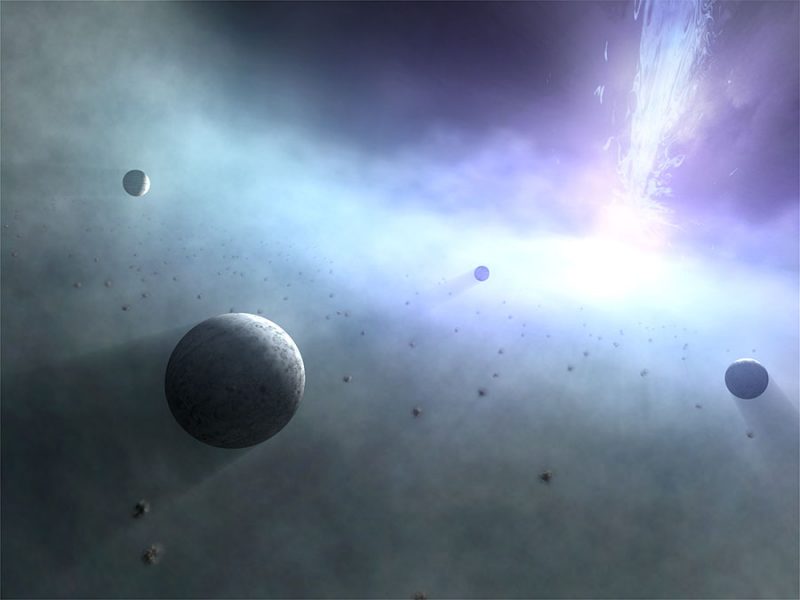 Artist’s concept of a black hole with its bright surrounding disk of gas and dust – and jets extending from its poles – plus many orbiting planets. Image via Kagoshima University /NAOJ.

Exoplanets – worlds orbiting other stars – are common, with billions estimated to exist in our galaxy alone. They’ve been found around all sorts of stars, including sunlike stars, red dwarfs and even pulsars. There also seem to be rogue planets, which don’t orbit any stars, but instead just wander lonely though interstellar space. And now a new study suggests there might be yet another entirely new class of planets, orbiting supermassive black holes.

The intriguing findings were announced by researchers at Kagoshima University and the National Astronomical Observatory of Japan on November 25, 2019. The new peer-reviewed study was published in The Astrophysical Journal on November 26, 2019.

It sounds like something out of science fiction, but according to the researchers, black holes that have massive disks of dust and gas surrounding them (called circumnuclear disks), just like protoplanetary disks around young stars, could produce planets – a lot of them –  just like the disks around stars. Supermassive black holes (SMBHs) could have thousands of planets orbiting them, the researchers say. Although orbiting the black hole, the planets would likely be a long way from the black hole itself, around 10 light-years. From the paper:

As a natural consequence of the elementary processes of dust growth, we discovered that a new class of planets can be formed around supermassive black holes (SMBHs). We investigated a growth path from submicron sized icy dust monomers to Earth-sized bodies outside the “snow line,” located several parsecs from SMBHs in low luminosity active galactic nuclei (AGNs). 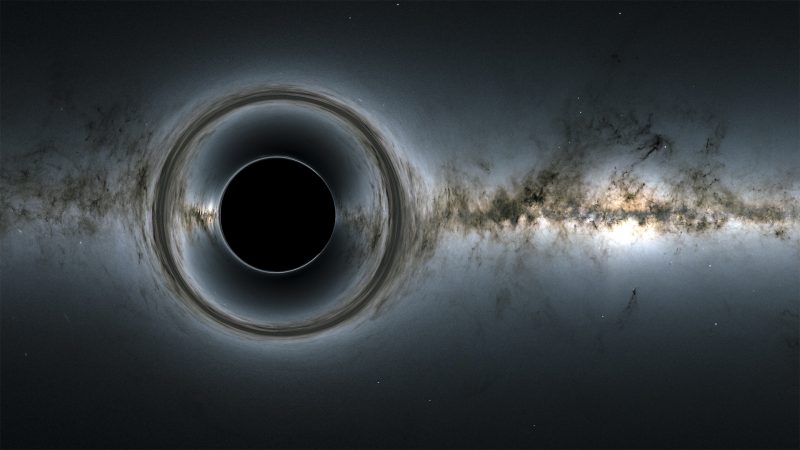 As Keiichi Wada, a professor at Kagoshima University, said in a statement:

With the right conditions, planets could be formed even in harsh environments, such as around a black hole.

Eiichiro Kokubo, a professor at the National Astronomical Observatory of Japan, said:

Our calculations show that tens of thousands of planets with 10 times the mass of the Earth could be formed around 10 light-years from a black hole. Around black holes there might exist planetary systems of astonishing scale. 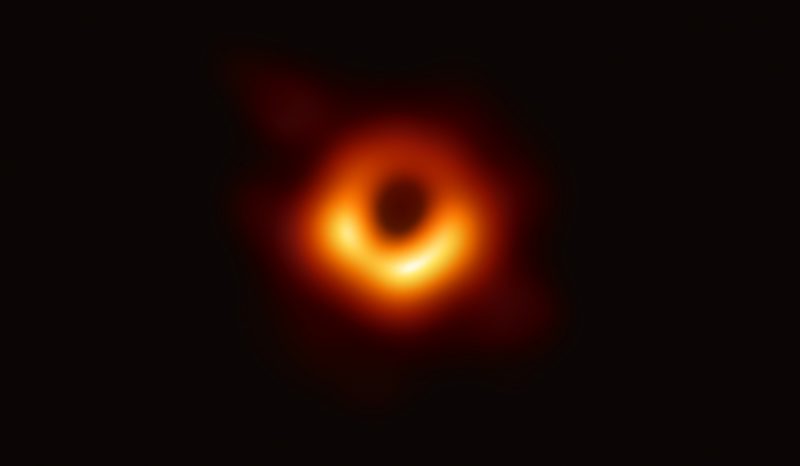 The amount of dust surrounding a supermassive black hole can be enormous, as much as a hundred thousand times the mass of our sun, or about a billion times more than in a typical protoplanetary disk.

How would planets form in such an environment?

In a disk around a black hole, the dust is so dense that it blocks radiation from the black hole itself. This allows temperatures cool enough for icy dust grains to stick together and aggregate, just like they do in protoplanetary disks around stars. The researchers calculated that planets could form in several hundred million years in this manner around black holes.

Such black hole planets can’t yet be directly detected with current telescopes, but the findings open up a tentative and fascinating new field of study. From the paper:

Observing planets around SMBHs should be challenging. The standard techniques to detect exoplanets around stars, i.e., Doppler spectroscopy, transit photometry, gravitational microlensing, or direct imaging are hopeless. Photometry by a hard X-ray interferometer in space might be a possible solution, but the occultation of the accretion disk by the “planets” would be hard to distinguish from the intrinsic time variability of AGNs. The other, indirect way is detecting spectral changes in the millimeter-wavelength due to opacity variation associated with the dust growth as used in the protoplanetary disk.

It’s already known that stars can also orbit black holes, such as the ones orbiting the supermassive black hole – called Sagittarius A* – at the center of our galaxy. 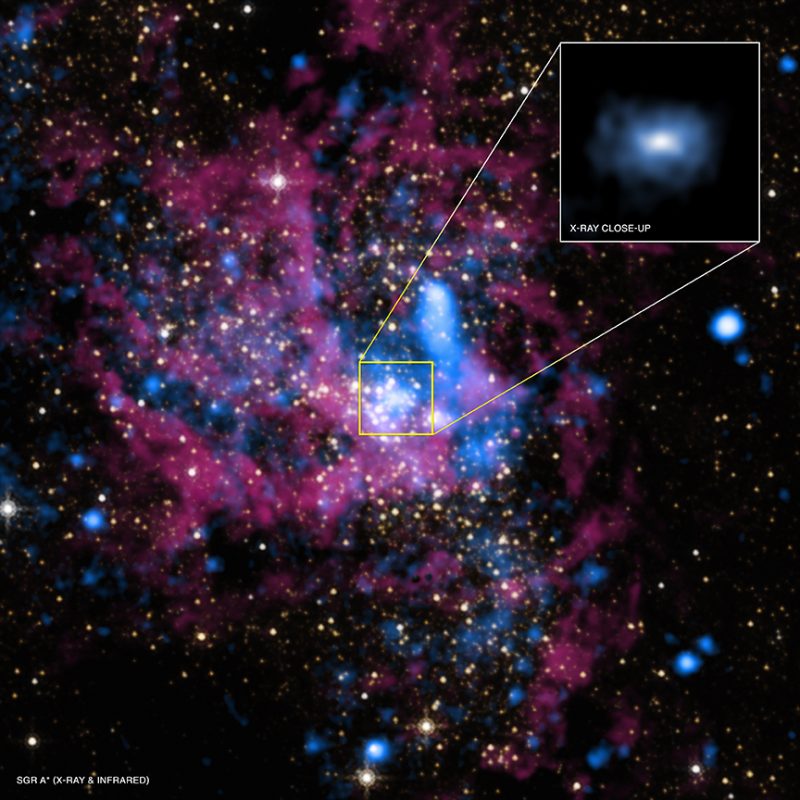 X-ray image of the center of our galaxy, where the supermassive black hole Sagittarius A* resides. Image via X-ray: NASA/UMass/D.Wang et al., IR: NASA/STScI.

Black holes aren’t really holes, but objects that have gravitational pulls so strong that nothing, not even light, can escape. The “surface” of a black hole, called the event horizon, is the boundary where the velocity needed to escape exceeds the speed of light. Matter and radiation fall in, but they can’t get out.

There are two main classes of black holes. Stellar-mass black holes are three to dozens of times the sun’s mass. The supermassive black holes already discussed are 100,000 to billions of solar masses, and are located in the centers of most large galaxies, including ours. There may also be intermediate-mass black holes, about 100 to more than 10,000 solar masses. There are candidates, but they have not yet been confirmed to exist.

Bottom line: Supermassive black holes could have thousands of exoplanets orbiting them, according to a new study from Japan.