Today in 2003: Opportunity blasts off to Mars

NASA’s Opportunity rover spent some 15 years exploring Mars. It surpassed all expectations for its endurance and longevity, to become one of the most successful planetary missions. Then it went silent. 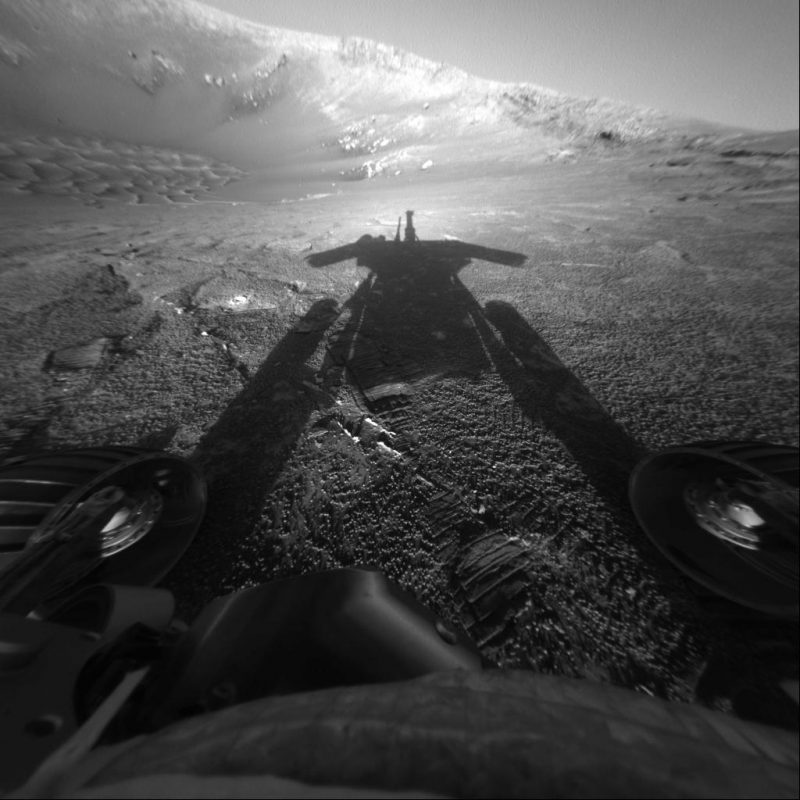 The dramatic image of NASA’s Mars Exploration Rover Opportunity’s shadow was taken on sol 180 (July 26, 2004) by the rover’s front hazard-avoidance camera as the rover moved farther into Endurance Crater in the Meridiani Planum region of Mars. Image via NASA/JPL-Caltech.

July 7, 2003. On this date, NASA’s Mars rover Opportunity blasted off on a journey to Mars. After traveling for some seven months through space, Opportunity landed on Mars’ Meridiani Planum on January 25, 2004, three weeks after its twin rover Spirit touched down on the other side of the planet. Spirit stopped moving across Mars’ surface in 2009, and it stopped sending back signals to Earth in 2010. Meanwhile, Opportunity – designed to last just 90 Martian days and travel 1,100 yards (1,000 meters) across Mars’ surface – vastly surpassed all expectations in its endurance, scientific value and longevity. It became one of the most successful feats of interplanetary exploration, effectively ending in 2018 (and officially ending in 2019) after some 15 years exploring the surface of Mars.

In addition to exceeding its life expectancy by 60 times, the rover traveled more than 28 miles (45 km) by the time it reached its most appropriate final resting spot in Mars’ Perseverance Valley. The Opportunity rover stopped communicating with Earth when a severe Mars-wide dust storm blanketed its location in June 2018. Presumably, the storm affected the rover’s solar panels. Opportunity’s final communication was received June 10, 2018.

A layer of dust covers Opportunity’s solar arrays following a dust storm in January 2014, left, but by March 2014 much of the dust had blown away. Image via NASA/JPL Caltech/Cornell/Arizona State.

But NASA didn’t know that yet. Throughout the late summer and fall of 2018, engineers in the Space Flight Operations Facility at NASA’s Jet Propulsion Laboratory (JPL) conducted a multifaceted, eight-month recovery strategy in an attempt to compel the rover to communicate. They sent more than a thousand commands to the rover … but there was no response. In what became a months-long outpouring of emotion, space fans on Twitter and other social media platforms began using the hashtags #ThankYouOppy and #GoodnightOppy.

Space engineers made their last attempt to revive Opportunity on February 12, 2019, starting with a “wake-up song” played in the control room at JPL. The mission’s principal investigator, Steve Squyres, had chosen I’ll Be Seeing You, as performed by Billie Holiday. At 8:10 p.m., Holiday’s wistful voice floated up from the command floor:

I’ll be seeing you in all the old familiar places that this heart of mine embraces.

As was expected by that time, those final efforts at communication were to no avail. Opportunity remained silent on the surface of Mars. Project manager John Callas told the crowd of NASA employees gathered for the farewell transmission:

This is a hard day. Even though it’s a machine and we’re saying goodbye, it’s still very hard and very poignant, but we had to do that. We came to that point. 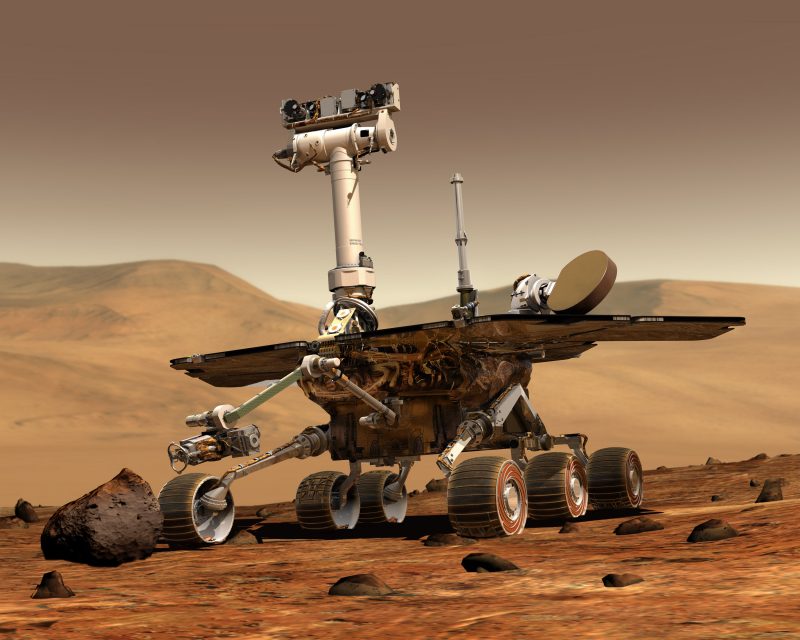 Artist’s concept of the Mars Opportunity rover. Image via NASA.

From the day Opportunity landed, a team of mission engineers, rover drivers and scientists on Earth collaborated to overcome challenges and get the rover from one geologic site on Mars to the next. They plotted workable avenues over rugged terrain so that the 384-pound (174-kilogram) Martian explorer could maneuver around and, at times, over rocks and boulders, climb gravel-strewn slopes as steep as 32 degrees (an off-Earth record), probe crater floors, summit hills and traverse possible dry riverbeds. Its final venture brought it to the western limb of Perseverance Valley. Opportunity’s achievements include:

– Setting a one-day Mars driving record March 20, 2005, when it traveled 721 feet (220 meters).
– Returning more than 217,000 images, including 15 360-degree color panoramas.
– Exposing the surfaces of 52 rocks to reveal fresh mineral surfaces for analysis and cleared 72 additional targets with a brush to prepare them for inspection with spectrometers and a microscopic imager.
– Finding hematite, a mineral that forms in water, at its landing site.
– Discovering strong indications at Endeavour Crater of the action of ancient water similar to the drinkable water of a pond or lake on Earth.

In the video below, Steve Squyres speaks about Opportunity’s mission and its significance

All those accomplishments were not without the occasional extraterrestrial impediment. In 2005 alone, Opportunity lost steering to one of its front wheels, a stuck heater threatened to severely limit the rover’s available power, and a Martian sand ripple almost trapped it for good. Two years later, a two-month dust storm imperiled the rover before relenting. In 2015, Opportunity lost use of its 256-megabyte flash memory and, in 2017, it lost steering to its other front wheel.

Each time the rover faced an obstacle, Opportunity’s team on Earth found and implemented a solution that enabled the rover to bounce back. However, the massive dust storm that took shape in the summer of 2018 proved too much for history’s most senior Mars explorer.

Mars exploration continues. NASA’s InSight lander, which touched down on November 26, 2018, is just beginning its scientific investigations. The Curiosity rover has been exploring Gale Crater for more than six years. And, NASA’s Mars 2020 rover and the European Space Agency’s ExoMars rover both will launch in July 2020, becoming the first rover missions designed to seek signs of past microbial life on the red planet. 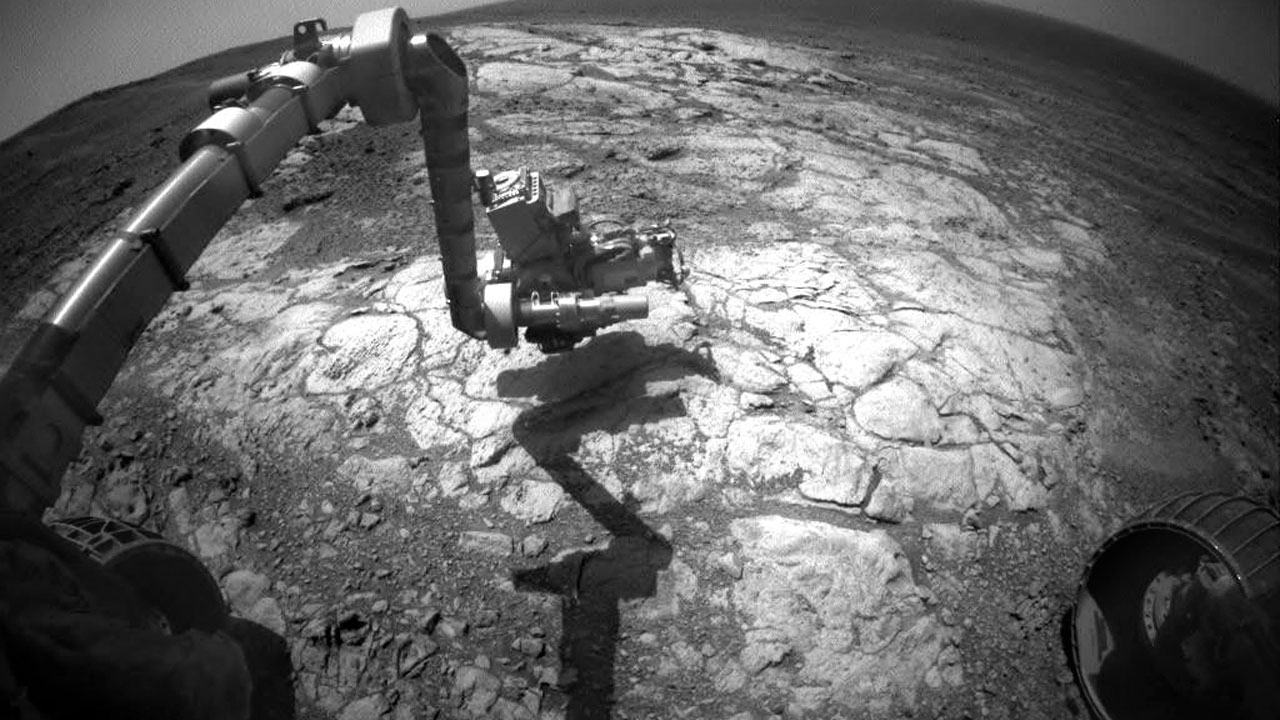 The Opportunity rover featured an array of scientific tools. One of its main objectives was the search for signs of water on the red planet, since, as far as we know, water is necessary for life. Image via NASA/JPL-Caltech/Cornell.