The storm is now officially “planet-encircling.” At Gale Crater, where the Curiosity rover is studying the storm’s effects, dust has starkly increased. Meanwhile, the Opportunity rover stays silent.

Two images from the Mast Camera (Mastcam) on NASA’s Curiosity rover depicting atmospheric changes since the regional Mars dust storm spread to become global and descended in earnest on Curiosity’s location in Gale Crater. The left image shows the Duluth drill site on May 21, 2018 (Sol 2058); the right image is the same site on June 17 (Sol 2084). Both images have been white balanced and contrast-enhanced. The reddening in the right image is due to Mars’ dust. Image via NASA/JPL-Caltech/MSSS.

It’s cool and comforting when nature does what you expect. And – much as the seasons on Earth change in a regular way – so seasonal dust storms are a feature of Mars’ orbit around the sun, occurring around the time the planet is closest to the sun (Mars’ perihelion, or closest point, comes about every two Earth-years and will come this year on September 16). Sometimes the dust storms remain regional, but not so with the storm seen to be raging on Mars since early June. Now the storm of tiny dust particles has engulfed much of Mars and is officially planet-encircling or global. NASA’s Opportunity rover had to suspend science operations early in the storm. Its solar panels must by now be blanketed with dust, and indeed – as of the latest NASA update on Opportunity – there is still no signal received from the rover. Across the planet, NASA’s Curiosity rover – which has been studying Martian soil at Gale Crater – is expected to remain largely unaffected by the dust since it runs on a nuclear-powered battery. Especially now that the storm has spread over Curiosity’s location, this rover is in a good position to study the ongoing Mars dust storm from the ground. NASA said on June 20:

Dust has steadily increased over Curiosity’s location, more than doubling over the weekend. The sunlight-blocking haze, called tau, is now above 8.0 at Gale Crater — the highest tau the mission has ever recorded. Tau was last measured near 11 over Opportunity, thick enough that accurate measurements are no longer possible for Mars’ oldest active rover.

For NASA’s human scientists watching from the ground, Curiosity offers an unprecedented window to answer some questions. One of the biggest is: why do some Martian dust storms last for months and grow massive, while others stay small and last only a week?

We don’t have any good idea.

Curiosity is now the only active rover on Mars’ surface, but otherwise a fleet of spacecraft – both NASA craft and from other countries – are in orbit around Mars. I’ve counted eight total current missions at Mars at Wikipedia’s list of missions to Mars page, with a ninth mission, Insight Mars, launched as recently as May 5 and heading for a November 2018 landing on Mars.

With all these earthly robots orbiting Mars, or creeping across its surface, NASA pointed out that this will be the first time we’ve been able to collect:

… a wealth of dust information both from the surface and from space. The last storm of global magnitude that enveloped Mars was in 2007, five years before Curiosity landed there.

Stay tuned! There’s likely to be more about the Mars dust storm ahead. 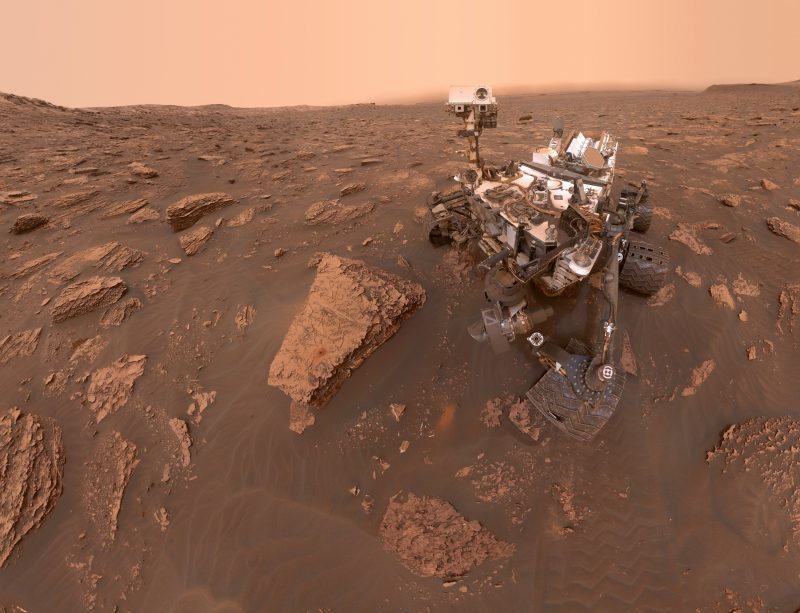 A self-portrait taken by NASA’s Curiosity rover taken on June 15, 2018 (Sol 2082). A Martian dust storm has reduced sunlight and visibility at the rover’s location in Gale Crater. In this image, Curiosity is facing the crater rim, about 18.6 miles (30 kilometers) away from where it stands inside the crater. Daily photos captured by its Mast Camera, or Mastcam, show the sky getting hazier. This sun-obstructing wall of haze isabout six to eight times thicker than normal for this time of season. Image via NASA/JPL-Caltech.

Bottom line: The dust storm raging on Mars has now officially become planet-encircling or global. The Curiosity rover – now the only active rover on Mars’ surface – is studying the Martian dust, which has spread to its location. Across the planet, the solar-powered Opportunity rover has gone silent. Look for updates on Opportunity here.