Mars’ massive dust storms have been challenging – and enticing – scientists for decades. From NASA, here’s the scoop on Martian dust. 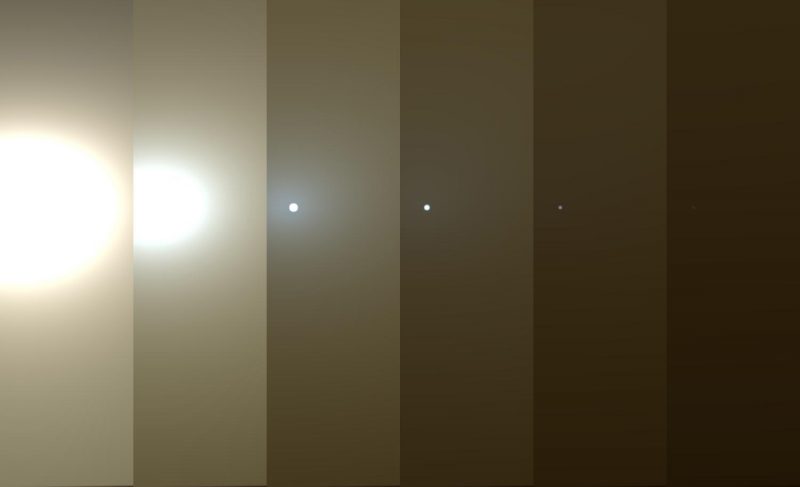 This series of images shows simulated views of a darkening Martian sky blotting out the sun from NASA’s Opportunity rover’s point of view, with the right side simulating Opportunity’s current view in the global dust storm (June 2018). The left starts with a blindingly bright mid-afternoon sky, with the sun appearing bigger because of brightness.

NASA’s Opportunity rover is facing one of the greatest challenges of its 14 1/2 year mission on the surface of Mars – a massive dust storm that has turned day to night. Opportunity is currently hunkered down on Mars near the center of a storm bigger than North America and Russia combined. The dust-induced darkness means the solar-powered rover can’t recharge its batteries. 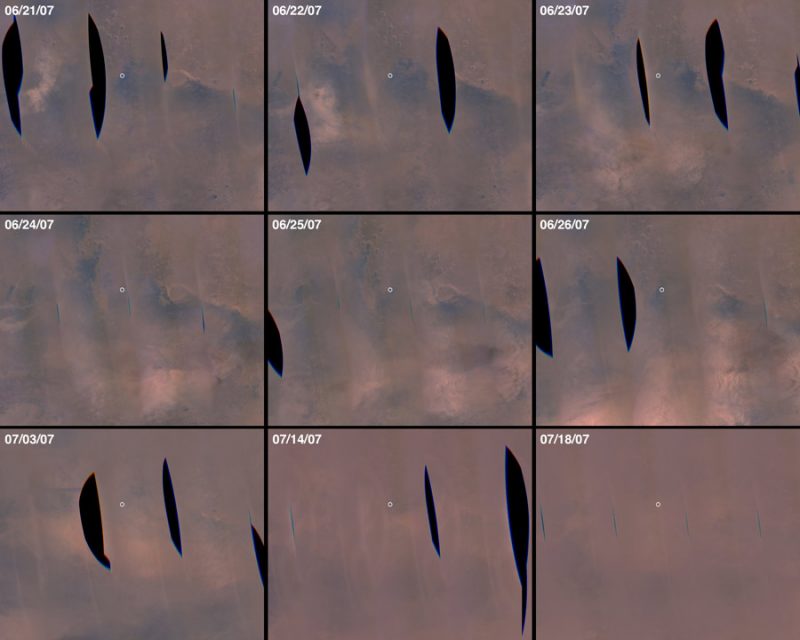 This isn’t the first time Opportunity has had to wait out a massive storm. In 2007, a monthlong series of severe storms filled the Martian skies with dust. Power levels reached critical lows, but engineers nursed the rover back to health when sunlight returned.

Martian breezes proved a saving grace for the solar-powered Mars rovers in the past, sweeping away accumulated dust and enabling rovers to recharge and get back to science. This is Opportunity in 2014. 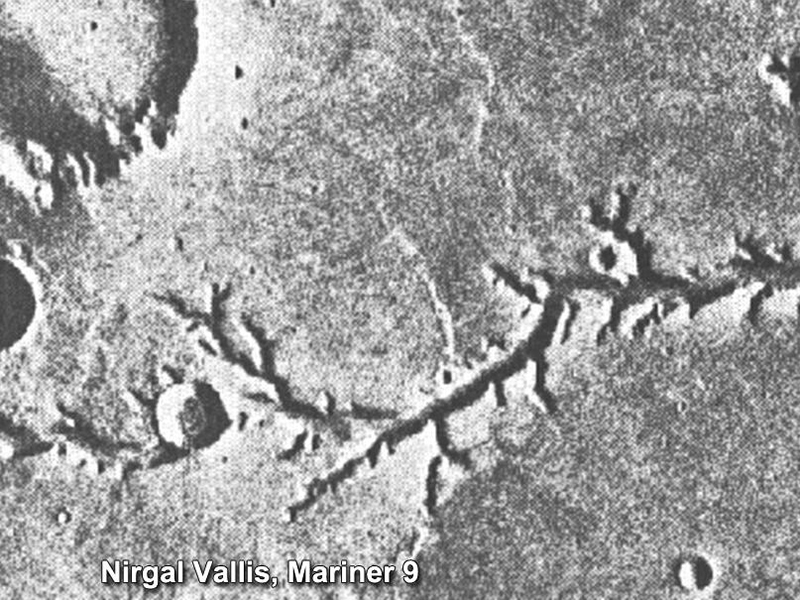 This view of channels on Mars came from NASA’s Mariner 9 orbiter. In 1971, Mariner 9 became the first spacecraft to enter orbit around Mars.

Back in 1971, scientists were eager for their first orbital views of Mars. But when Mariner 9 arrived in orbit, the red planet was engulfed by a global dust storm that hid most of the surface for a month. When the dust settled, geologists got detailed views of the Martian surface, including the first glimpses of ancient riverbeds carved into the dry and dusty landscape. 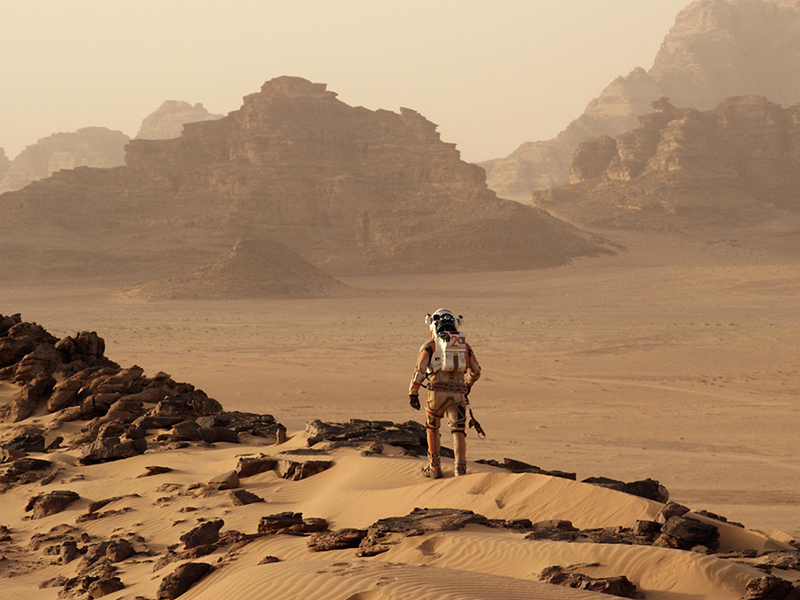 NASA engineers will need to design a spacecraft able to survive the red planet’s harsh climate, as recently depicted in “The Martian.” Image via Twentieth Century Fox.

As bad as the massive storm sounds, Mars isn’t capable of generating the strong winds that stranded actor Matt Damon’s character on the red planet in the movie “The Martian.” Mars’ atmosphere is too thin and winds are more breezy than brutal. The chore of cleaning dusty solar panels to maintain power levels, however, could be a very real job for future human explorers. 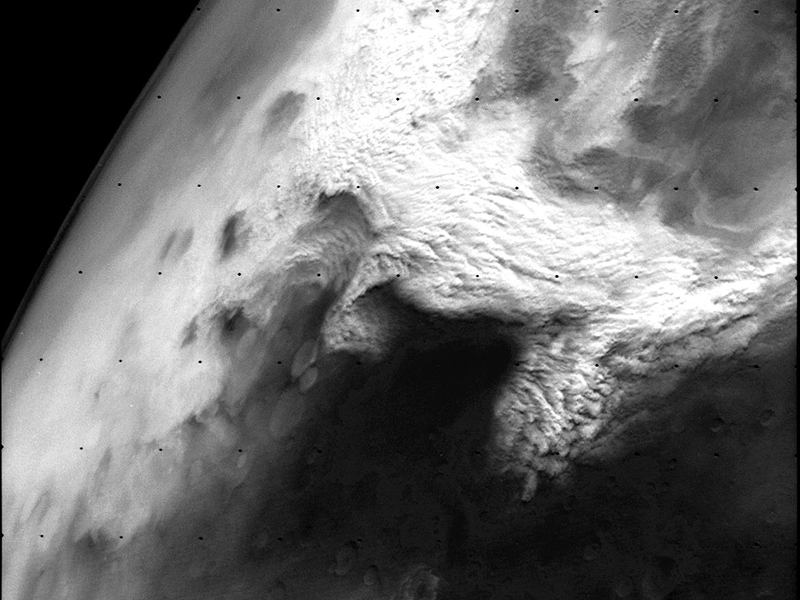 Scientists know to expect big dust storms on Mars, but the rapid development of the current one is surprising. Decades of Mars observations show a pattern of regional dust storms arising in northern spring and summer. In most Martian years, nearly twice as long as Earth years, the storms dissipate. But we’ve seen global dust storms in 1971, 1977, 1982, 1994, 2001 and 2007. The current storm season could last into 2019. 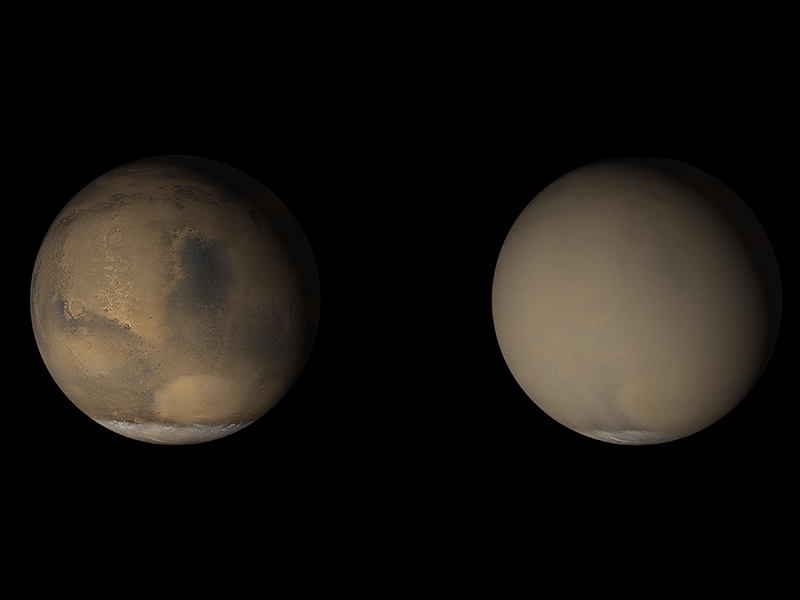 Two 2001 images from the Mars Orbiter Camera on NASA’s Mars Global Surveyor orbiter show a dramatic change in the planet’s appearance when haze raised by dust-storm activity in the south became globally distributed.

7: Science in the dust

Dust is hard on machines, but can be a boon to science. A study of the 2007 storm published earlier this year suggests such storms play a role in the ongoing process of gas escaping from the top of Mars’ atmosphere. That process long ago transformed wetter, warmer ancient Mars into today’s arid, frozen planet. Three NASA orbiters, the Curiosity rover and international partners are already in position to study the 2018 storm. 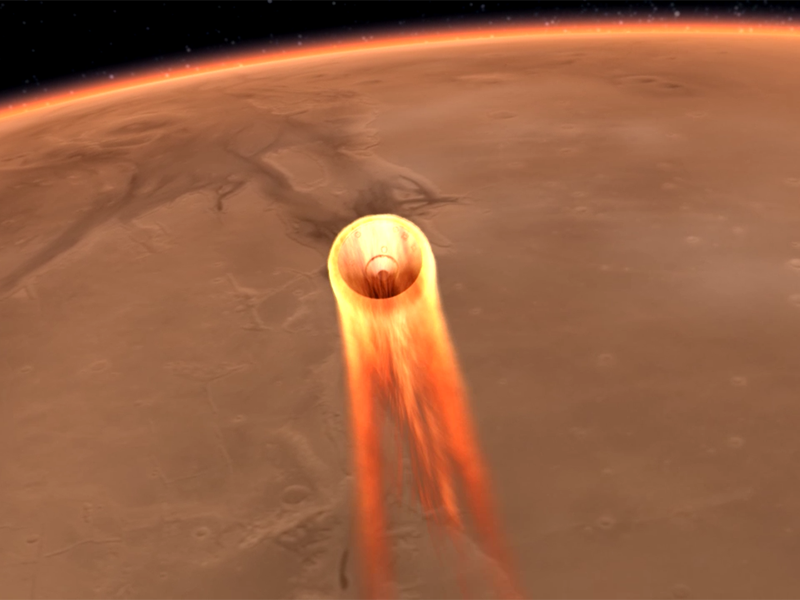 Mission controllers for Mars InSight lander – due to land on Mars in November – will be closely monitoring the storm in case the spacecraft’s landing parameters need to be adjusted for safety. 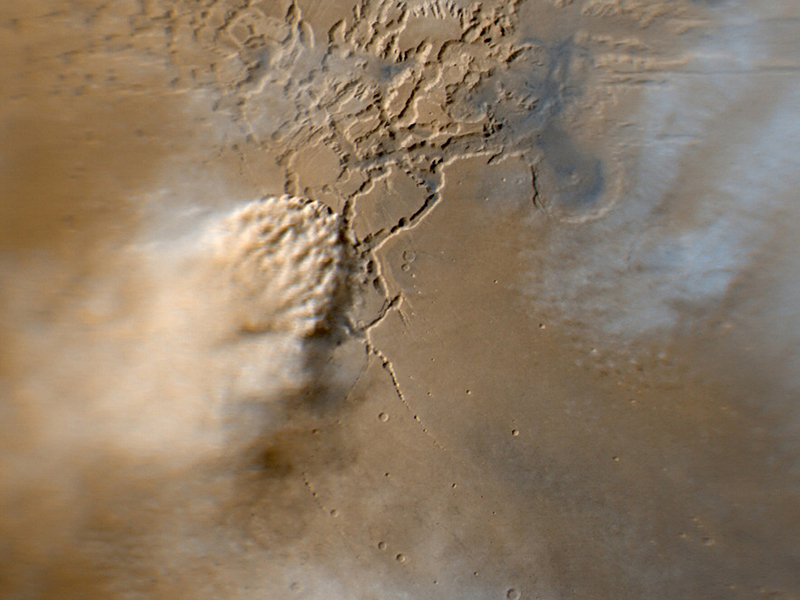 This image shows a turbulent mass of thick, roiling, red Martian dust rising from a network of canyons and flowing diagonally toward the lower left corner of the frame.

One saving grace of dust storms is that they can actually limit the extreme temperature swings experienced on the Martian surface. The same swirling dust that blocks out sunlight also absorbs heat, raising the ambient temperature surrounding Opportunity.

Track the storm and check the weather on Mars anytime. 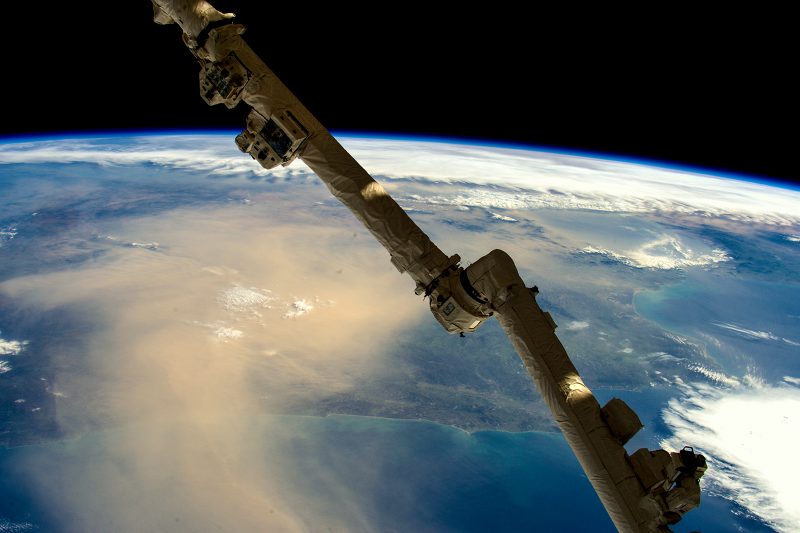 A Saharan dust storm as seen from the International Space Station orbiting above Earth.

10: Dust: Not just a Martian thing

A dust storm in the Sahara can change the skies in Miami and temperatures in the North Atlantic. Earth scientists keep close watch on our home planet’s dust storms, which can darken skies and alter Earth’s climate patterns.