The Curiosity rover has found organic molecules called thiophenes, which, on Earth, are associated with biological systems. Are they evidence for once-living microbes on Mars? 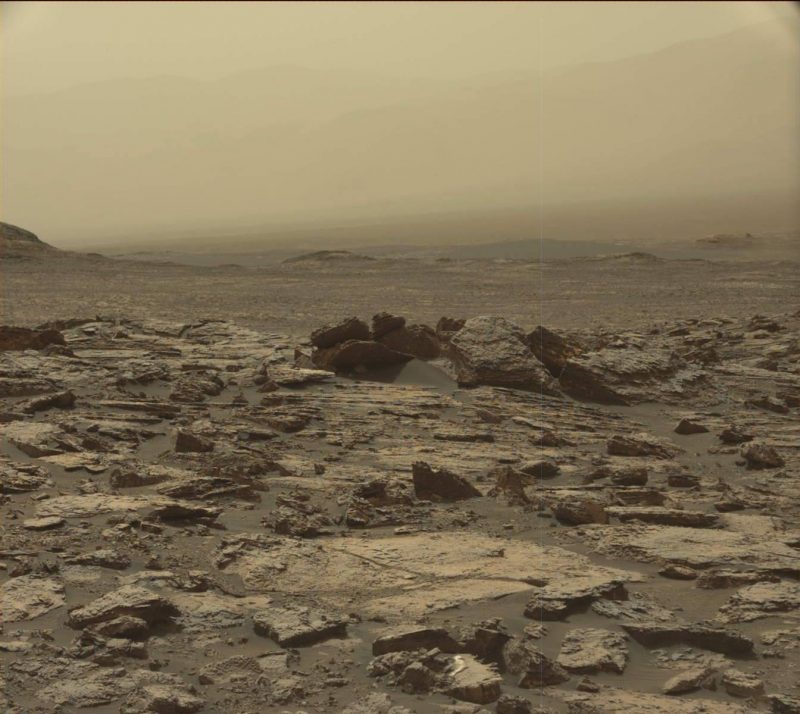 The search for evidence of life on Mars, past or present, just took an interesting new twist. Researchers studying the data sent back by NASA’s Curiosity rover have found evidence for organic molecules called thiophenes, which, on Earth at least, are primarily a result of biological processes. The researchers are not claiming proof of life, but the discovery is certainly intriguing. The finding is being called “consistent with the presence of early life on Mars.”

The findings were announced by researchers from Washington State University, and the peer-reviewed paper was published in the journal Astrobiology on February 24, 2020.

On Earth, thiophenes are often found in coal, crude oil, kerogen and even a species of mushrooms called white truffles. They can also be found in stromatolites and microfossils. On Mars, they were found by Curiosity, along with other organics, in an ancient mudstone formation called the Murray Formation.

The new paper explores some of the ways that thiophenes could be created on Mars, either biologically or abiotically (without life). As astrobiologist Dirk Schulze-Makuch, one of the two authors, explained in a statement:

We identified several biological pathways for thiophenes that seem more likely than chemical ones, but we still need proof. If you find thiophenes on Earth, then you would think they are biological, but on Mars, of course, the bar to prove that has to be quite a bit higher. 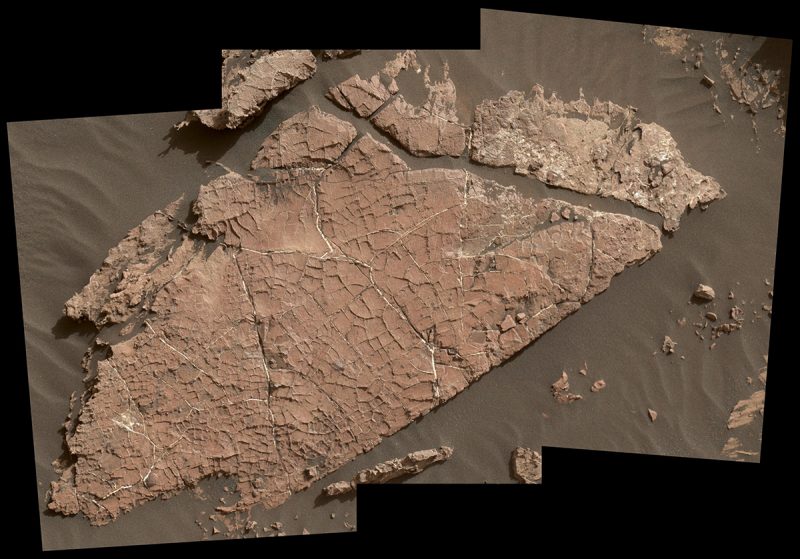 A slab of mudstone called Old Soaker in the Murray Formation. Curiosity took these images on December 31, 2016. The mudstone shows what are thought to be mud cracks from when the region was once wet and then dried up a few billion years ago. Image via NASA/ JPL-Caltech/ MSSS.

Thiophenes are essential to biology, containing four carbon atoms and one sulphur atom in a ring. They can, however, occur without any connection to life. On Mars, this could be from meteor impacts or perhaps thermochemical sulphate reduction (TSR), where a set of compounds is heated to 248 degrees Fahrenheit (120 degrees Celsius) or more. This could conceivably have happened during volcanic activity on early Mars.

One interesting aspect of the Martian thiophenes is that the geological processes that can create them require the sulphur to be nucleophilic, where sulphur atoms donate electrons to form a bond with their reaction partner. But most of the sulphur known to exist on Mars is non-nucleophilic. TSR could reduce them to nucleophilic sulphides, but so could BSR.

One problem is that while Curiosity can detect molecules such as thiophenes, it is limited in how much detailed analysis it can do. The onboard lab it uses – the Sample Analysis at Mars (SAM) instrument – primarily breaks down large molecules into smaller pieces using heat, although some additional testing can be done using wet chemistry.

So how can scientists tell if these thiophenes are biological or non-biological in origin?

It isn’t easy with the tools that Curiosity has, so an answer will probably have to wait for a follow-up mission such as NASA’s Perseverance rover, set to launch this July, or Europe’s Rosalind Franklin rover, also scheduled to launch in July or August 2020. 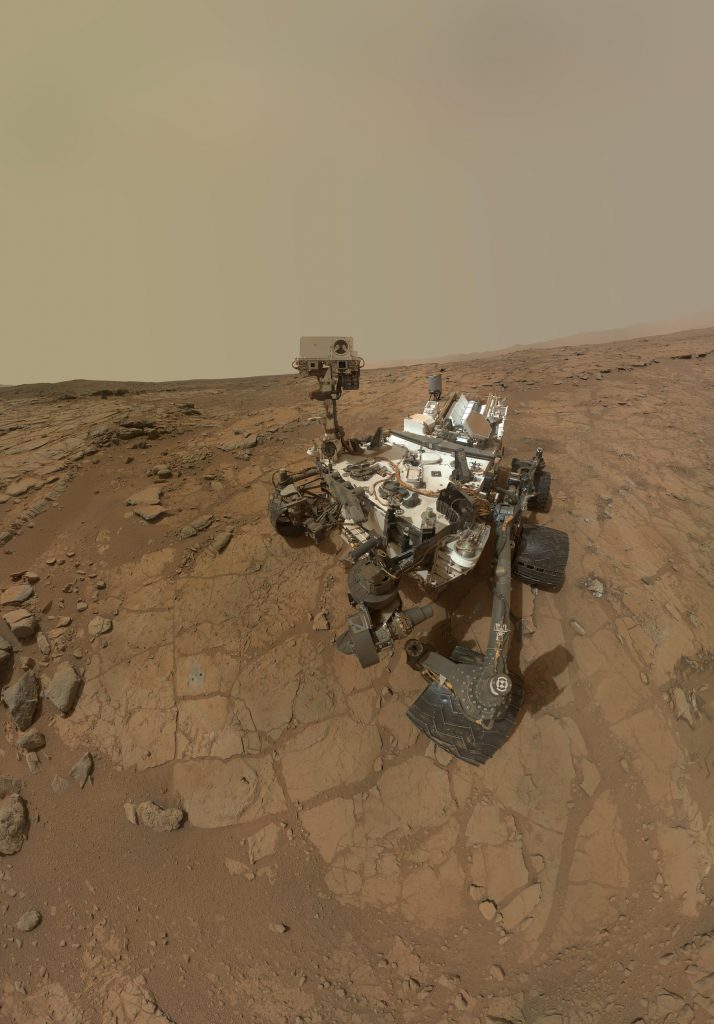 Self-portrait of Curiosity taken on February 3, 2013. Image via NASA/ Phys.org.

Rosalind Franklin, in particular, will use the Mars Organic Molecule Analyzer (MOMA) to analyze these kinds of molecules with additional non-destructive methods.

One big clue can come from the carbon and sulphur isotopes of the molecules. Lighter variations of isotopes – with fewer neutrons – are preferred by living organisms. Schulze-Makuch said:

Organisms are “lazy.” They would rather use the light isotope variations of the element because it costs them less energy.

Interestingly, as noted in an Air & Space article by Schulze-Makuch, the isotopic signature of sulphur-containing sediments found by Curiosity is very similar to that found in rocks from the Haughton impact crater in Nunavut, Canada … which are thought to result from BSR.

If one of the rovers found these or similar molecules with the lighter isotopes, that would be very suggestive of a biological origin, although perhaps still not proof. Additional analysis would still be needed to definitively determine whether the molecules were associated with once-living microbes. Better yet, of course, would be finding actual microfossils of ancient microbes.

Until then, we have tantalizing clues and hints at possible former life, but more research is needed. A biological explanation does seem at least plausible when other factors are taken into account, including now well-established evidence that conditions on Mars were once much more habitable on the surface then they are now. In Gale crater, the Curiosity rover has found that there used to be lakes and streams; it even found riverbed gravel left over from an ancient stream that used to empty into the crater lake. 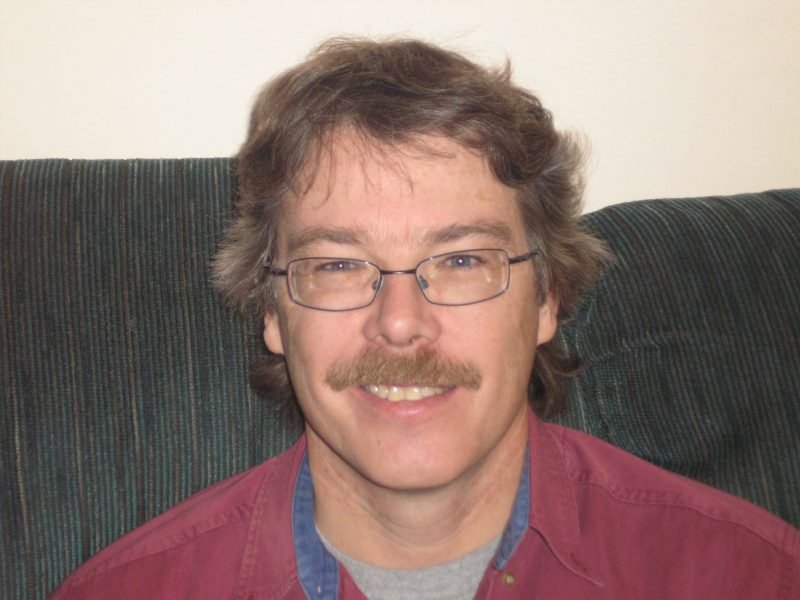 The rover also found a variety of organic compounds in rocks, not just the thiophenes, and confirmed that both methane and oxygen increase and decrease on a seasonal cycle in that area. This is still not proof of life, but taken all together, these lines of evidence may be starting to paint an intriguing picture. As Schulze-Makuch noted:

As Carl Sagan said ‘extraordinary claims require extraordinary evidence.’ I think the proof will really require that we actually send people there, and an astronaut looks through a microscope and sees a moving microbe.

Bottom line: The Curiosity rover has found organic molecules called thiophenes, which may be evidence for ancient life on Mars.