The discovery of exoplanet GJ 3512b – a planet “too big for its star” – adds fuel to the competition between 2 theoretical models of how planets form. It suggests many more Jupiter-like planets are waiting to be found, orbiting nearby sunlike stars. 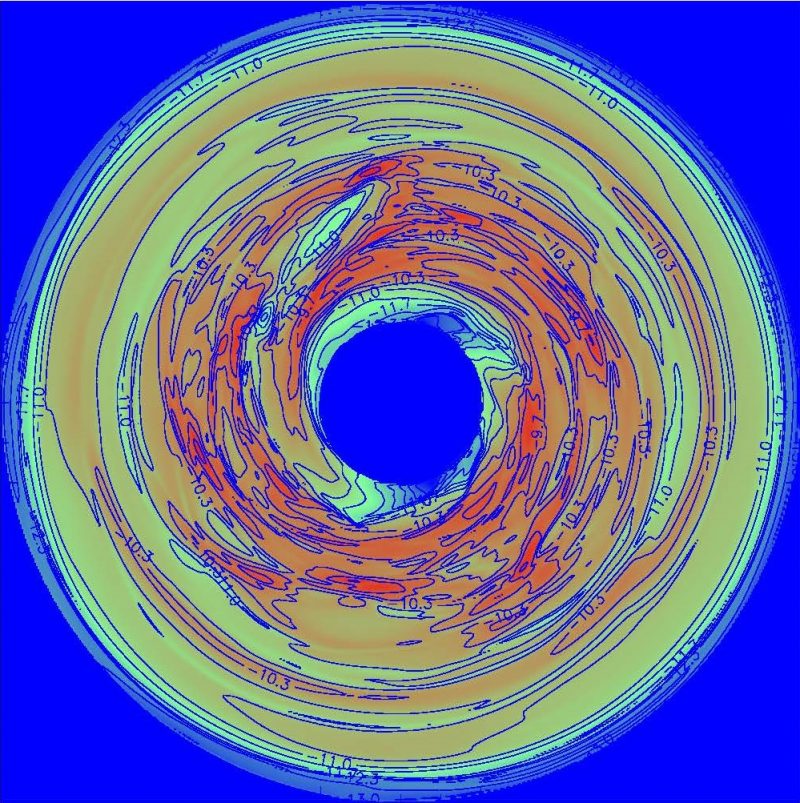 Notice the spiral structure here? This isn’t a galaxy; it’s a computer simulation of a newly forming solar system. It’s part of the disk instability model of how planets form, a model that’s been less accepted by astronomers – until now. A new discovery suggests this model may be correct. If so, Jupiter-like worlds may be common around nearby sunlike stars. Image via astronomical theorist Alan Boss/Carnegie Science.

Astronomers have discovered more than 4,000 exoplanets so far, and the number is still going up. Many are gas giant worlds like Jupiter or Saturn in our solar system, but that’s in part selection bias; the more massive exoplanets orbiting closer to their stars are the easiest exoplanets to find. Now, a new study suggests that there may be a large population of still-unseen Jupiter-like exoplanets waiting to be found orbiting nearby sunlike stars. The new results, from theorist Alan Boss at Carnegie Institution for Science, relate in a profound way to astronomers’ understanding of how planets form. These results have been accepted for publication in an upcoming issue of The Astrophysical Journal.

Boss’s new work is supported by a September 27, 2019, paper, published in the peer-reviewed journal Science, reporting on the discovery of a new exoplanet labeled GJ 3512b. This confirmed, massive, Jupiter-like planet orbits a very low-mass red dwarf star. And thus this planet – sometimes called the planet that shouldn’t exist – belies the previously most-popular theory of planetary formation, which had suggested it was impossible for such a massive planet to form around such a small star. From the September 27 paper:

Surveys have shown that super-Earth and Neptune-mass exoplanets are more frequent than gas giants around low-mass stars, as predicted by the core accretion theory of planet formation. We report the discovery of a giant planet around the very-low-mass star GJ 3512, as determined by optical and near-infrared radial-velocity observations. The planet has a minimum mass of 0.46 Jupiter masses, very high for such a small host star, and an eccentric 204-day orbit … We use simulations to demonstrate that the GJ 3512 planetary system challenges generally accepted formation theories …

It’s the challenge of the “impossible exoplanet” GJ 3512b to the most widely accepted planet-formation model that Boss is now addressing in his new paper. 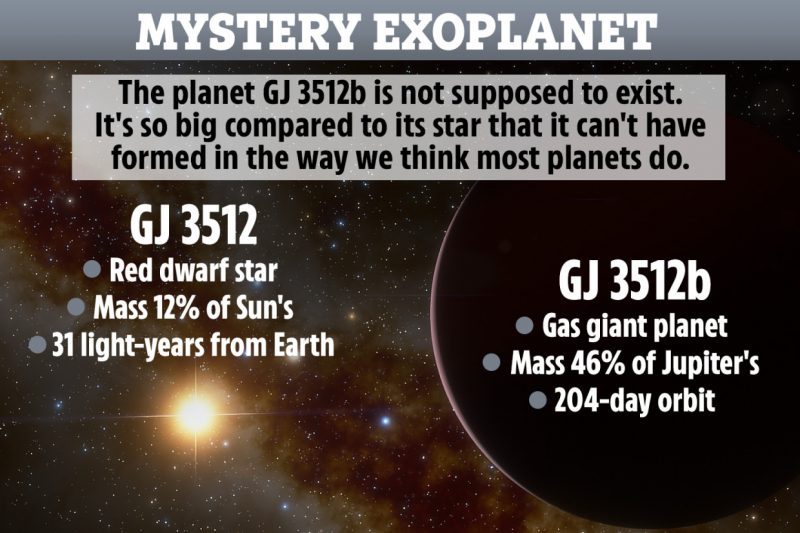 The new study is supported by, and expands on, the discovery of GJ 3512b, a gas giant that “shouldn’t exist” because current planet formation theory says it is too big for its very small star. Image via The Sun.

Astronomical theorists – people who’ve spent entire careers studying how planets form – have settled on two scenarios for the formation of gas giant planets. One scenario is called core accretion, and the other is called disk instability. In core accretion, planets slowly form through the collisions of increasingly larger material in the debris disk of gas and dust surrounding a young star, such as dust grains, pebbles, boulders, and eventually larger planetesimals. Meanwhile, the competing theory – disk instability – suggests a rapidly triggered process that occurs when the debris disk is massive and cool enough to form spiral arms.

According to the disk instability model of how planets form, clumps of self-gravitating gas and dust then form and contract and coalesce into a baby planet.

Core accretion has been the dominant theory for some time now, but planets like GJ 3512b represent a challenge to it. Boss has long been a proponent of the disk instability theory. With GJ 3512b now discovered and confirmed, Boss more than ever believes disk instability is the correct model for the formation of gas giant planets, and – if so – that there are many more Jupiter-like planets waiting to be found. According to Guillem Anglada-Escudé, a former Carnegie postdoc who worked with Boss on disk instability models, now at the Institute for Space Studies of Catalonia:

It’s a great vindication for the disk instability method and a demonstration how one unusual discovery can swing the pendulum on our understanding of how planets form. 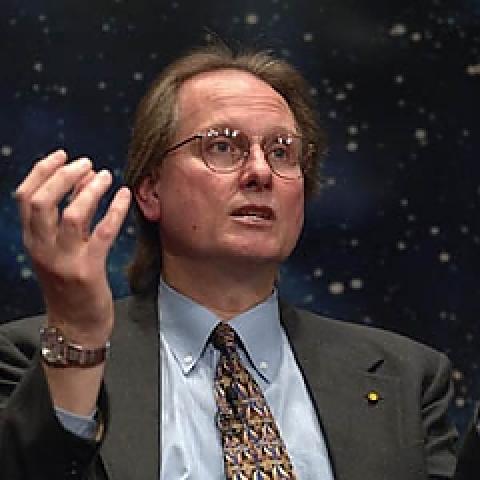 Here’s the big problem with core accretion as an explanation for planets like GJ 3512b. According to core accretion, the mass of a debris disk should be proportional to the mass of the young star around which it revolves. When you have a star that’s much smaller than our sun – hosting a planet that should be too big for it – then either the original debris disk was enormous in relation to this star, or core accretion just didn’t work in this planetary system.

In contrast, in the disk instability scenario, hot debris disks start out as very stable. As they gradually cool down, they form spiral arms around the star – yes, spiral arms similar to those in a galaxy – from which dense clumps eventually form planets. And as it turns out, the gas giants resulting from that process are at similar distances from their stars as Jupiter and Saturn are from the sun. As Boss surmised:

My new models show that disk instability can form dense clumps at distances similar to those of the solar system’s giant planets. The exoplanet census is still very much underway, and this work suggests that there are many more gas giants out there waiting to be counted.

If Boss is right, then disk instability for the creation of planets may be more common than thought, and there should be many more Jupiter-like worlds waiting to be discovered around nearby stars. Finding more planets like GJ 3512b would make that scenario even more compelling. 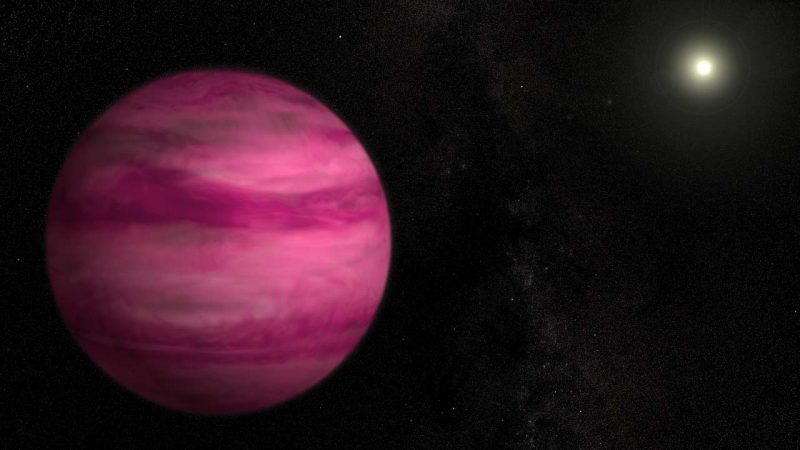 Artist’s concept of exoplanet GJ 504b, a gas giant 57 light-years away. Similar worlds may be common around nearby stars, according to a new study by theorist Alan Boss. Image via Goddard Space Flight Center/S. Wiessinger/Sci-News.

Bottom line: A new study from Carnegie Institution for Science suggests there are many more Jupiter-like gas giant planets orbiting nearby stars, waiting to be found. The study expands on the recent discovery of GJ 3512b, a massive planet that should be too large for its small star, and “shouldn’t even exist” according to the current most-popular theory of how planets form.