A mysterious and largely unknown dark energy is thought to pervade our universe. A telescope in West Texas is poised to survey a million galaxies, to explore it. 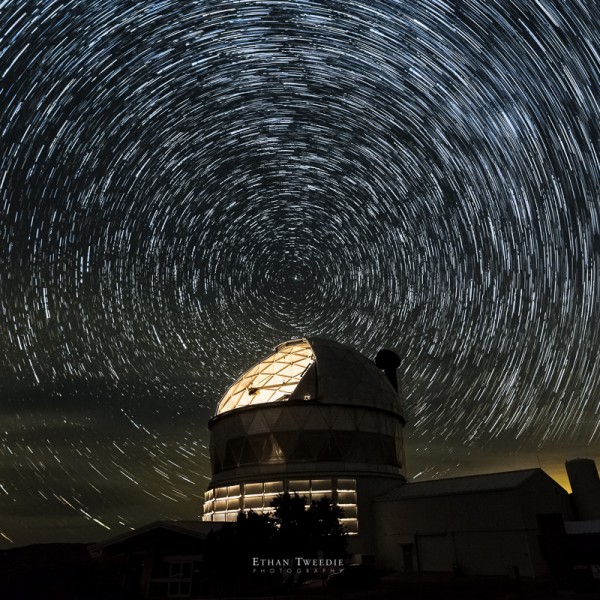 View larger. | Stars wheel around Polaris, above the Hobby-Eberly Telescope – home of the Dark Energy Experiment – at McDonald Observatory in West Texas. Image via Ethan Tweedle Photography. Used with permission.

At McDonald Observatory in West Texas last month, I toured of the inner workings of the Hobby-Eberly Telescope, which has recently undergone a $25 million upgrade and has just re-achieved first light. The telescope is being geared up for a new project, called the Dark Energy Experiment, or HETDEX. The project – due to begin in early 2016 – will survey a million galaxies in the next three to four years, with the aim of exploring the mysterious and largely unknown dark energy thought to pervade our universe. Follow the links below to learn more about dark energy, the Dark Energy Experiment and the fate of our universe.

The fate of the universe

Why was this relatively new telescope in Texas updated?

What other projects are probing dark energy? 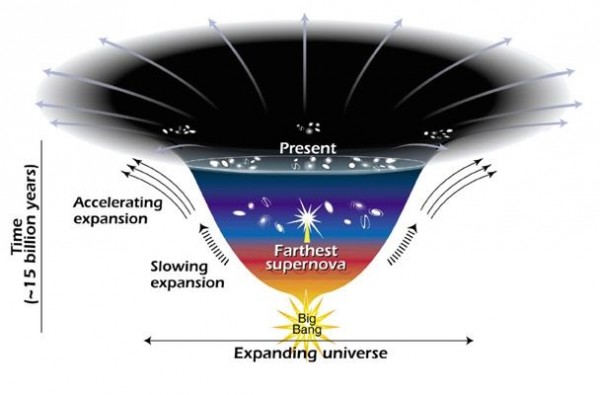 This diagram reveals changes in the rate of expansion since the Big Bang. The curve changes noticeably about 7.5 billion years ago, when objects in the universe began flying apart as a faster rate. Astronomers use the term ‘dark energy’ to describe a theoretical repulsive force causing this fast expansion. Image via NASA.

The fate of the universe. It used to seem so simple. In the last century, astronomers found universe was expanding: the galaxies are moving away from each other. That observation gave rise to Big Bang theory and the idea that the universe would either expand forever or, if its own self-gravity were strong enough, ultimately collapse back on itself.

By the early 1990s, astronomers thought they had the answer. They’d calculated how much mass was in the universe and determined it was destined for perpetual expansion, leading to a vast, dark, and cold state sometimes called the Big Freeze or Big Chill.

If the universe started in a Big Bang – and if it were going to expand forever – then it made sense to think that the expansion of the universe must be slowing down, however slowly. That’s because, throughout billions of years of expansion, gravity has been trying, relentlessly, to pull the universe back.

But then, in the 1990s, astronomers noticed something strange. They discovered that the expansion of the universe is moving faster today than it was a billion years ago.

The fast expansion of the universe has since been confirmed, but, within our current cosmology – our Big Bang universe, described by Einstein’s theory of General Relativity – this fast expansion in recent times is hard to explain. One possibility is that a mysterious force is pushing the universe apart. Astronomers don’t understand the force yet, but they’ve begun to explore it. They call it dark energy. A NASA website commented:

To explain cosmic acceleration, cosmologists are faced with two possibilities: Either 73% of the universe exists in an exotic form, now called dark energy, that exhibits a gravitational force opposite to the attractive gravity of ordinary matter, or General Relativity must be replaced by a new theory of gravity on cosmic scales.

Did you catch that reference to gravity? Dark energy is a gravitational force because, according to the calculations and models of modern physicists and astronomers, it works like gravity. But dark energy pushes, rather than pulls.

The percentages of dark energy, dark matter and ordinary matter thought to exist in our universe. Pie chart via NASA

Also, did you catch that number? If our modern cosmology holds true, then 73% of our universe exists as dark energy. Actually, the number may be somewhere between 70% and 75%. Another major chunk of the universe (21-26% or so) is thought to exist as dark matter. The variation in the numbers reflects uncertainties in the measurements. Either way, it appears that only 4 percent of the universe is composed of regular matter, such as stars, planets and people.

It could spring from the vacuum of space itself, becoming a more dominant force as the universe expands and gets more spacious. Dark energy could be exotic new particles or other undiscovered physics. Dark energy could mean that our understanding of gravity needs an overhaul.

It’s this dark energy that this large telescope in Texas is now poised to explore.

The entire project, by the way, will cost $42 million. The funding comes from three different sources: a third from the state of Texas, a third from the federal government, and a third from private foundations. The project will begin in 2016 and take three to four years to complete. Astronomers have said they expect to have a pretty good idea about their findings within the first year.

Steven Weinberg, Nobel Laureate in physics at the University of Texas has said:

Dark energy is not only terribly important for astronomy, it’s the central problem for physics. It’s been the bone in our throat for a long time.

Dark energy is one of the biggest problems out there in science. It likely represents a fundamental misunderstanding of the basic properties of the universe.

Personally, the problems that push the boundaries in such an extreme way are the most exciting to me. And the most attractive aspect is not so much in correcting a problem, but it is finding something new, thinking of the universe in a whole new way.

I want to be part of that … 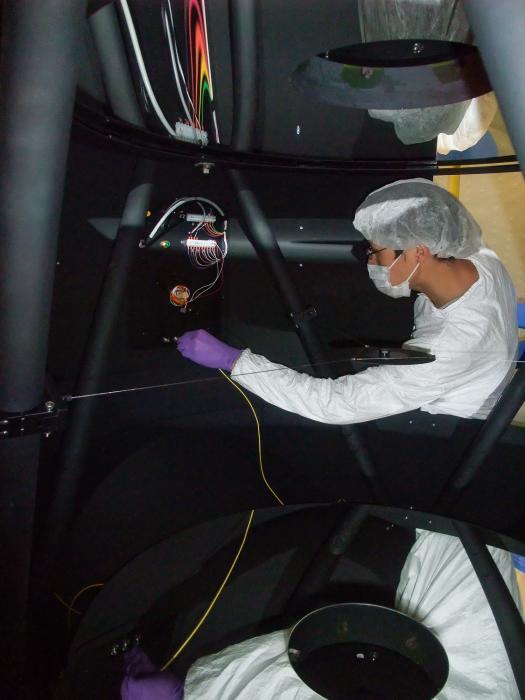 Research associate Hanshin Lee managed a nearly seven-year process by the University of Arizona College of Optical Sciences to build and test the $6 million Simmons Optical System for the Hobby-Eberly Telescope Dark Energy Experiment. Read more about this image.

Why was this relatively new Texas telescope updated? The Hobby-Eberly telescope came online originally in 1997. Now it has undergone a major upgrade to make it suitable for the Dark Energy Experiment, which is a collaboration between Penn State, the University of Texas at Austin, Texas A&M, the Universitats-Sterwarte Munich, the Astrophysical Institute of Potsdam, and the Max-Planck-Institut fuer Extraterrestrische Physik.

One major change to the telescope is to the new optical system partially pictured above. The new Harold C. Simmons Dark Energy Optical System is a set of optics that sits above the Hobby-Eberly Telescope’s main mirror, in the location usually occupied by a secondary mirror.

It enlarges the telescope’s field of view by 120 times, making it now 70% of the diameter of a full moon.

Because it allows more of the Hobby-Eberly Telescope’s mirror to be used, it makes the telescope effectively larger. The mirror’s effective size has increased from 9.2 meters to 10 meters, meaning this telescope is now tied for the world’s third-largest optical telescope. 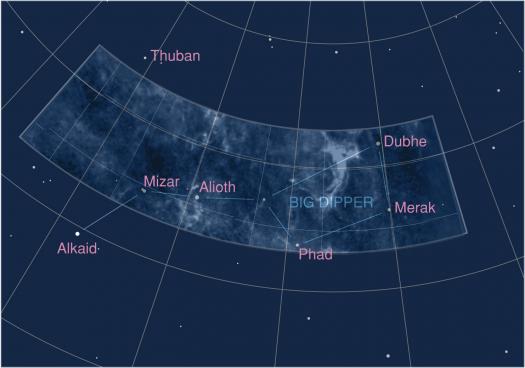 In the Dark Energy Experiment, the telescope will search an area of northern sky overlapping the Big Dipper asterism. This part of the sky is above the plane of our Milky Way galaxy, which is filled with clouds of gas and dust that would otherwise block the view of distant galaxies. While the Dipper’s stars are only a few dozen light-years away, the galaxies targeted in this project are around 10 billion light-years away. Image via Tim Jones/ McDonald Observatory.

But the heart of the upgrade to the telescope – and what makes the Dark Energy Experiment possible – are the spectrographs. A suite of 150 spectrographs is being mounted on the Hobby-Eberly Telescope. Using 34,000 optical fibers, they’ll be wired into the focal plane of the telescope. When the project begins in 2016, these spectrographs – used to split light into its individual wavelengths – will enable astronomers to map the three-dimensional positions of one million galaxies.

The HETDEX website explained more about what will be studied in the Dark Energy Experiment:

HETDEX will study baryonic acoustic oscillations — ‘sound waves’ from the first 400,000 years of the universe.

In those early years, the universe was a dense ‘soup’ of particles of matter and particles of energy. Disturbances created sound waves that rippled across the dense universe. At 400,000 years, the universe became cool and thin enough that the ripples created during the Big Bang became frozen at a unique size. Special telescopes on the ground and in space have measured the ‘crests’ of the ripples in the early universe, like the peaks of the waves that roll away from a stone thrown into a pond.

The peaks of these waves formed a basic yardstick. As the universe has expanded, that yardstick is maintained, although it grows with the expanding universe.

HETDEX will find this yardstick by measuring the distances between galaxies at different times in the early universe. Careful mathematical analysis of its map of distant galaxies will reveal how the yardstick changed with time, telling us the size of the universe at different epochs.

Comparing the size and expansion rate at different times in the history of the universe, which are influenced to different degrees by the ‘repulsive’ force of dark energy, will reveal the true nature of dark energy.

More details about HETDEX science in this recent article by Eric Berger at arstechnica.com

What other projects are probing dark energy? The Hobby-Eberly Telescope Dark Energy Experiment is not the only ongoing project designed to probe the mysteries of dark energy. The Dark Energy Survey at Cerro Tololo Inter-American Observatory in Chile is also designed to help understand this mysterious, yet pervasive force.

More than 120 scientists from 23 institutions in the United States, Spain, the United Kingdom, Brazil, and Germany are working on it. They’re using a highly sensitive 570-Megapixel digital camera, which they call DECam, mounted on a 4-meter telescope at Cerro Tololo, to measure the expansion of the universe.

That 5-year project began in 2013 and is surveying the southern, not the northern sky. 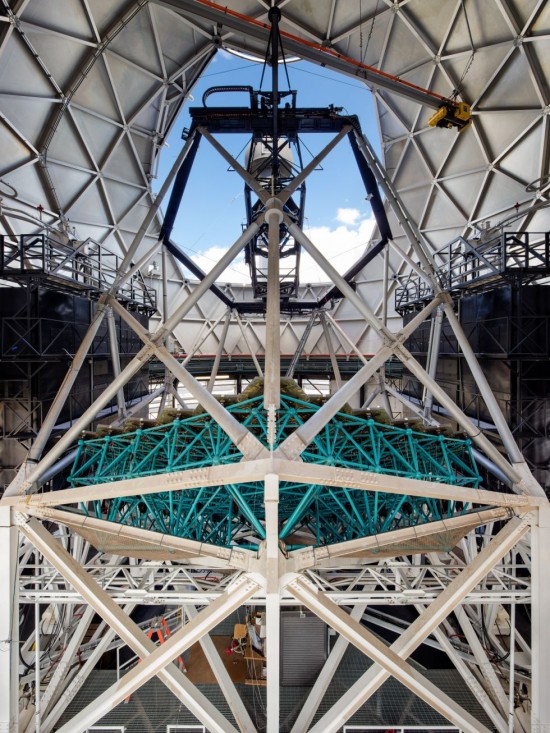 Inside the Hobby-Eberly Telescope. Image via Ethan Tweedle Photography.. 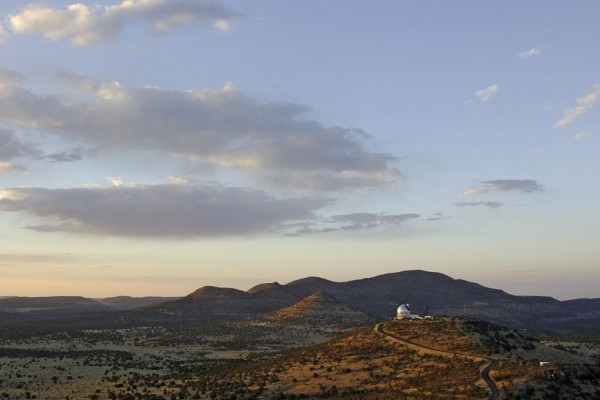 Hobby-Eberly Telescope in the Davis Mountains of West Texas. Via Bill Nowlin Photography and McDonald Observatory.

Bottom line: Hold onto your hats. We’re about to get some answers on the puzzle of dark energy, the mysterious theoretical ‘repulsive force’ in our universe. According to known cosmology, the expansion of the universe should be slowing down. But it’s not. It’s speeding up. The Hobby-Eberly Telescope Dark Energy Experiment will survey a million galaxies to learn with unprecedented precision how the expansion rate of the universe has changed over time. Its result will be actual observational data that will be used in tests of dark energy theories.