Ten more things you may not know about the solar system

There are many myths, misconceptions and misunderstanding about the Universe. Sometimes the things that we think we know are partly or completely wrong. I’ve already discussed a number of these in previous blogs:

Ten things you may not know about stars

Here are ten more things about the Universe — or specifically the solar system — that you may not know:

10 ) Pluto was discovered by accident
As objects in space move, their trajectories can be influenced by the gravity of other objects, slightly changing or perturbing the trajectory over time. After Uranus was “discovered” in 1781, astronomers noted a small and unexpected deviation from its predicted orbit. They guessed that this may have been due to the gravitational pull of some object farther out. They began a search from an object farther from the sun than Uranus, and in 1846 German astronomer Johann Galle discovered Neptune, from observations based on mathematical predictions. However, astronomers suspected that Neptune could not be the sole cause of Uranus’ deviations from its originally calculated orbit. They refined their calculations and started looking again, and in 1930 American astronomer Clyde Tombaugh discovered Pluto, which for 76 years was considered the 9th planet of the solar system. However, since then astronomers have discovered that the supposed perturbations that caused Uranus’ excess orbital deviations were imaginary. Revised calculations showed no need to look for any additional gravitational influence, and so Pluto was discovered by serendipity.

9 ) Most meteorites are stone
A visit to many science museums and planetaria with meteorite exhibits may leave you with the impression that most “shooting stars” that fall to Earth are heavy chunks of nearly pure iron — in other words, iron meteorites. The truth is that iron meteorites (which usually are iron with a little nickel mixed in) really account for only about 5 percent of those known to fall on Earth. Roughly 95% are of the stone variety, similar in many ways to rocks on Earth (with some frequent and important differences). Iron meteorites tend to be over represented in displays and collections simply because they are more distinctive and easier to recognize.

8 ) Saturn isn’t the only planet with rings
Although Saturn’s rings are certainly the most beautiful and easily observed, Jupiter, Uranus and Neptune also all have rings. While Saturn’s bright rings likely are made of ice particles, Jupiter’s very dark and difficult to observe rings apparently are composed of dust particles. They may contain tiny fragments of broken up meteoroids or asteroids, and perhaps particles ejected by the volcanic moon Io. The ring system of Uranus is slightly more distinctive than Jupiter’s, but still very faint, and possibly resulted from collisions between small moons. The rings of Neptune are faint and dark, much like those of Jupiter. These dim rings of Jupiter, Uranus and Neptune cannot be seen in small telescopes from Earth. So Saturn is still “Lord of the Rings,” but it is not the only ring bearer.

7 ) Saturn would float, sort of
A common and frankly, overused, saying is that Saturn would float on an ocean. The saying is used to illustrate the fact that the overall density of Saturn is 0.69, meaning that it is only 70 percent the density of water, like that of birch or cherry wood. So if you could find an ocean large enough, with a uniform gravitational field underneath, the analogy would have you see Saturn floating like a big ball of wood. But would it? In fact, the outer layers of Saturn are much less dense than water. Theoretical models suggest, however, that at about halfway toward the center of Saturn, the density has increased to equal that of water, and that the density raises dramatically all the way down to the center of the planet, where it may be as high as 13 times that of water. By contrast, most rocks on the surface of the Earth have densities only 2 or 3 times that of water. Saturn would not float in a giant bathtub or ocean as is often claimed. Only the outer parts would “float.” The inner half of the planet would sink like a very heavy stone.

6 ) The only object with an atmosphere like Earth is Titan
Contrary to popular opinion, there is one body in the solar system with an atmosphere substantially similar to Earth’s. It is Saturn’s moon Titan. Larger than our moon and almost as large as the planet Mercury, Titan has an atmosphere that is about 20% more massive than the Earth’s atmosphere. Unlike Venus’s and Mars’s atmospheres, which are much thicker and much thinner, respectively, than Earth’s and composed of Carbon Dioxide, the atmosphere of Titan is mostly Nitrogen. The Earth’s atmosphere is about 78 percent Nitrogen by volume. The similarities to the atmosphere of the Earth, and especially the presence of methane and other organic molecules, have led many to suggest that Titan can be viewed as an analog to an early Earth, or may have some kind of biologic activity. For that reason it is deemed one of the best places in the Solar System to look for evidence of life. (Note that the presence of methane and other “organic” molecules is not proof of life by any means, as these compounds can be formed through inorganic processes.)

5 ) The clouds of Venus are sulfuric acid
Just 50 years ago, astronomers had no idea what Venus was really like. They knew that it was closer to the sun than the Earth, and hence was likely hotter, but not until the late 1960s when Soviet probes first analyzed the atmosphere. What they discovered was startling. Not only is Venus hotter than Earth — much hotter — its atmosphere is much thicker. In fact, the atmospheric pressure at the surface of Venus is nearly 100 times heavier than what we experience on Earth. Unprotected humans — and spacecraft — would be very quickly disabled and crushed by the more than 1300 pounds per square inch pressure. They would be asphyxiated by the oxygen-less carbon dioxide atmosphere, and quickly baked by the 900 degree F temperature (a typical home oven on Earth goes up only to about 500 degrees F). Venus is an unwelcoming place. But wait! If the temperature, pressure and lack of oxygen are not enough, Venus has one more weapon against unwanted forms of life — sulfuric acid. It seems that the particles that form the planet enveloping white clouds are formed from sulfur dioxide and droplets sulfuric acid — battery acid. Although the sulfuric acid forms a kind of rain, it does not reach the ground on Venus, nor is it as prevalent as original thought. But in any event, Venus is a very nasty place.

4 ) The Solar System has “lost” two planets, at least
Pluto originally was considered a planet, but due largely to its diminutive size (much smaller than our moon), it has been demoted to a “Dwarf” planet. Vulcan, once thought to orbit closer to the sun than even Mercury, simply does not exist. Like the equally fictitious home of Star Trek’s Mr. Spock, the sun’s Vulcan would have been very hot and covered with deserts. In fact it likely would not have been habitable at all. All considerations are for naught, however, since it does not exist. Vulcan’s existence was proposed more than 150 years ago to explain some peculiarities of Mercury’s orbit. Bolstered by supposed observations, the idea was popular for some time. However, more recent and more refined observations have ruled out any possibility that Vulcan exists. Thus planet Vulcan, like planet Pluto, is now a sidelight to astronomical history.

In addition, recent studies have suggested that a fifth giant planet — similar to Jupiter — may have once orbited the sun, but was long since ejected from the Solar System through gravitational interactions with the other planets!

3 ) The closest place to Hell may be near Jupiter
Many people are told that Hell is at the center of the Earth, and unquestionably it must be very hot there. But a closer approximation to Hell may be in orbit around Jupiter, on the surface of the moon Io. This tortured satellite is constantly flexed, stressed and strained out of shape by Jupiter’s enormous gravity. As a result, the moon’s subsurface is heated and forms vast amounts of magma, which erupts onto the surface in numerous volcanoes and fissures. Io is the most volcanically active object in the solar system, at least in terms of relative surface involvement. It is covered with great flows of brightly colored, sulfur (brimstone)- laced lava. On top of this, Io is bathed in deadly radiation trapped in Jupiter’s radiation belt. 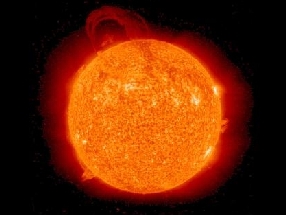 2 ) The sun is not burning
Even in this day and age, people still think that the sun is on fire. Others know that it is not really burning, but have no clue as to what is happening. The sun is not burning. Burning, or combustion, is a chemical reaction involving the electrons in orbit about the nuclei of atoms such as hydrogen and oxygen. Burning is not really that efficient. Physicists have calculated that if the sun were composed of some combustible material, say coal or wood, it could burn for only a few thousand years, which is less even than the known age of human civilization. Since we know the sun has been around for much, much longer than that, it can’t be burning. (Not to mention the fact that it would need an oxidant to complete the process.) So the sun is not burning. It produces heat, light and energy through a more basic and efficient process called nuclear fusion. In nuclear fusion, the very hearts of atoms are transformed from one element to another, which releases tremendous amounts of energy. We have harnessed the same process in the form of a hydrogen (or nuclear) bomb. In this way, the sun has been able to shine without “burning” for billions of years.

1 ) We may be drinking comets
Comets are relatively rare today. Seeing a big, bright comet is a once in a lifetime event for some folks. But long ago — long ago — they were much more common. In fact, as the solar system formed some billions of years ago, astronomers believe that comets were much more common. They frequently crashed into Earth, long before humans and perhaps before any life existed on our planet. Astronomers have determined that comets are composed mostly of ice — water ice. One popular theory is that so many of these icy bodies crashed into the Earth that their ices melted and formed Earth’s oceans. Although there are other possibilities and some questions remain, the idea that our oceans are really melted comets is probably the best. So go have yourself a glass of comet!

Thank you! Your submission has been received!
Oops! Something went wrong while submitting the form.
END_OF_DOCUMENT_TOKEN_TO_BE_REPLACED