Behold the erratic motion of the south pole vortex of Venus. And a word about vortices in the atmosphere of other planets in our solar system, including Earth.

The planet next door, Venus, has two vortices (whirlwinds) above its south pole, and two more above its north pole. Astronomers in the Planetary Science Group of the University of the Basque Country (UPV/EHU) have been closely monitoring the complicated movement of the south pole vortices of slow-rotating Venus. The south pole vortex is a huge double whirlwind the size of Europe. Double? Yes. In the south polar vortex of Venus, there are two main cloud layers separated by a distance of about 20 kilometers (about 12 miles). These scientists announced today (March 24, 2013) that they’ve confirmed the “erratic” movement of air in the double vortex at Venus’ south pole. And, surprisingly they said, each part of the vortex forms a separate “tube,” which “goes its own way.” Itziar Garate-Lopez, head researcher, said in a press release:

We knew it was a long-term vortex; we also knew that it changes shape every day. But we thought that the centers of the vortex at different altitudes formed only a single tube, but that is not so. Each center goes its own way, yet the global structure of the atmospheric vortex does not disintegrate.

These scientists published their results online in the journal Nature Geoscience. 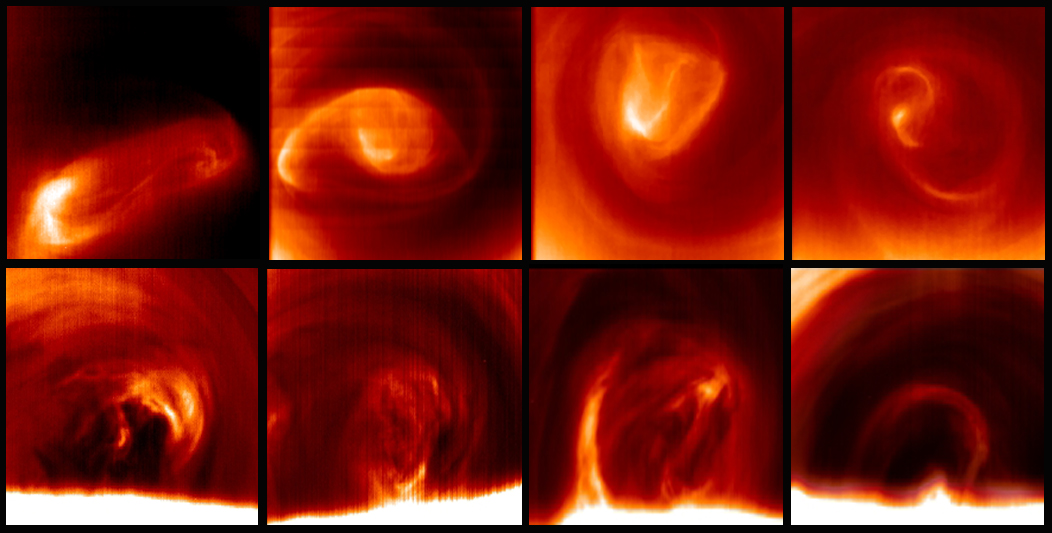 Long-term vortices are a frequent phenomenon in the atmospheres of fast-rotating planets, like Jupiter, Saturn and Earth, for example. But Venus rotates very slowly. It rotates only once every 243 Earth-days, more slowly than any other planet in our solar system. Its rotational speed is in contrast to about 24 hours for Earth, 9 hours 56 minutes for Jupiter and 10 hours 39 minutes for Saturn. Still, Venus has permanent vortices in its atmosphere at both poles. One clue to the reason might be that the rotation speed of Venus’ atmosphere is much greater than that of the planet. Traveling at speeds of around 200 meters per second, the atmosphere takes only four Earth days to go all the way around the planet. Garate-Lopez said:

We’ve known for a long time that the atmosphere of Venus rotates 60 times faster than the planet itself, but we didn’t know why. The difference is huge; that is why it’s called super-rotation. And we‘ve no idea how it started or how it keeps going. 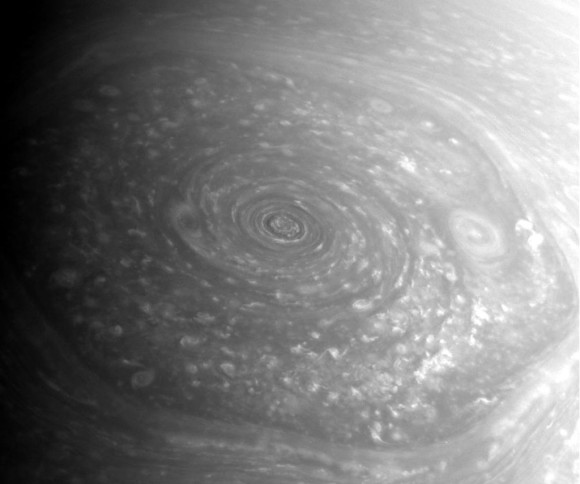 Wide-angle camera view from Cassini spacecraft of the north polar region on Saturn. It shows the central storm clouds inside a larger structure called the north polar hexagon. This vortex on Saturn is similar to Earth’s polar vortex where winds blow in a circular pattern. Image via NASA/JPL-Caltech/Space Science Institute

So the vortices above the poles of Venus appear to be ever-shifting, but permanent. Meanwhile, on Earth, the vortices for each pole are cold-core low-pressure areas that strengthen in the winter and weaken in the summer. They usually span 1,000–2,000 kilometers (620–1,240 miles) in which the air is circulating (in a counter-clockwise fashion in the Northern Hemisphere). Garate-Lopez said:

On the Earth there are seasonal effects and temperature differences between the continental zones and the oceans that create suitable conditions for the formation and dispersal of polar vortices. On Venus there are no oceans or seasons, and so the polar atmosphere behaves very differently. 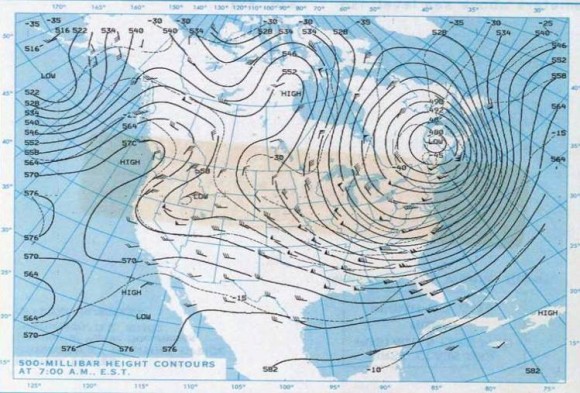 Strong polar vortex over Maine on February 24, 2012. Image via NOAA.

Bottom line: Astronomers in the Planetary Science Group of the University of the Basque Country (UPV/EHU) announced today (March 24, 2013) that they’ve confirmed the “erratic” movement of air in the double vortex at Venus’ south pole. And, surprisingly they said, each part of the vortex forms a separate “tube,” which “goes its own way.” Planetary vortices are common for fast-rotating planets like Jupiter, Saturn and Earth, but Venus rotates very slowly. However, its atmosphere rotates around the planet 60 times faster than the planet itself!