Active Region 1504 rotated into view on the sun earlier this week and produced several M-class flares and at least two CMEs. Effects due June 16.

An active region on the sun – known to space scientists as AR 1504 – rotated into view earlier this week. This region produced some C-class solar flares and three stronger M-class solar flares. It also produced at least two coronal mass ejections (CMEs) on June 13 and 14. CMEs which are massive bursts of charged particles from the sun that hurtle through space. Both CMEs were aimed this way and should arrive in Earth’s vicinity today. No major effects are expected, but telecommunications, for example, might be affected.

There are also a few other active regions visible on the sun: 1505, 1506 and 1507. The video above starts off with a view from June 9 to 12 in the 171 angstrom wavelengths of solar radiation. Looking at those wavelengths, you can see many coronal loops extending off of the sun where plasma is moving along magnetic field lines. Then the video switches to the 304 angstrom view, in which you can see the M-class solar flares.

I like this still image of the June 14 flare, too … 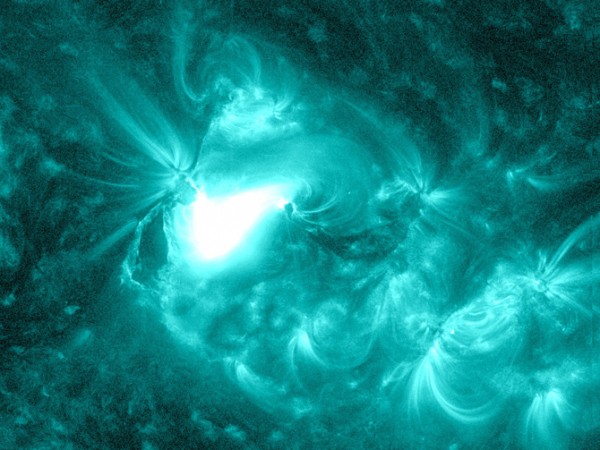 NASA says the first CME was traveling at approximately 375 miles per second (600 km per second) and was directed toward Earth, though due to its relatively slow speed, the effect on Earth is expected to be minimal. The second CME has been traveling much faster – about twice as fast as the first CME. It was aimed toward Earth, too, and could also impact Mars and the Spitzer spacecraft.

CMEs are not dangerous to us on Earth’s surface, but they can affect satellites in orbit, among other technologies. 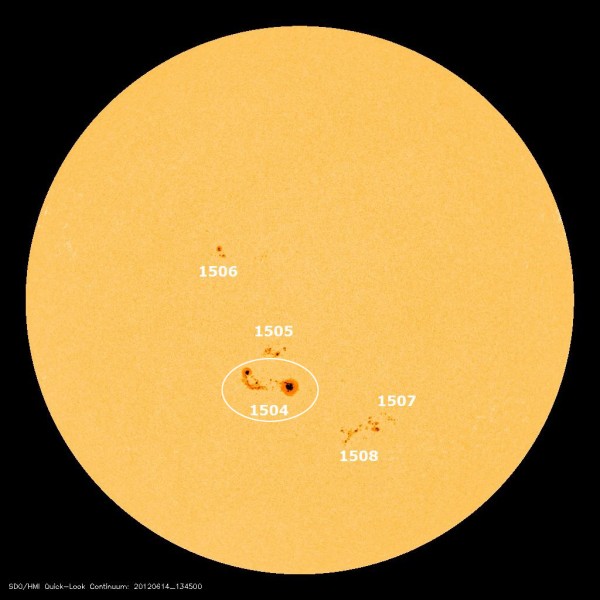 Bottom line: On June 13 and 14, 2012, an active region on the sun known as AR 1504 began spitting solar flares and CMEs. There have been two M-class flares and two coronal mass ejections (CMEs), both of which are headed this way and one of which might have an effect on earthly telecommunications. The CMEs are expected to arrive on June 16.