This video, merging more than 2 decades of footage from SOHO cameras, captures thousands of sunspots, flares, and coronal mass ejections breaking out from the sun.

On December 2, 2020, ESA released this cool video montage of 25 years of the sun’s activity, as observed by a space observatory called SOHO (the Solar and Heliospheric Observatory). Since its launch on December 5, 1995, SOHO’s cameras have captured thousands of sunspots, flares, and coronal mass ejections that continuously break out from the sun.

As you watch this video, be sure to check out the stars in the background!

SOHO moves around the sun in step with the Earth, by slowly orbiting around what’s called L1, the first Lagrangian point, a position in space about a million miles (1.6 million km) from Earth, where the combined gravity of the Earth and sun keep SOHO in an orbit locked to the Earth-sun line.

All previous solar observatories have orbited the Earth, so their observations were periodically interrupted as our planet “eclipsed” the sun. But SOHO’s unique orbit gives it an uninterrupted view of the sun. ESA explained in a statement:

What becomes clear as the sun turns and years pass and background stars whirl by, is how constant the stream of material is that is blasted in all directions – the solar wind. This constant wind is interrupted only by huge explosions that fling bows of material at vast speeds, filling the solar system with ionized material and solar radiation. 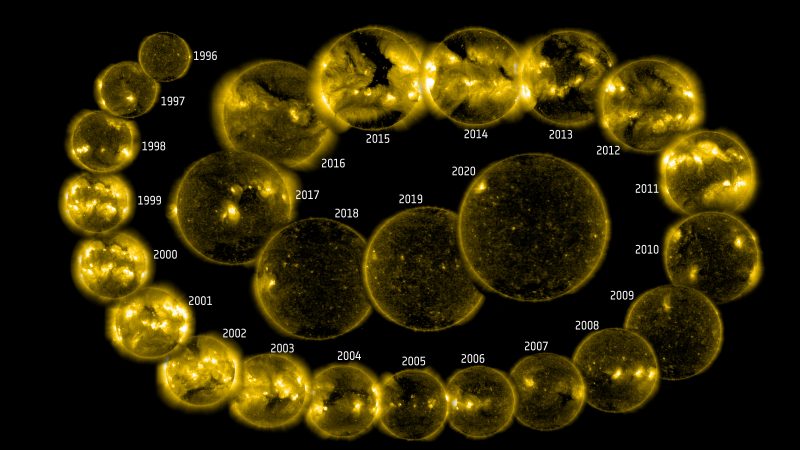 View larger. | The ESA/NASA’s SOHO solar observatory has been observing the sun for 25 years. In that time, SOHO has observed 2 of the sun’s 11-year sunspot cycles, as solar activity waxes and wanes. This montage of 25 of the spacecraft’s images provides a snapshot of the changing face of our sun. The individual images show gas with a temperature of about 2 million degrees Celsius (3.6 million F) in the sun’s atmosphere, or corona, which extends millions of miles from the sun. The brightest images occur around the time of solar maximum, when the sun’s magnetic field is strongest and highly dynamic, changing its configuration and releasing energy into space. Image via ESA.

In the video at top, you’ll notice that every now and then, the entire image is shrouded in white ‘noise’. These are the moments in which solar particles are flung at near-light speeds directly at the SOHO spacecraft, ESA said, causing energetic solar protons to strike the spacecraft’s cameras and momentarily interfere with their observations.

It also means that nearby satellites orbiting Earth will also have received a direct hit just fractions of a second later, potentially damaging their onboard electronics amd solar cells, and creating what appears as “snow storms.”

These solar particle events are often associated with coronal mass ejections, aka CMEs. The CMEs often come from the same region of the sun and can eject billions of tons of solar matter in the hours and days that follow. If the material ejected via a CME strikes Earth, it can trigger a geomagnetic storm, a temporary disturbance in our planet’s magnetosphere (the region of space surrounding Earth where the dominant magnetic field is the magnetic field of Earth, rather than the magnetic field of interplanetary space). These events aren’t harmless to living creatures on Earth’s surface. Our atmosphere protects us from any harm. But, ESA said:

These events can cause serious problems for modern technological systems, disrupting or damaging satellites and the multitude of services – like navigation and telecommunications – that rely on them.

Geomagnetic storms can also black out power grids and disturb radio communications. Solar particle events create a radiation hazard for astronauts in space, even serving potentially harmful doses of radiation to astronauts on future missions to the moon or Mars.

Read more: Are solar storms dangerous to us?

Cycle 25 – the most recent cycle of activity on the sun – has just begun. Solar activity is already ramping up. Check out this post for photos of a big sunspot that recently crossed the Earth-facing side of the sun.

The tweet below also illustrates that we’re beginning to see the first new sunspots and solar flares of solar cycle 25.

A category M4.4 solar ?flare? was recorded at the Sun today.
Here is an animation made from Proba 2/SWAP images.
Keep an eye on the #spaceweather with ESA's dedicated space weather portal ?https://t.co/qcul5lmV2x#SolarWarning#SpaceSafety pic.twitter.com/emwpvAZiyi

Bottom line: Video made from SOHO images shows 25 years of solar activity, including sunspots, flares, and coronal mass ejections breaking out from the sun.