The sun is becoming active again as it enters Solar Cycle 25. This week, scientists’ predictions of sunspots were proven via photos from astronomers around the world. Giant sunspot AR2786 can be viewed with proper filters and may create strong flares that reach Earth. 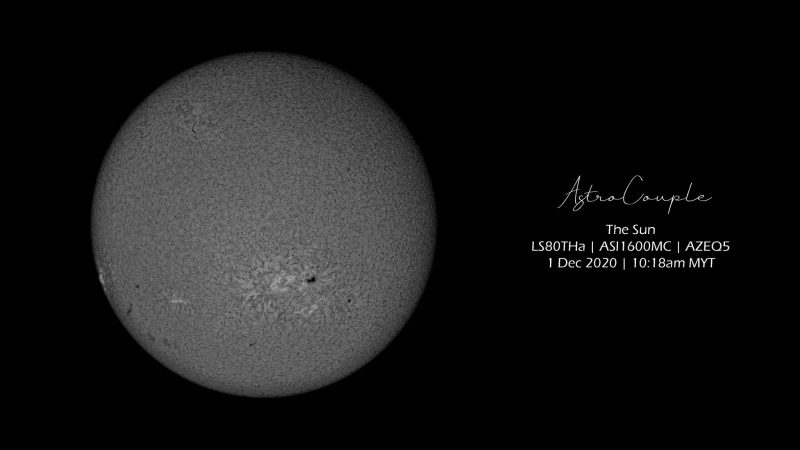 View at EarthSky Community Photos. | M. Luqmanul Hakim Muharam in Kota Kinabalu, Sabah, Malaysia, captured this photo of sunspots on December 1, 2020. He wrote: “While the sunspots AR2786 and AR2785 are clearly visible in this monochrome version of the chromosphere, a new sunspot is emerging numbered AR2790 at the sun’s eastern limb this morning. Another exciting sunspot member to observe from Solar Cycle 25.” Thank you, Luqmanul!

After a long stretch of quiet on the sun, solar activity has restarted in earnest. Now, with the beginning of Solar Cycle 25, astrophotographers are capturing clusters of spots as they rotate to face Earth. The photographers had advance warning that the solar storms were on the way and were prepared to capture the dark sunspots. On November 18, 2020, scientists at the National Solar Observatory (NSO) predicted a large new sunspot group would emerge in time for Thanksgiving in the U.S. The largest spot on the sun above, AR2786, confirms the scientists’ predictions.

Before we go on, a warning: never look at the sun directly without safe solar filters. Unprotected viewing of the sun can cause blindness. 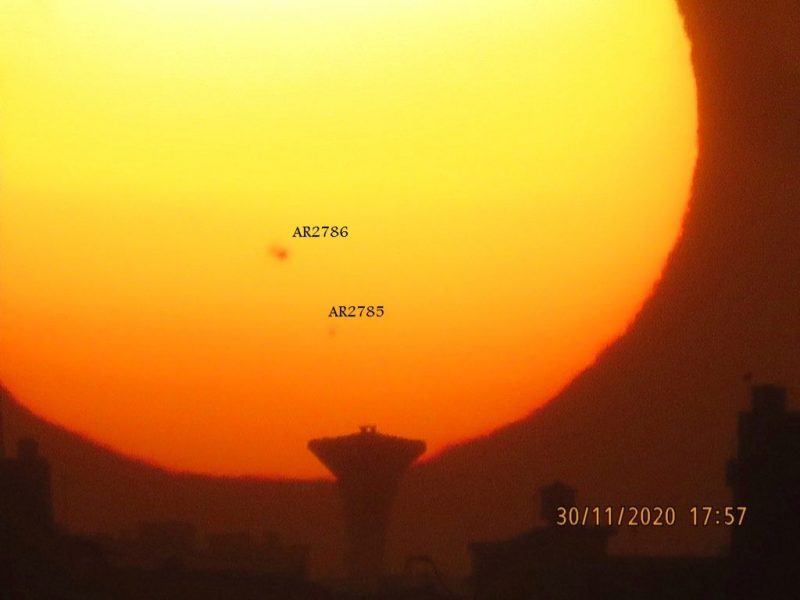 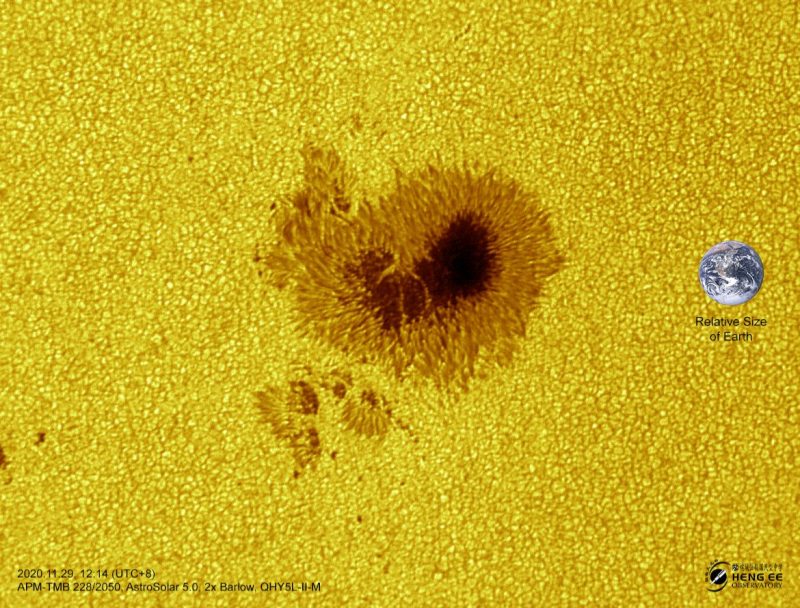 View at EarthSky Community Photos. | Michael Teoh at Heng Ee Observatory, Penang, Malaysia, captured this photo of sunspot AR2786 on November 29, 2020. He wrote: “Since the emergence of the huge sunspot AR2786, there has since been one whole week of cloudy mornings. Finally a less cloudy morning today allowing a quick imaging session on it. Taken with white light filter through relatively thick cloud.” Michael compares the sunspot to the size of Earth in this image. Thank you, Michael! 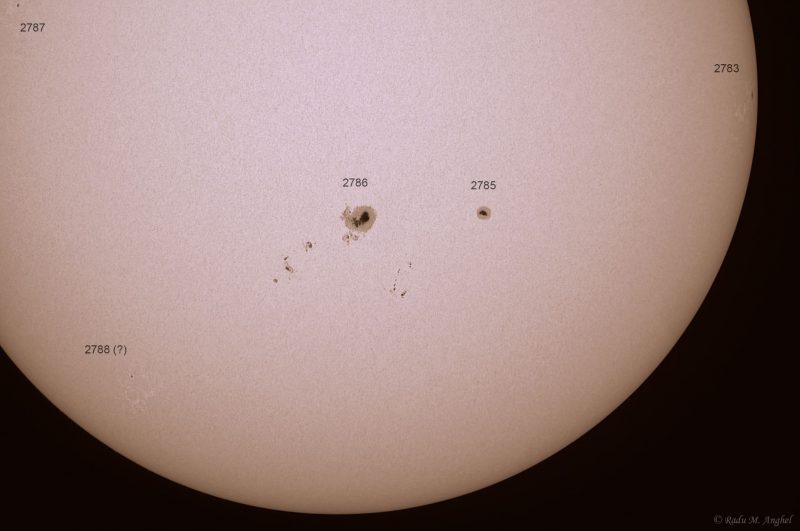 View at EarthSky Community Photos. | Radu Anghel in Bacau, Romania, captured this photo of an active sun on November 29, 2020. He wrote: “Lots of active regions on the Sun today!” Thank you, Radu! 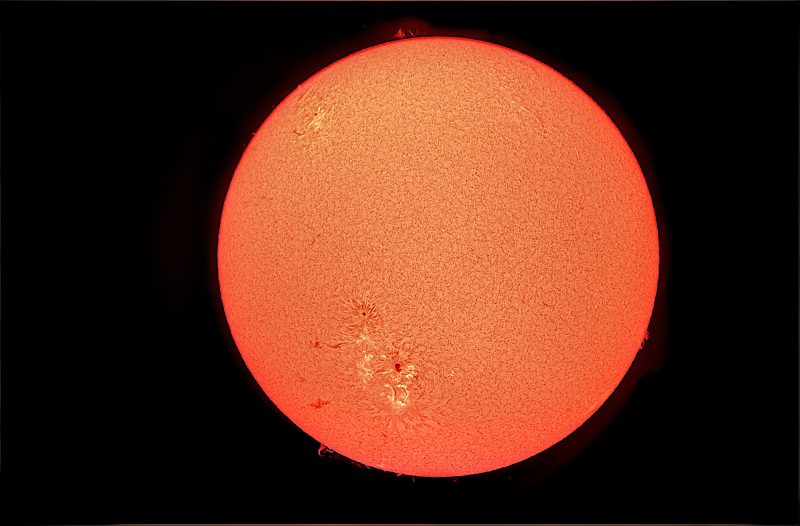 View at EarthSky Community Photos. | Nancy Ricigliano on Long Island, New York, captured this image of giant sunspot AR2786 on November 27. She wrote, “I have been so excited to see that we have sun activity. It’s been so quiet for a long time. I can’t believe how many Earths can fit into a sunspot.” Thank you, Nancy! After a long stretch of quiet on the sun, solar activity has restarted in earnest. Now, with the beginning of Solar Cycle 25, astrophotographers are capturing clusters of spots as they rotate to face Earth. 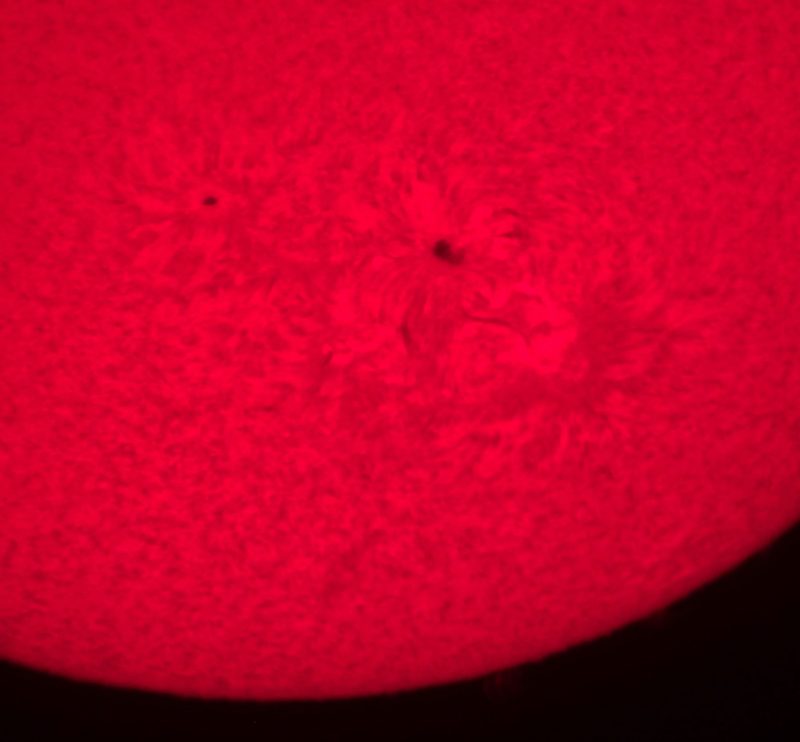 View at EarthSky Community Photos. | Victor C. Rogus in Sedona, Arizona, captured this image on November 27 and wrote: “Here we used an H-alpha filter tuned to the red glow of solar hydrogen. It shows dark filaments winding around AR2786, a complex magnetic field that harbors energy for M-class solar flares. Here we see AR 2786 and smaller AR2785.” Thank you, Victor! 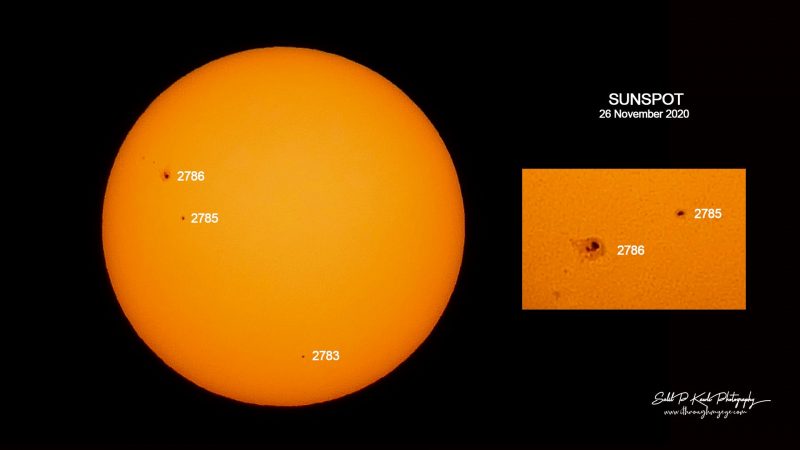 View at EarthSky Community Photos. | Salil Kawli in Mumbai, India, captured this photo of sunspots on November 26, 2020. He wrote: “Big sunspot AR2786 is getting bigger with the addition of multiple trailer spots.” Thanks, Salil! 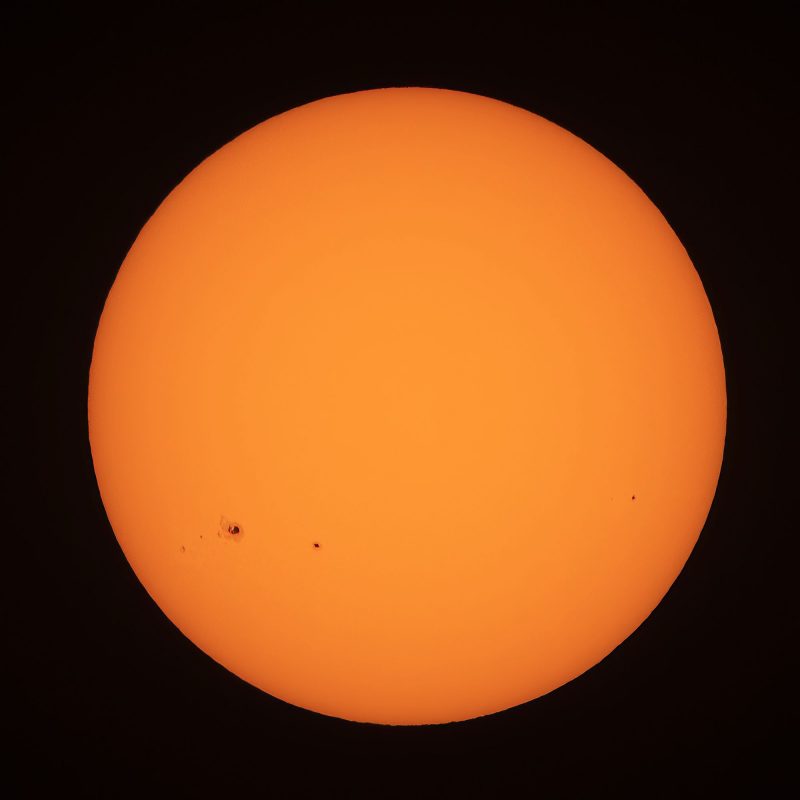 How did the NSO scientists know this spot would appear? Their prediction came via a technique developed at NSO in the 1990s, known as helioseismology. It’s a way of “listening” to changing sound waves from the sun’s interior. These scientists’ statement explained:

Seismology here on Earth measures sound waves traveling through Earth’s interior to reveal what we cannot see beneath the Earth’s surface. Similarly, helioseismology can highlight structures on the sun that cannot yet be seen from Earth. Millions of sound frequencies bounce freely throughout the sun’s interior, like a bell. Regions of strong magnetic fields perturb with these sound waves, thus a change in wave signal measurements indicates that sunspots may be present. 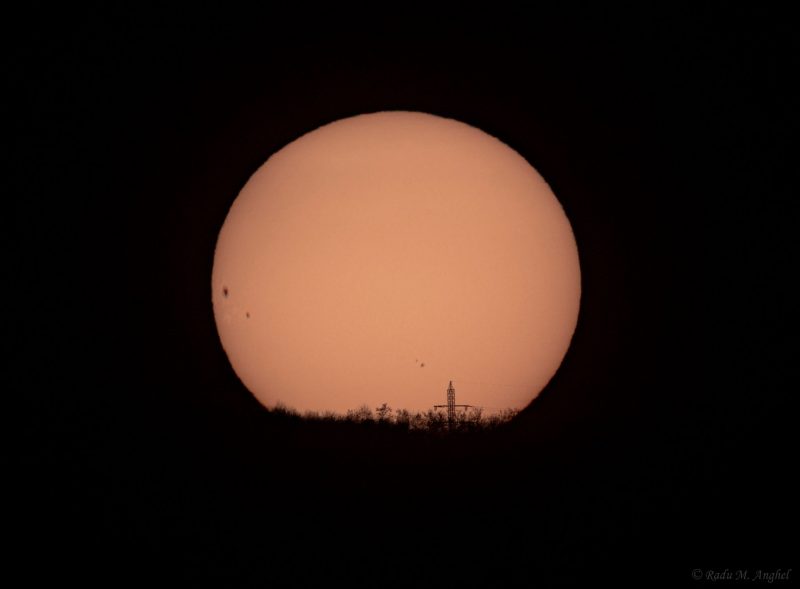 View at EarthSky Community Photos. | Radu Anghel in Bacau, Romania, caught AR2786 on November 24, 2020. He wrote: “It’s been a long time with no sunspot activity and now is comeback time. With the new sun cycle, we have an increased sunspot activity including, today, no less than three active regions: 2783, 2785 and 2786. The last one is a giant sunspot, several times bigger than Earth.” Thank you, Radu!

As seen from around the world, giant sunspot AR2786 will come into even better view in the days ahead, as the sun spins. It’ll be possible to glimpse with optical aid using safe solar filters, or by using an indirect viewing method. Here are 7 tips for observing the sun safely.

Kiran Jain, the scientist who is leading the efforts at NSO to predict coming sunspots via helioseismology, said that the large sunspot AR2786 produced:

… the strongest far-side signal we have had this solar cycle. We first noticed the signal in our far-side images on November 14, 2020. It was inconspicuous at first but grew quickly, breaking detection thresholds just one day later. Since we are in the very early phase of the new solar cycle, the signal from this large spot stands out clearly. 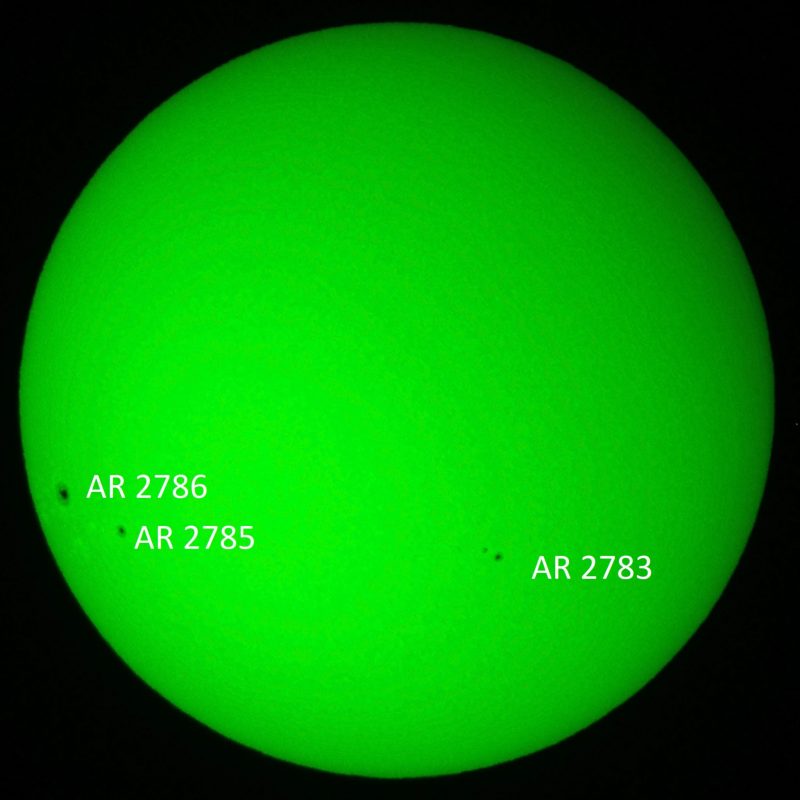 View at EarthSky Community Photos. | Victor C. Rogus in Sedona, Arizona, captured AR2786 on November 24, too. See how the spot is farther from the edge or “limb” of the sun now? The sun’s rotation is bringing it into better view. Thank you, Victor!

Solar storms are disturbances on the sun whose effects move through our solar system, sometimes striking Earth. They’re often seen to originate in the same region of the sun as sunspots, especially large, complicated sunspots like AR2786. Earth’s atmosphere protects earthly life from the effects of solar storms, but solar activity does affect our human technologies. The NSO statement explained:

The more tangled the magnetic field, the more likely it will result in large solar flares and coronal mass ejections that, in turn, can result in … effects at Earth. These include impacts on communications, GPS and possibly electrical grid systems.

So, when a sunspot like AR2786 occurs, solar scientists and other sun-watchers start watching for solar storms, and the sudden, bright solar flares that go with them. This activity on the sun creates what is called space weather, which NASA describes as:

… conditions on the sun, in the solar wind, and within Earth’s magnetosphere, ionosphere and thermosphere that can influence the performance and reliability of space-borne and ground-based technological systems and can endanger human life or health.

According to the website SpaceWeather.com, the smaller sunspot AR2785, which is near AR2786 on the sun, has already produced a C4-class solar flare, late in the day on November 23. SpaceWeather reported:

The explosion hurled a plume of plasma more than 350,000 km [217,000 miles] across the sun. NASA’s Solar Dynamics Observatory recorded the splashdown [see the animated image below].

SpaceWeather reported that a pulse of ultraviolet radiation from AR2785:

… hit Earth, briefly ionizing the top of our atmosphere. This, in turn, caused a shortwave radio blackout over the South Pacific, including eastern Australia and all of New Zealand: blackout map here. Frequencies affected were mainly below 10 MHz.

More solar flares are in the offing. Three of the biggest sunspots of young Solar Cycle 25 (AR2783, AR2785, AR2786) are either facing Earth or turning in our direction. They all pose a threat for C-class flares (like the one shown below) with a slight chance of even stronger M-flares.

On November 23, 2020, a solar flare from the smaller sunspot near AR2786 – AR2785 – hurled a plume of plasma across the sun that ultimately affected Earth. This sort of event is why scientists study activity on the sun. Image via NASA SDO/ SpaceWeather.com.

The National Solar Observatory helps track these events on the sun, via its GONG network, which consists of six monitoring stations positioned across the globe. The six stations give the GONG network 24-hour coverage of the sun. 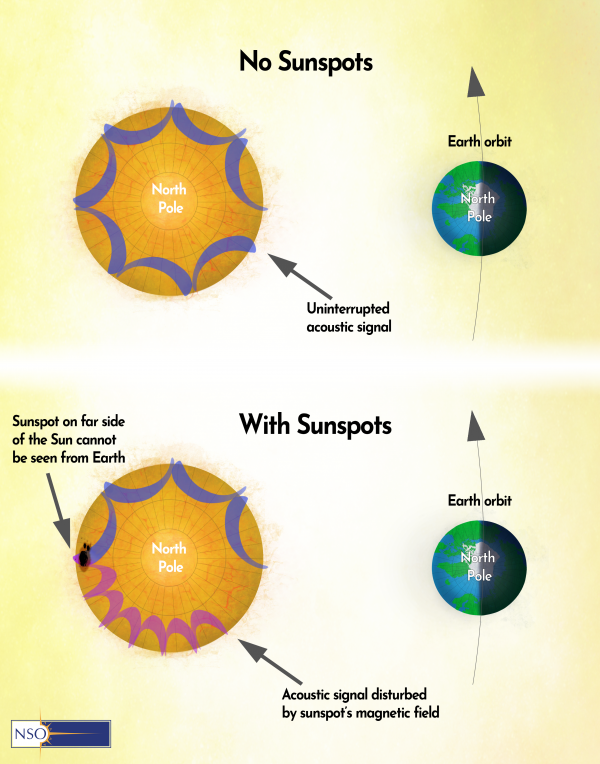 The NSF-funded GONG network uses sound waves to measure changes inside the sun indicating sunspots on the side pointing away from Earth. These diagrams of the sun’s internal acoustic waves with no sunspots (top panel) and with sunspots (bottom panel) show how the sunspot’s magnetic field perturbs the acoustic waves, changing their signature. Measuring this change allows scientists to predict sunspots on the far side of the sun. Image via NSO/ AURA/ NSF. 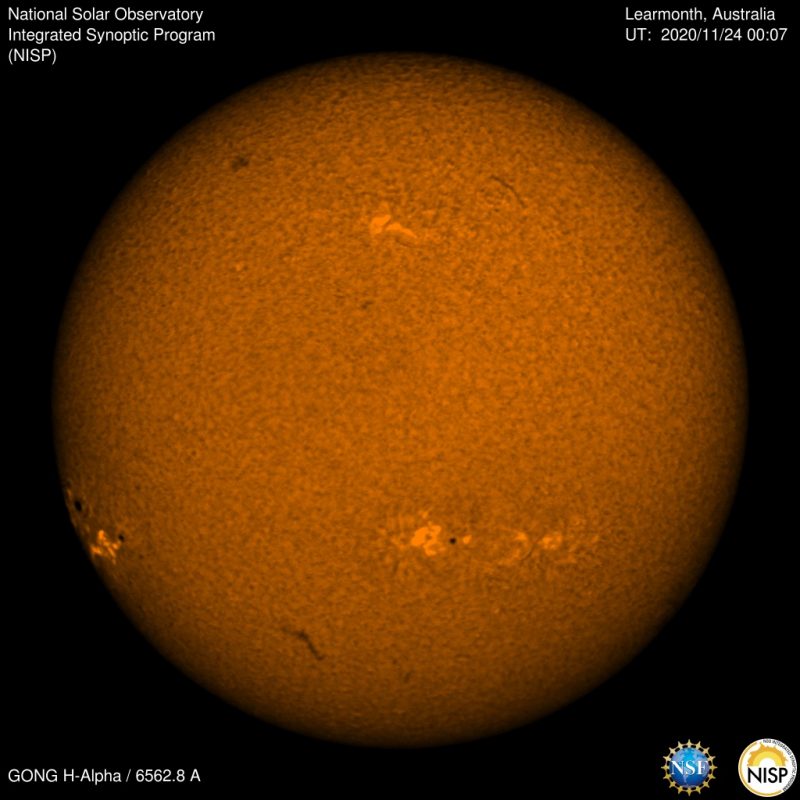 Giant sunspot AR2786 as seen from Australia on the morning of November 24, 2020. The sunspot is on the very edge, or “limb” of the sun, in nearly the 9 o’clock position; the image shows AR2786 just as it rotated into view. Image via NSO. 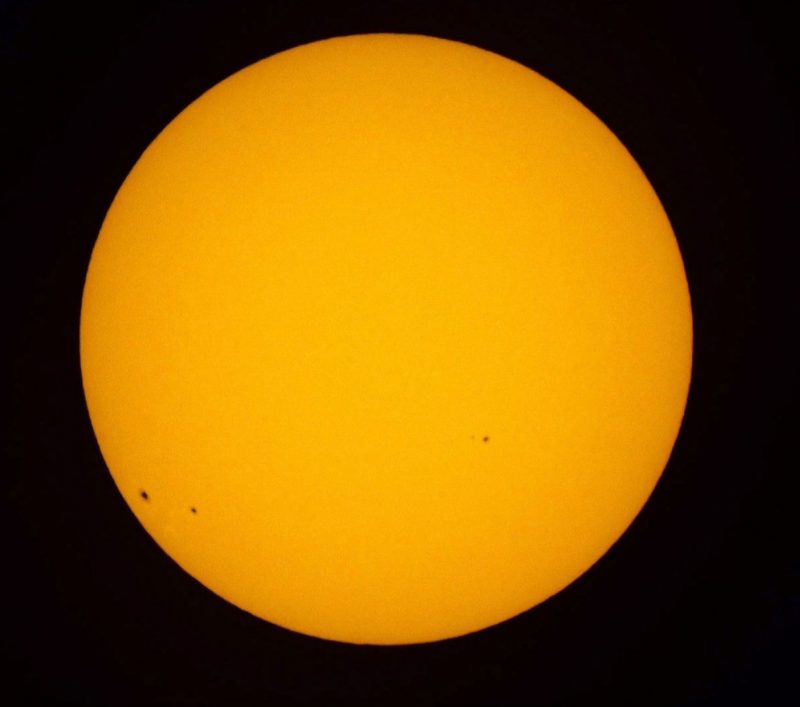 View at EarthSky Community Photos. | Aurelian Neacsu in Visina, Dambovita, Romania, captured giant sunspot AR2786 on November 24, 2020. In this image, the sunspot is the large dark region in about the 8 o’clock position on the sun, near the edge or “limb” of the sun. A small dark spot – called AR2785 – is immediately to its right. Thank you, Aurelian.

Bottom line: The sun is becoming active again as it enters Solar Cycle 25, and scientists’ predictions of sunspots have been proven by photos from amateur astronomers around the world. Giant sunspot AR2786 can be viewed with proper filters and may create strong flares that reach Earth.