What happens when young stars brush past each other? A lot, according to a new study suggesting our solar system contains comets stolen from another star 4.5 billion years ago.

I love the video above. It shows what happens when two young stars – still surrounded by their disks of planetesimals, or planet-building blocks – encounter each other. It’s based on recent computer simulations, part of a newly published study by astrophysicists at the University of Zurich, describing how our solar system likely contains comets stolen from a star that swept near our sun 4.5 billion years ago. Stars like our sun are born in clusters. Our sun is thought to be about 4.5 billion years old. So we’re talking about the very young sun here, newly emerged from the cloud of gas and dust that created it and its sister stars. The new study says that, when two young stars meet, their encircling disks mix it up, literally. In particular, the outer planetesimals of the smaller star are heavily disrupted by its higher-mass sibling. Some planetesimals – chunks of rocky or icy material – switch from one star system to the other. They are “stolen,” in other words.

And some planetesimals leave both star systems behind entirely. Tom Hands, who led the new study, explained:

[The encounter] causes a bunch of planetesimals to be ejected, flying away to become things like ‘Oumuamua [the small interstellar object that recently swept near our sun]. I was surprised by the number of ‘Oumuamua-like free-floating objects that can be generated in an environment like this on a relatively short time-scale.

‘Oumuamua is a now-famous object among astronomers, who noticed it and began tracking its movement through our solar system in 2017. Though many free-floating objects are thought to exist, ‘Oumuamua is the only small interstellar object seen moving in our solar system so far. It’s not attached to our sun, or any star. That’s how it received its name, which is Hawaiian for “a messenger from afar arriving first.” Astronomers don’t know where ‘Oumuamua came from, exactly. Speaking about the new study, Tom Hands and his colleagues’ statement said:

… it is clear that free-floating planetesimals, comets and asteroids should be ubiquitous in the galaxy. 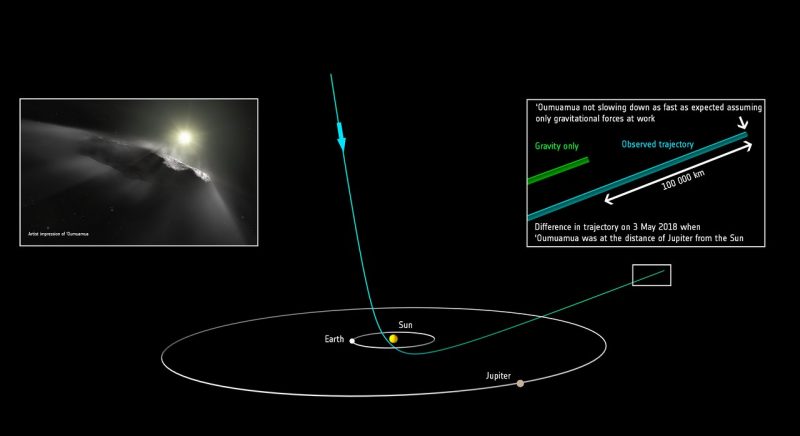 This diagram shows the path of the interstellar object ‘Oumuamua – the first known interstellar object to pass through our solar system – as it was sweeping toward our sun in late 2017, rounded the sun, and then began moving outward again. ‘Oumuamua passed the distance of Jupiter’s orbit in May 2018. It passed the distance of Saturn’s orbit in January 2019. It will reach a distance corresponding to Neptune’s orbit in 2022, according to some studies. Image via SpaceTelescope.org.

‘Oumuamua made headlines after it was discovered in October 2017. Many theories have been suggested to explain its origin, including the possibility of its being an alien spacecraft.

Researchers at the University of Zürich used large computer simulations to show how ‘Oumuamua-style objects can be set on their solitary paths through space. They calculated what happens when multiple young stars are born together in a stellar cluster, much as our sun is thought to have been 4.5 billion years ago. Most of what astronomers call planetesimals – the building blocks of planets – ultimately do become planets, comets and asteroids while the stars are still in their infancy. But not all do. Tom Hands commented:

Coming into close contact with other stars can have a profound effect on these planetary systems.

I was also surprised by the ease with which stars can steal material from their stellar siblings at a young age. 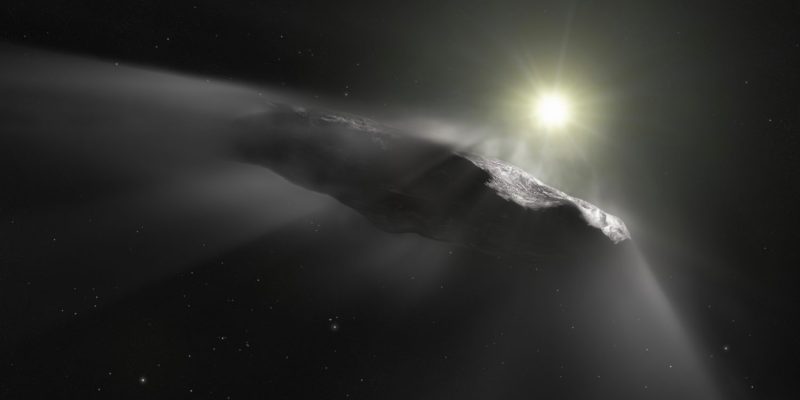 Even now, our sun might retain alien comets stolen from another star in these early phases. Hands said:

Even if alien material is really there, there likely isn’t much of it. But we might be able to detect it based on the strange orbits this stuff could be on.

Hands said his research has relevance to the ongoing search for a ninth planet in our solar system, which is based on an odd alignment of orbits of small objects in the outer solar system. He said the results of his study suggest that a large, unseen ninth planet isn’t the only plausible explanation for this observed alignment. Hands commented:

People should keep an open mind when considering how these things might have ended up on the orbits they are on.

This is the first time we have been able to get a feeling for how the cluster environment could affect our Kuiper belt, or similar structures in exoplanetary systems

And I don’t think he’s boasting there. It seems like novel research to me. Forty-plus years ago, when I started writing about astronomy, we’d sometimes hear astronomers say that comets in the Oort Cloud could be dislodged by “passing stars” and thereby be sent hurtling in toward our sun. I always wondered which passing stars, and when, and what went on there? To my knowledge, this study doesn’t relate specifically to Oort Cloud comets; it does talk about objects in the Kuiper Belt, though, which are also in our solar system’s outer reaches, at a lesser distance from our sun. Both Oort Cloud and Kuiper Belt material would surely be affected by an encounter with another star 4.5 billion years ago. It’s great to have an actual simulation, at last, that provides concrete images of this long-discussed encounter.

And, by the way – on an entirely different subject – I found a second super cool video at Tom Hands’ website, also based on his computer simulations. You might enjoy it, too, so I posted it below. It’s an exoplanet visualization, based on data from the Open Exoplanet Catalog. He described the video below as:

… a flyby of all known exoplanets around single stars. The systems are ordered according to the largest semi-major axis (planet-star separation) within each of them, from largest to smallest. The systems that you fly past first contain planets which takes hundreds or even thousands of years to orbit their stars, while by the end they take mere hours or days. Designed to give the viewer an overview of the current distribution of exoplanets.

Bottom line: A new study from Tom Hands and colleagues at the University of Zurich suggests our solar system contains comets stolen from another star 4.5 billion years ago. The interstellar visitor ‘Oumuamua might be an example of an object dislodged from its original solar system in that way. According to this study, there might be many free-floating objects like ‘Oumuamua in our galaxy.

Source: The fate of planetesimal discs in young open clusters: implications for 1I/’Oumuamua, the Kuiper belt, the Oort cloud and more