LIFTOFF of #Falcon9 and #Dragon on the CRS-6 mission to resupply the space station for @NASA. https://t.co/tdni5406Hi pic.twitter.com/K4umPf48X2

The SpaceX Falcon 9 rocket had an apparently flawless liftoff today (April 14, 2015), releasing its Dragon spacecraft on a trajectory to the International Space Station, with its load of supplies and other cargo. Liftoff took place at approximately 4:10 EDT from Space Launch Complex 40 at Cape Canaveral Air Force Station in Florida. SpaceX tried again today to make history by bringing the first stage of its Falcon 9 rocket back to Earth for a soft touchdown at sea. It did hit the floating target – a barge recently christened Just Read the Instructions – but too hard. SpaceX founder Elon Musk (@elonmusk) reported on Twitter:

The Dragon spacecraft will dock with ISS Friday morning, April 17. It is now on its own in orbit and operating with its arrays deployed as planned. At ISS, astronauts will use the station’s 57.7-foot robotic arm to reach out and capture the spacecraft as they operate from the station’s cupola. Arrival is set for Friday at 7 a.m. EDT (1100 UTC).?

Monday’s attempted launch of the SpaceX Dragon was scrubbed due to weather.

Watch replays of the SpaceX launch via NASATV

Ascent successful. Dragon enroute to Space Station. Rocket landed on droneship, but too hard for survival. 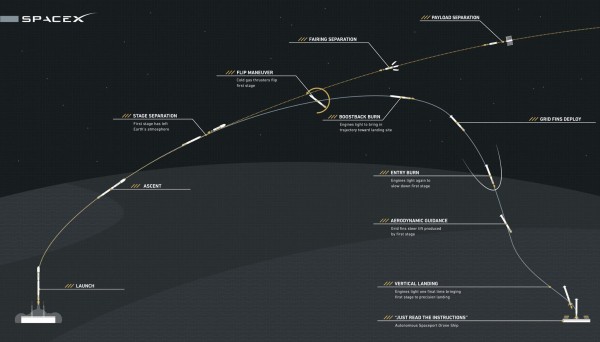 View larger. | Infographic from Space X shows how its Falcon 9 wants to accomplish a first-ever successful soft landing at sea. Image via SpaceX.

SpaceX has been trying to land the first stage of its Falcon 9 rocket on a platform floating in the Atlantic Ocean. The last attempt at a reusable-rocket maneuver, during the last Dragon cargo launch in January, crashed into the 300-by-100-foot floating platform and burst into flame.

The video below shows the January landing attempt: 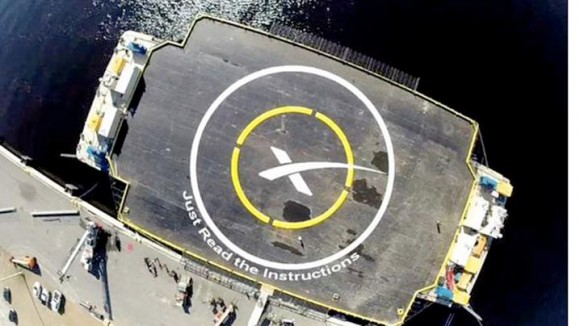 This is the floating landing platform in the Atlantic. The barge, formally known as the Autonomous Spaceport Drone Ship, has been re-christened with the name Just Read the Instructions, after a ship from science fiction writer Iain M. Banks’ Culture novels.

The Dragon capsule is now heading to ISS, filled with more than 4,300 pounds of supplies and payloads, including critical materials to directly support about 40 of the more than 250 science and research investigations that will occur during the space station’s Expeditions 43 and 44.

Science investigations that are launching on Dragon include commercial and academic payloads in myriad disciplines, including: exploring new ways to possibly counteract the microgravity-induced cell damage seen during spaceflight, studying the effects of microgravity on the most common cells in bones, gathering new insight that could lead to treatments for osteoporosis and muscle wasting conditions, continuing studies into astronaut vision changes; and testing a new material that could one day be used as a synthetic muscle for robotic explorers of the future.

After about five weeks at the space station, Dragon will return to Earth filled with more than 3,000 pounds of cargo including crew supplies, hardware and computer resources, science experiments, and space station hardware.

Falcon 9 and Dragon undergoing prep in FL in advance of 4/13 launch to the @Space_Station https://t.co/0KGddcVzV0 pic.twitter.com/7Fwc9W1jWh 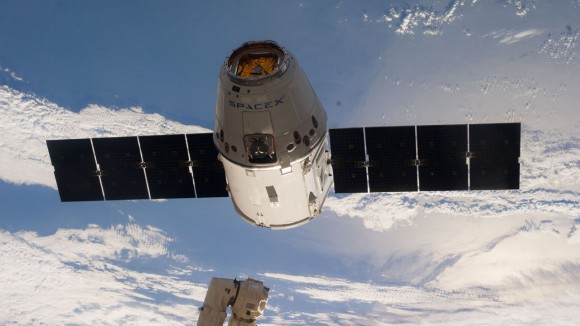 Bottom line: Successful liftoff for SpaceX’s Falcon 9 rocket, as it soared spaceward on Tuesday, April 14, 2015, heading toward the International Space Station. SpaceX again tried to make history by bringing the first stage of its Falcon 9 rocket back to Earth for a soft touchdown at sea, but the rocket again came down too hard.